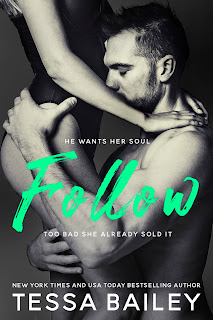 He wants her soul. Too bad she already sold it.

Family is everything to gambling den darling, Teresa Valentini. Blood comes first, especially before men. So when her brother lands himself in hot water, she’s willing to do whatever it takes to save him. And showing up topless in her unwitting savior’s motel room is turning out to be the furthest thing from a hardship…

Will Caruso is the bad boy of New York’s financial scene…and he just found out the very thing that drives his success is a damn lie. Now, he’s exchanged his high-stress life for the open road, no one but his Great Dane…and half a million Instagram followers to keep him company. When a mysterious beauty arrives, her secrecy prods his suspicions, even while she tempts his lust to the breaking point.

Teresa met Will under false pretenses, but the bond consuming them is real. They’re strong enough to overcome a little betrayal…aren’t they?

Before I begin my review, just a small disclaimer... I received a review copy of this book in exchange for an honest review. This in no way affected my opinion. The review copy came from the author but the source of the review copy matters very little to me in terms of formulating an opinion. (In terms of legal issues... definitely. Please don't pirate. This book is so cheap!)

This is Tessa Bailey's first self-published novel, which might come as a surprise to some, because she has written and published so many adult romance novels, with small and big publishing houses. Nevertheless, Follow is her first foray into the self-publishing world. Self-published, traditionally published, it doesn't matter - her stories are so uniquely Tessa Bailey, with the hot, steamy romances, the intense romances, and the always-satisfying happily-ever-afters. Tessa Bailey is in a class all on her own when it comes to romance novels. Follow is one of her best yet.

There is Will Caruso, the son of a notorious crime boss in New York; the guy who has been vacationing for over a month, going to different places with his Great Dane; the guy who is filthy rich and has a successful company but wants nothing more to spend time with his dog - and away from his criminal father. And then there is Teresa Valentini, a young woman who loves her last family member - her brother - more than anything; a woman who is willing to make a deal with one of the most notorious crime bosses in New York in order to save her brother; a woman who didn't mean to fall for the crime boss's son - but did. She set out to seduce him and make him follow her back to New York, but instead she ended up falling for him - and he her. But what happens when the jig is up, and Will finds out who she really is?

One might think, on the surface, that this is a sexy romance novel with a lot of sex and not much else going on. But that person would be so wrong. Like any of Tessa's books, this story has so much depth, especially in terms of the characters. I'd say this book has even more depth, with the deception, the guilt, and the tumultuous and intense connection that Will and Teresa share. Both characters are so well-written and fleshed out; it was hard not to love them.

I especially loved Will, with his wicked and charming exterior and soft, warm interior. He is very smart, very driven, and very stubborn. He is so physical and male and a little bit aggressive, but not in an alphahole kind of way (though he is definitely an alpha). The respect and care he shows Teresa overshadows his protectiveness and occasional possessiveness. He's the type of alpha I like - dominating and commanding, yet sweet and caring without been forced.

And there is the fact that he basically went on hiatus with his dog, who he loves so much. His dog has a sickness and Will decided to throw caution out of the window and spend as much time as possible with his best friend. This was what inspired Follow, and there is a real Instagrammer that did this, and I think it's the sweetest thing.

I liked Teresa, with her bravery and strength and her determination to protect her family (in this case, Nicky, her brother and last surviving relative). She doesn't stop to think when he calls her and is in trouble - she just gets up and goes. Despite her deception (deceiving Will), she is a good person who was trying to save her brother. Falling for Will wasn't the plan and she definitely didn't plan on things going as far as they did.

This book. Is. HOT. Quite possibly Tessa's hottest book to date. This is the kind of book that is kinky without being hardcore "erotica", or BDSM, or anything like that. There is light dom-sub aspects to it, though not in a disciplined way. It takes some time before the steamy scenes really starts lighting up the pages, but the chemistry is always present from the moment Will and Teresa meet. I loved how Teresa grew more and more comfortable with her preferences and fantasies. I love how Will treated her so well, and how they seemed to fit together. There is no denying their physical connection.

But there is no denying their emotional connection too. They fall for each other day after day, and not just because of the hot sex. Teresa sees how good of a man Will is, and Will sees how strong and fun of a person Teresa is. They bond and connect and it doesn't take much for them to fall in love. The timeline of this book is short, but you can feel them falling for each other

I wasn't worried about a HEA but I was slightly worried about the climax of the book, because of the obvious impending drama... clearly Will had to find out at some point, and of course he would be angry (justifiably so). But there was a lot less drama than I expected, in terms of the romance at the climax. Will and Teresa work things out fairly well, and I was on board with who did the apologizing (both of them), who did the chasing, who took the blame, who felt bad, etc.

All in all, this book was a fantastic read. It was classic Tessa Bailey, though it felt a little different. Maybe because it was hotter, maybe because it felt a little longer (that's a good thing), maybe because the concept of the story was a little different (crime/deception/underhand deals, etc.). But in any case, this is definitely a book I'll be thinking about in the future, and definitely in my top five favorite Tessa Bailey books.

I personally thought Tessa Bailey could have gone even further in terms of the sex in this book. There were so many potential scenes that seemed to set themselves up in this book, but they didn't happen. But then I suppose if the author wrote out every dirty scene between the hero and heroine, the book would be ten thousand pages long. BUT. There was a nagging feeling in the back of my head that the author could have gone a little further... or maybe a little more in terms of what she had.

Also, is it bad that I still don't know what Nicky was doing for Silas (Will's father)? Like what kind of crime ring Silas was running and how Nicky was involved? This could have been more explicit. It felt alluded to. Not a huge deal though.

Any Tessa Bailey fan should read this because it is one of her best, definitely not to be missed. I recommend this to people who haven't read any of her books and lot steamy hot adult romance novels - this is definitely a great place to start. You'll be hooked on Tessa Bailey's books in no time. This standalone is the type of book that is hotter than an "adult romance novel" but not quite "erotica" - but it's so hot and so enjoyable too, in terms of the story and the characters.

4 stars. I know this is a standalone but I wouldn't mind reading another epilogue with the pair. I love their physical dynamic and I honestly wouldn't mind seeing more of it in adult romance. Tessa Bailey did a great job with this story and I hope she continues to self-publish!