Review: The Negotiator by HelenKay Dimon 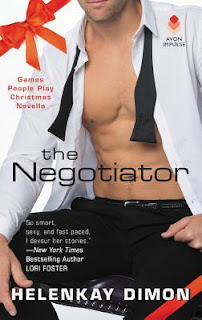 Lauren Gallagher’s life changed almost three years ago. After her husband disappeared at sea, she was left with a failing pleasure boat company and more than a few secrets. Now, after years spent rebuilding the business and paying off the pile of debts, she finally feels in control. But when she finds her husband, actually dead, on the floor, she becomes the leading suspect in his murder investigation.

Garrett McGrath wants Lauren in his bed, not his heart. He doesn’t do emotions, but every time he sees her, holding himself back gets harder and harder. When Lauren comes under suspicion for killing her previously presumed-dead husband, he knows he has to help her, any way he can.

But as the danger becomes more intense and Garret and Lauren grow closer than either planned, they’re in danger of losing everything…including their hearts.

This is one of those cases in which I'm like, "it was good buuuuuuuut...". I love HelenKay Dimon's books and haven't been disappointed yet. My favorite of hers is probably Mine, a book in another series. The Games People Play series has been pretty good so far - not as steamy as I expected, but very intriguing in terms of the light suspense and mystery. I'd been waiting for Garrett and Lauren's story since reading book one because they have a lot of great chemistry in the first two books. Now that I've read this novella... I don't necessarily think there was anything wrong with the novella - I think it was my preferences that got in the way of me loving it.

Garrett McGrath has been chasing Lauren Gallagher for months, but she has turned him down every time he asks her out. He doesn't usually do the chase, or invest so much time and effort into one woman, but something about Lauren has always drawn him to her. Lauren's husband was declared dead after he went missing at sea... but one day, suddenly, he show up, very much not dead, and still the infuriating money-seeking idiot who is trying to get his hands on her house. By the end of the day, he is dead in her house. It wasn't Lauren, but as the estranged wife, she is the primary suspect. She calls Garrett for help, and with him comes Matthias and Kayla. Secrets are revealed and suspects are discovered, but it's Garrett and Lauren's love life that begins to unfold.

I adored Garrett, mostly because he is so dependable and kind. He is always there for Lauren, and his friends too. He is very protective and stubborn, and he's a very good negotiator. I like that he never backed down and never gave up. He might be a nice guy, but he is a hardened former spy that knows how to get what he wants. He is a good guy, probably too good for Lauren.

I didn't love Lauren, but parts of her I liked or at least understood. Mostly I didn't like her. But of course you have to feel bad for someone who ended up with such a crappy husband - the crazy ones don't always seem crazy at first.

The mystery of whodunit seemed obvious to me from the start, though Dimon tried to keep readers off the trail for a little while. It's a short book (a novella) so you start to see the real suspect quickly. That made sense and Dimon wrote the motives and purpose really well.

Despite this being a short book, there were a few good sexy times, and Dimon always write good chemistry. Of course I found this series in general to be less steamy than some of her previous series, but the chemistry is always cooked up well.

The ending is cute and definitely a happily-ever-after. Garrett and Lauren have a lot to figure out, but they clearly fit together well. Garrett is such a nice guy and I'm glad he got his HEA. Lauren too, for all the crap she had to put up with her former husband. This was a short, quick read that is a great addition to the series, if you're a fan of the books (or Dimon's books in general).

I really didn't connect with Lauren. Maybe because she was so walled off? Maybe because she pushed Garrett away one too many times? Even when she was pulling him closer, I didn't like how she didn't see him as the real deal...

... Which leads me to the next thing I don't like and haven't liked in many adult romance novels that I've read recently. Can we stop with having an alpha female s**t all over a nice, sweet, selfless hero? Why is it that heroes these days FALL OVER THEMSELVES to cater to the heroine, and the heroine simply pushes him around, uses him, takes advantages, whatever, and this is okay? I truly disagree with this brand of feminism (or whatever it is). Check yourselves, ladies. Of course, this could be part of a "fantasy" in romance - a man who caters to your every whim and you treat him like crap and he's still there. That's a really odd fantasy and I personally am not a fan. That just seems so disrespectful to another human being.

In terms of the conflict resolution, I really dislike that it was Garrett to come back and apologize. No no no no no. Lauren needed to be doing the grovelling. Garrett did very little wrong.

Lauren was also really clueless, which bothered me because she was supposed to be this smart and sexy woman. Instead she seemed... kind of average and very ditsy?

Also? Small thing but this is supposed to be a Christmas novella and I barely got any Christmas vibes. I love Christmas! I wanted more Christmas! Whenever Christmas was managed (the few times), it was always depressing. Sad life!

I recommend the other books in the series (The Fixer, The Enforcer), but this novella could be skipped. Of course, fans of the series should try it for themselves, but if you're only now getting into the series, skip this novella. I generally skip novellas because they add so little BUT this one was good because it had a complete love story. It's just too bad I didn't like the heroine.

3 stars. I hate 3-star reviews! They're so hard to write. I think I would have completely loved this book if I had liked the heroine. I felt frustrated by her and didn't really care for her tough-girl act and her clueless self. But I liked Garrett a lot and I can never get enough of happily-ever-afters. I'm hoping to be reading the next book, The Pretender, very soon!