Review: So I Married a Sorcerer by Kerrelyn Sparks 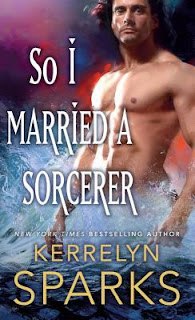 Growing up on the Isle of Moon, Brigitta knows nothing of her past, except that she is Embraced: born with powers that forced her into hiding. Everything changes when she learns she’s a princess, hidden away from her villainous half-brother who now rules the kingdom. But he knows about Brigitta, and he’ll do anything to get her back. Unless a certain roguish pirate has anything to say about it…

Rupert is both an infamous pirate and a sorcerer with the power to harness the wind. He’s been waiting nineteen years for revenge—and he needs Brigitta to get it. What begins as a kidnapping of the fiery beauty turns into a fierce attraction. But can he win the captive princess’s heart?

So far, this series has been a delight. I can't remember the last time I had so much fun reading a fantasy/paranormal romance novel! I mean, I'm sure I've read fun ones in the past, but somehow, this series seems to stick out to me. I adored How to Tame a Beast in Seven Days, and I am happy to say that I loved this companion sequel just as much!

This book follows Brigitta, one of the five orphans at the convent on the Isle of Moon. Luciana is now a queen, living with her husband the king and pregnant with twins. The other three girls, including Brigitta, are on the way to visit Luciana and Leo, when their ship is taken over by the military. As it would turn out, Brigitta is a hidden princess, and her half-brother (a king) wants her to to come back to the kingdom. Brigitta hands herself over to pirates (who were lying in wait) in order to save her friends and in order to be safe from her half-brother's military. The pirates are commanded by Rupert, a wind sorcerer who is bent on getting revenge on Gunther (Brigitta's half-brother). Brigitta is now Rupert's captive, but Rupert finds that he doesn't want to use her for his vengeful means. Brigitta knows she should despise the pirate, but the rogue is not as dastardly as his pirate's reputation would make him out to be. There is something more to Rupert, something beyond his pirate lifestyle and Embraced abilities. Rupert is hiding something that could change his and Brigitta's lives forever.

The best way to describe this book is fun and romantic. It has such a light tone to it, and it's also so sweet and occasionally steamy. There were many times when I chuckled out loud, and sighed, and smiled. This is a romance novel that you don't have to be in the mood to read. It is drama-free, angst-free, etc. Such an enjoyable read!

Brigitta is the type of heroine that I would love to be friends with, in real life. I can see parts of myself in her, so I relate to and understand her (even though obviously we have such different lives, ha!). She is kind, selfless, and sweet, and innocent in many ways. But she is also fierce and loyal and determined. She isn't totally strong-willed and kickbutt and gutsy like many of the heroines we see in romance today. I respect those heroines, but I love this different type of heroine. The kind that is sweet and innocent, but also strong and assertive in her own way.

And then there is Rupert, who is a perfect foil to Brigitta. He is tall, handsome, muscular, commanding, and simply put, big. He has a presence and an air of leadership about him. He is secretive and reveals little about himself, but he is very selfless and chivalrous. He does kidnap Brigitta but he lets her go pretty quickly - in a sense. She doesn't leave him even when he tells her that it is her choice, partly because he can protect her, partly because she was already interested in him.

The romance is so sweet and swoony! You might think, Stockholm Syndrome much??? But that is not present in this story. Brigitta isn't quite held against her will - okay, she is, but she isn't. It's hard to explain. Rupert gives her the choice to go but she leans who he is, and she decides to fight with - and for - him. I love the progression of the romance! They have instant chemistry from the start, and there are some seriously steamy moments between them as the story goes on. I liked seeing Brigitta break down Rupert's walls and I liked seeing him let her in. These two are so sweet together, and they get along so perfectly. A balanced pair, not without their faults.

We get to see a lot of the characters from the previous book, especially Brody! Brody is the coolest messenger/friend. I like how he watched over Brigitta and also gave Rupert a chance. I loved seeing the tiny cameos of Luciana, Leo, and the new presence of their twins. Too bad we don't get to know the twins' names though. We also get to see the other three orphan girls, and we get a peek into their futures. I can't wait to read their books!

Some of the new characters that I loved were Stefan, the captain of Rupert's ship, and Sister Fallyn, who wasn't technically new because she is a nun at the Isle of Moon. But the two of them have their own romance going on, which is hilarious and adorable. It was fun to see the captain and the nun skirt around each other and still fall for each other.

This book has a fairly fast pace, though it isn't overwhelmingly so. I appreciated the quick pace and the constant change of events. All of the action was exciting and interesting. You will never be bored if you pick up this book! Heck, I feel like rereading it already. It's not just a romance novel. The plot surrounding the story - Brigitta's impending meeting of her evil brother, her brother's plans for her, Rupert's plan for saving her, etc. - is just as engrossing as the unfolding romance.

All in all, this book was so fun and wonderful. My heart is happy and full. I hope the rest of the series continues to be this lovely to experience!

I can't think of anything specific, other than I wanted more sexy times between Rupert and Brigitta! There were only two sexy times (and one wasn't actually sex?) and hey, this is a full-length novel. Let them get it on! Don't get me, wrong the tension building up to things was really well-written. But the one sexy time happened towards the end. There needed to be one or two more!

Anyway that's not a deal-breaker. The chemistry is hot, so I wanted more, but that's okay!

If you like adult paranormal romance, or adult fantasy romance, or simple adult romance in general, definitely try this series. How to Tame a Beast in Seven Days was excellent, and this new book was just as great. I love the pairings - sweet girls and sexy, commanding men. I know the trope isn't for everyone but I love it!

4 stars. I can't wait to read Eight Simple Rules for Dating a Dragon! Dragons are my favorite! There are some dragons in this book, so maybe one of them will be important in the next book. It could not come soon enough!