Welcome to the review and excerpt tour for Dragon Burn by Donna Grant! I have read this novella and I can confirm that it is fiery hot. (See what I did there??? Ha! I'll see myself out.) :D Below I have my review, and there is an excerpt. Enjoy! 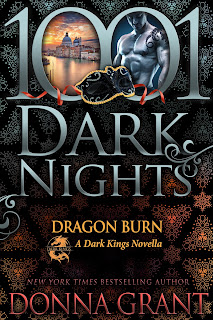 In this scorching Dark Kings novella, New York Times bestselling author Donna Grant brings together a determined Dragon King used to getting what he wants and an Ice Queen who thaws for no one.

A promise made eons ago sends Sebastian to Italy on the hunt to find an enemy. His quarry proves difficult to locate, but there is someone who can point him in the right direction – a woman as frigid as the north. Using every seductive skill he’s acquired over his immortal life, his seduction begins. Until he discovers that the passion he stirs within her makes him burn for more…

Gianna Santini has one love in her life – work. A disastrous failed marriage was evidence enough to realize she was better off on her own. That is until a handsome Scot strolled into her life and literally swept her off her feet. She is unprepared for the blazing passion between them or the truth he exposes. But as her world begins to unravel, she realizes the only one she can depend on is the very one destroying everything – a Dragon King.

I don't read too many novellas because they're often way too short, but I've read several from the 1,001 Dark Nights collections, and I've enjoyed all of them. The idea behind 1,001 Dark Nights is fantastic and I'm sure all of the novellas that have been published so far have been excellent. Dragon Burn is no exception! I adored Sebastian and Gianna's story.

Sebastian, a powerful Dragon King, is in Venice to find information about a man who might be framing Ulrik (Sebastian's friend and fellow Dragon King) for terrible deeds. Ulrik hasn't been found in a long time, and the man in Venice is as mysterious as they come. Sebastian is fairly certain he has located the man, and he is going to get close to the man's personal assistant to find out. But seducing Gianna backfires when Sebastian realizes that he doesn't want to use her - he simply wants her, no matter his reasons for being in Venice. When his search puts her life in danger, Sebastian must choose what is more important to him - justice for Ulrik, or the fiery woman who is definitely his Ice Queen. But what if he can have both?

I'm kind of a sucker for paranormal/fantasy romance novels involving a non-human male and a human female. It's not quite the same for me when the roles are reversed, for some reason. I love the dynamic that the non-human male/human female trope has on a story. And it works so well, in Dragon Burn. Sebastian is a powerful immortal Dragon King, thrown off his game by a mortal human he set out to seduce. Gianna is a tough workaholic whose ex-husband described as boring. The two of them fit together so well.

Sebastian has to make some top ten book boyfriend lists. He is so dreamy! He's Scottish and he's a sweetheart with nice manners. Did I mention how much I love powerful non-human males in paranormal romance? Especially an alpha? Sebastian is a Dragon King, and he has been around for a while. He is clever and smart, charming and lethal. Did I also mention powerful and sexy? While I loved the length of this novella, I feel like there should be a full-length novel for Sebastian (and Gianna). I wouldn't mind seeing more of his story!

Gianna is perfect for Sebastian (just like he is perfect for her). She is a hard worker and a loyal woman. Not once was she ever afraid of Sebastian, even when she found out what he was. She trusted her instincts and followed her heart, but she also used her brain and didn't jump to conclusions or run before hearing explanations. Smart girl. I liked her a lot!

The two of them together are straight fire. Grant cooks up such great chemistry. Gianna may think of herself as a cold workaholic, but being with Sebastian proves that she is just as passionate as he is. I loved watching them ignite. But it's not just lust and sexy times - they fall for each other with each passing page. It's adorable, really. He tries not to care for her because he doesn't want her involved. But their feelings couldn't be stopped!

Also worth mentioning - I've not read any of the books in this series, nor have I read any of Grant's other books. I was confused when "Ice Queen" was brought up. I thought Gianna was also a non-human, but she isn't. From what I understand, "Ice Queen" is the Dragon King's chosen mate, and Sebastian calls her that time after time. But she is human!

This novella didn't feel too short like most novellas do, which I appreciated. There is a lot of swoony and sexy romance, but there is plenty of action too. This book involves a lot of dragons, fae, and even a Druid. It's an exciting story, right up until the end. The ending itself is lovely.

While this novella was a great length, of course I wouldn't have minded more! More sexy times too. But alas, therein lies the rub - this is a novella! Again, this novella didn't feel rushed or too short. But I would have loved more!

Any fan of Donna Grant should read this novella - it is definitely worth it. I often think that novellas are a waste of time because they are so short and might not add much to the series - but this novella is a standalone story and it is so fantastic. Adult PNR fans, this novella is wonderful! I might go as far as to recommend the series in general, but this is the only story of the series that I've read. But I may check them out! At the very least, the other two 1,001 Dark Nights novellas Grant has written.

4.5 stars. I loved Sebastian and Gianna's story, and I definitely want more! I'm going to check out the series. Maybe future books, in hopes of catching a glimpse of Sebastian/Gianna cameos. It would be nice! 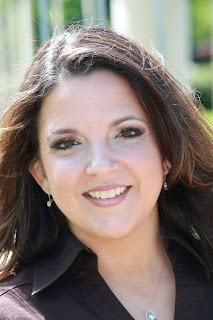 Despite deadlines and voracious reading, Donna still manages to keep up with her two children, four cats, and one long haired Chihuahua.

She lifted her hand from the water, raising her arm to watch the droplets run down her limb. “I wish I could stop time.”

“I know,” he murmured and kissed the side of her face. “I do as well.”

“The day flew past. And why do I feel like everything is ending?”

Because it was, though he wouldn’t tell her that. “It’s no’ over yet.”

She reached back and wrapped her arms around him, a moan rumbling in her chest. “My body is no longer mine. You’ve touched every inch. I can feel you on my skin and deep inside me.”

He brought her arms down before running his hand along her arm and intertwining their fingers. His mouth moved to her ear where he whispered, “I can still feel your fire.”

“It’ll always be yours.”

They remained until the water began to cool. It was the only thing that drove them from their silence. Sebastian glanced out the window and saw the darkness. He knew before Gianna finished drying off that she was leaving.

His mind raced with ideas of how he could get her to stay. He started to reach for her, to kiss her and make love to her again, but it was only prolonging the inevitable. He had business he needed to take care of, and the farther away Gianna was from that, the better.

While she gathered her clothes in the trail they’d left, he grabbed a pair of jeans and a white tee. When he went downstairs barefoot, he found her sitting on the sofa putting on her shoes.

His boat had been returned last night, thanks to his careful planning and the huge amount of money he’d paid. He could drive her home, but Sebastian knew he wouldn’t leave her if he did. The best thing would be to let her go now. Though it was killing him.

She drew in a deep breath and released it as she came to her feet. “This is good-bye, isn’t it?”

Her eyes moved to look out the windows over the Grand Canal. “But you’ll return one day.”

“Sure,” he lied. He didn’t have the courage to give her the entire truth—that as long as she was alive, he’d never return to Venice.

Because if he did, he’d go to her.

He’d search until he found her—and then he’d never let her go again.