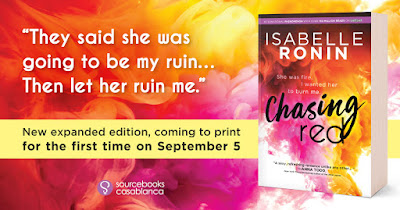 Calling all New Adult romance lovers! Today, I'm giving away a signed copy of Chasing Red by Isabelle Ronin. Fun, right? If you've not heard of this book before, check it out below. It is bound to be a good one!

THEY SAID SHE WAS GOING TO BE MY RUIN...

THEN LET HER RUIN ME.

He had everything—wealth, adoration, a brilliant future. Until one chance encounter changed everything.

The moment Caleb Lockhart spotted the mysterious woman in her siren red dress, he couldn’t tear his eyes away.

For the first time in his life, he wanted something. Something he knew he could never have.

The unforgettable stranger he dubs RED.

The beach was a good half-hour drive from Caleb’s place. We drove there with our windows open, the wind blowing my long hair. It was dark, the roads free of traffic.

I felt excited, energized, and at the same time Caleb’s hand in mine calmed my anxious mind.

He threw me a glance, his thumb stroking my palm.

I swallowed the lump in my throat. No one had said that to me before. I turned my gaze out the window so he wouldn’t see how much his words had affected me.

Tonight I was seeing a side of Caleb I hadn’t encountered before. I didn’t know what to think of it, or maybe I did but refused to think about it.

All I knew was that I liked this boy as I had never liked anyone before.

He parked his car in front of the lakeside shops that had already closed for the night. We took off our shoes, then walked on the beach, the white sand cool as our feet dug into it.

The wind was a little chilly, and I wrapped my arms around my middle to ward off the cold. Out of the corner of my eye, I saw Caleb shrug out of his jacket.

“Here,” he said, placing it on my shoulders.

But he was the one who warmed me up inside as his hand reached for mine again, pulling me close to his side as we walked.

“I knew you were avoiding me,” he began after a moment. His voice held no resentment, only understanding. That surprised me. “I knew you didn’t want anything to do with me the past few weeks, but I thought about you. Actually,” he corrected, his voice deepening. “I think I’m a little obsessed.”

He sighed when I didn’t respond as quickly as he may have expected. “I’m sorry if I made you feel like I was forcing you to do something you didn’t like.”

I walked beside him for a moment, listening to the sound of the waves before I answered. “I’m sorry I said that. It’s not that, really… You confuse me, Caleb.”

I knew he was waiting for me to say something more, to explain, but the words were stuck in my throat.

He was more observant than I’d given him credit for. Because he was right, I realized. I had been sad for a long, long time. I had been starved for love and affection for so long that I’d forgotten what it felt like. I had refused to let anyone in, afraid to be hurt again. But this boy holding my hand was stripping me of my armor bit by bit.

“All I could think about was how to make you smile again. Not the fake ones you give to people to be polite. I want your real smile, where your eyes light up and your lips stretch up to your ears.”

My ears were ringing. What was he trying to say?

He stopped suddenly, and I had to turn around to face him.

“Don’t you?” he asked solemnly, directly.

His eyes were burning with emotion. I looked away.

Who was this boy? This intense, serious boy who looked at me as if he could see my soul.

He nodded. “That’s okay. I’ve been waiting for you to come along for a long time now. I think I can wait some more.”

“Don’t you think this is too fast?”

“The thing is, I’ve made up my mind. And my mind says it’s you. If I’d just met you today, I would still want you today, tomorrow, five days from now…” His voice trailed off, and I was scared he was going to say forever or some ridiculous thing like that.

I didn’t believe in forever. Forever was for people who believed in fairy tales. And I never had.

He let out a quiet laugh. “I know. You just have to endure it.” He paused. “After all, how could you give up a handsome boy like me?”

And the usual Caleb was back.

“But you have to promise me something,” I said.

He did that thing again where he angled his head and studied me. I squirmed.

I swallowed a chunk of cowardice that was lodged in my throat. Of course, he was right. How could he know what I was feeling before I realized it myself?

“Why promise something when I’d fail miserably?”

“Will you try at least?” I persisted.

He looked to the water, sighed, and looked at me.

I held my breath as my heart knocked wildly against my chest.

Suddenly he sat on the sand, resting his back on a broken tree trunk and tugging me down with him.

I had about two seconds before he was pulling me toward him, my back against his chest, my legs encased between his. I was drowning in Caleb.

“Just relax. I won’t kiss you tonight if you really don’t want me to.”

Suddenly, I wanted him to kiss me again.

What was wrong with me? When he was offering it, I didn’t want it, but now faced with the possibility that he wouldn’t kiss me tonight, I suddenly yearned for it.

I rested my cheek on his shoulder, inhaling his scent. He stiffened.

“Don’t do that if you don’t want to be kissed tonight. I only have so much control before I—” He cut himself off before he could finish.

“Before you what?” I could hear the smile in my voice. Even to my ears, I sounded…happy.

His eyes narrowed. “Are you deliberately provoking me?”

His expression turned serious as he cupped my face with his hands and forced me to look at him.

“What do you want, Red?” he whispered, his voice husky.

I opened my mouth, but nothing came out. Hadn’t he figured out that I’d changed my mind and wanted him to kiss me? Was I not throwing him enough signals?

“Say it, or I won’t do it,” he declared, his eyes mesmerizing me into surrender.

I didn’t have to say it twice. His mouth claimed my lips. Gone were the butterfly kisses; gone were the teasing and coaxing. This was a branding. One of his hands was on my back, pushing me against him, while the other plunged into my hair, cupping my head so that he could control the kiss.

I own you, his kiss said. We kissed for a long, long time.