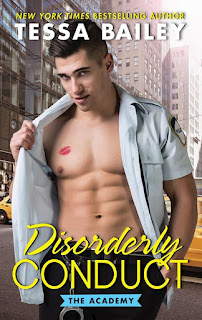 Police academy cadet Charlie Burns can’t believe his luck when the gorgeous blonde he meets in a bar murmurs those magic words: “Nothing serious, ’kay?” Mind-blowing, no-strings sex with Ever Carmichael—it’s the holy grail of hookups for a guy who’s too busy following in his law enforcement family’s footsteps to think about getting serious. Charlie’s all about casual…that is, until Ever calls it quits and his world tilts on its axis.

Ever knows that when you control the relationship game, you can’t get played. But for the first time, she wants more than short-term satisfaction. Step one: end her fling with commitment-phobic Charlie. Step two: sacrifice herself to the ruthless NYC dating scene. Yet everywhere she turns, there’s Charlie, being his ridiculously charming self. No online match or blind date compares to the criminally hot cop-in-training, but they’re over. Aren’t they?

If love is a four-letter-word, why does the idea of Ever seeing someone else tie Charlie up in knots?  Now he’s desperate to win her back…and a little date sabotage never hurt anyone, right?

I love Tessa Bailey and her books - very few have been misses, and I've read nearly all of her books. I've been very excited about this new series, not only because the publisher is one of my favorite adult romance publishers, but because it sounds like a great series. I love men in uniform, and as romance heroes, they are totally my type. Most are alpha types who love to give orders. Charlie Burns is no exception, and I loved that part of his personality. This type of romance isn't my usual, but I didn't dislike it (like I thought I would). I had some issues with Charlie's behavior to get Ever to be with him, and I'll talk about those issues and how they caused the drop in rating. But overall, I liked this book a lot more than I thought I would, which is a win!

Charlie Burns and Ever Carmichael met in a bar one evening, and it was lust at first sight. Ever is only looking to hook up temporarily (for one month maximum), and only with "unavailable" guys. Guys like Charlie, who are single but completely married to their job. Charlie Burns doesn't do relationships, not while he is in the police academy, training to become lieutenant and sergeant and follow in his brother's, father's, grandfather's, and great-grandfather's footsteps. So when he and Ever meet, it is perfect. They see each other every day, sometimes more than once, to have sweaty, hot, fantastic sex. But one month ends, and so does their fling, when Ever tells Charlie that she can't do it anymore. Ever wants to date for real, and she doesn't think Charlie wants real. But when they part, Charlie begins to realize that he wants Ever, all of Ever, and he wants real with her. What follows is the story of a man who is desperate to make a woman realize that he is good for her, and she is good for him.

Like I said, this isn't my usual kind of romance. I don't mind the whole lovers-to-more kind of thing, in which they go from casual hook-up to relationship status. But this romance isn't like that - it goes from lovers to nothing to friends to lovers to relationship status. Which, realistically, is not my thing. I always hate the types of romance that involve "getting someone back" for the majority of the book. At the climax/towards the end of the book? I don't mind. But for the entire book (like second-chance romances)? No thanks. This romance wasn't a second-chance romance, but it wasn't a lovers-to-more type of romance. Still, I was surprised when I found that I actually really liked this kind of nonlinear romance. I liked seeing Charlie get a kick in the pants when Ever gives him the book (see what I did there?). I liked seeing Ever feel so guilty and upset about giving him the boot, because she loved him but didn't think he wanted "more" from her. I liked that both of them suffered during their "break-up", and not just Charlie. Although, it was Charlie who was trying to win over Ever, and not the other way around.

The other thing about the romance that I thought would have pissed me off was the fact that Ever was trying to go on dates and put herself out there, even when she knew she was in love with Charlie. This would usually make me irritated and hate the book. BUT. I actually didn't mind this plot very much, mostly because Ever never goes on real dates (they are all interrupted or terrible), and she never even tries to form a connection with her "dates", because she is always thinking of Charlie. Seriously, none of them even kissed her or touched her. So it wasn't so bad for me! Things definitely could have been worse.

I wasn't sure if I liked Ever, at first. Her whole "mistress rules" thing is the stupidest garbage I've seen in a long time. Basically, she hooks up with a guy for a month, and then moves on to the next. Always the "mistress", being with an unavailable/forbidden guy. In her case, guys who are more preoccupied with the job. In her mother's case, married men. Ever has lived by the mistress rules her entire life, because her mom drilled it into her head that men are unreliable and should never be trusted. (Yeah. Okay.)

But as the story went on, I definitely understood Ever better, and I liked her. I still hated the mistress rules thing, but I felt like I knew where Ever was coming from. She is lonely and miserable without Charlie, and she doesn't enjoy any of her dates. She wants more, but doesn't know how to form those emotional connections. And as Charlie makes more of an effort to be her friend and get to know her, she realizes that she has loved him all along, and she wants him. Ever's character development was very well-written; she goes from someone who likes what she has but wants to change, to someone that changes and knows what she wants better than she has for her entire life.

Charlie, oh Charlie. I loved him overall, though there were times when I couldn't believe what he was doing. He is confident, a little arrogant, oh-so charming, noble, and selfless when it comes to Ever. He is also selfish when it comes to her. He has a good heart and a lot of patience. I have to hand it to him, he never stops trying to win Ever's affections, even when she shoots him down time after time.

Both characters think the other isn't looking for anything serious (which was their plan, upfront), so when both of them start to have thoughts to want something more permanent, they are sure that the other wouldn't want that. Which is sometimes frustrating, but very understandable. It was nice to see Ever and Charlie make the effort to try to be friends, even when they crossed the friends line several times. It made it obvious that they never tried to get to know each other during their month-long hookup, which they both ended up regretting.

So I ended up liking the romance a lot. I was cheering for Charlie but I was also pulling for Ever, for her to wake up and realize that she didn't need the mistress rules, and that she was pushing away Charlie for all of the wrong reasons.

Worth mentioning is how hot this book is. Tessa Bailey's books usually are, but phew! Alpha male + girl who likes it a little rough = super sexy romance. Especially since this book starts with Ever and Charlie meeting and doing their sex-only hookups.

Props to Bailey for including so many great friendships in this book. Ever and her best friend Nina are such great friends, so supportive of each other. Charlie has two great friends who are also his roommates - Jack and Danika. Jack and Danika are like brother and sister, and all three of them are good buddies at the academy. It's good to see so many friendships, on both sides (Charlie and Ever).

What made me drop my rating from four (or five) stars to three stars was some of Charlie's behaviors and actions, when he was trying to win her over. She had dates lined up, and he would literally sabotage her dates. He pulled the fir alarm in a fancy restaurant where Ever and her date were having dinner. He paid his fellow academy friends to crash the speed-dating event that Ever was attending, so that she would get frustrated with their weirdness and leave. Charlie did a lot of things that seemed sketchy and borderline stalker-y. Yes, we as readers are rooting for him and hoping things work in his favor. On the one hand, all of his crazies might seem sweet (he's trying to win over his lady!). But on the other hand, it's a little creepy and overbearing. Ever had every right to go on dates, regardless of how she felt about Charlie, and regardless of how Charlie felt about her. While I do think that Charlie and Ever are a wonderful pair, I don't condone some of his behaviors.


I do recommend this book because it is a great romance, but I also hesitate to recommend it because of Charlie's stalker-y actions to interrupt Ever's dates. I think readers could definitely look past his actions since (1) this is fiction and (2) we know what Charlie is thinking (i.e. he isn't a criminal or a perv or a "bad guy"). Charlie is the type of guy that you instinctively root for, and I definitely was. I liked him a lot, but would have loved him (and the book) more if he hadn't been so active in trying to ruin Ever's dates. I mean, come on. That's weird. And not really okay.

Also, even though Ever and Charlie are 23 years old, this is definitely an adult novel. I mean, I suppose that age would be adult no matter what. But just to be clear, this isn't a New Adult novel. Not to say that New Adult readers wouldn't enjoy this book! But it's 100% adult, rated R, etc.


3 stars. Without the weird stalker-y stuff, this probably would have been a five-star novel for me. I liked it a lot more than I thought I would. But I have hopes for the rest of the series! I have Indecent Exposure (Jack's book) queued up and I can't wait to start it. Greer's will be fun too, I'm sure!