Review: Black Bird of the Gallows by Meg Kassel 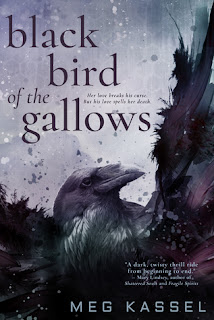 A simple but forgotten truth: Where harbingers of death appear, the morgues will soon be full.

Angie Dovage can tell there’s more to Reece Fernandez than just the tall, brooding athlete who has her classmates swooning, but she can’t imagine his presence signals a tragedy that will devastate her small town. When something supernatural tries to attack her, Angie is thrown into a battle between good and evil she never saw coming. Right in the center of it is Reece—and he’s not human.

What's more, she knows something most don't. That the secrets her town holds could kill them all. But that’s only half as dangerous as falling in love with a harbinger of death.

I'd been looking forward to reading this book for quite some time, ever since a description was released. It has been a high-priority read for me, and a high-priority publication for Entangled. I had hoped that my expectations were not too high and I wouldn't be disappointed. I had nothing to worry about. This stunning debut is dark, imaginative, and enthralling, worth every bit of attention and hype it has received.

In this story, Angie Dovage's world is turned to chaos, and it starts with crows. It has been years since anyone bought the neighboring house, but one day, a family moves in. Angie's new neighbors are a little strange, especially the teenage boy who is in many of her classes. What's even stranger is the arrival of many crows - and bees. There is more to Reece Fernandez, there is more to the crows who follow him - and Angie - and there is more to the bees. Angie finds herself in the midst of a supernatural war between the cursed Beekeeper and the harbingers of death. The town of Cadence is marked, and there can only be one outcome: death.

From the start, I was hooked and I couldn't stop reading. There was no chance of me putting down the book until I finished. Kassel's writing and the flow of the story made it easy to get sucked into the story and lose track of time. I was never bored, so there was no worry about DNFing.

I was a little surprised when I connected with Angie almost right away! She is a bit of a social outcast in her high school, due to something in her past surrounding her mother. But she is very gifted with music, and is a DJ at a club on weekends. She is smart and talented and a hard worker. She is also so strong and resilient, especially with everything she went through with her mother.

I liked how that was revealed incrementally (what happened with Angie's mother). The first time you realize something is different about Angie's parental life, it's just this one phrase, a few words. The author slowly reveals parts of Angie's past. I love how the author ties it all together by the end.

Reece is the male protagonist and I absolutely adored him. He is more than a swoony love interest (though he definitely is that). He's sweet and thoughtful, and occasionally he has broody moments, and protective moments, and a whole bunch of selfless moments. Reece is by no means a perfect guy, but he is very smart and full of worldly knowledge, so he understands certain things better than most. I liked him a lot and I thought he was a great character opposite Angie.

There were many lovely secondary characters worth mentioning. Angie's dad is such a cool guy; he is fairly well-off, after a lot of hard work. He loves Angie so much and has a great relationship with her. He's a single dad, but he is really slaying the parenting thing. Here is an excellent example of a healthy parent-child relationship in YA lit - he is there, in his kid's life, and he isn't oblivious or always working.

And then there are Angie's friends, Deno and Lacy. They are wonderful friends, so supportive and loyal. I also love that they each have a thing for each other - such a cute slow-burn almost-romance happening there. But mostly I was happy to see a great friendship between the three of them.

Reece's family isn't as present as the other characters (and with good reason), but they are a wonderful family as well. I especially liked Reece's mom and really wished something could have happened between Reece's mom and Angie's dad!

I loooooved the romance between Reece and Angie. They meet and the attraction begins, but it takes more than that for them to fall for each other. The interest is there, but the feelings start to build as the story goes. Kassel packs this book with plenty of Reece/Angie interactions, and there are a number of yummy swoons too. The romance progressed at a good pace, not too insta-love-y but not too slow either. I loved watching these two interact!

The story is very action-packed and fast-paced, though not in an overwhelming way. The beginning of the book is more focused on Angie trying to figure out what is going on with the crows, the bees, Reece, and this creepy guy (who is revealed to be the villain). Then, when things are revealed to her, the real danger begins. The creepy buy - the Beekeeper - is intent on hurting Reece, and he'll go through Angie to do so. The "why's" and the "how's" are explained!

The ending is very exciting and it wraps up well. There is a HEA. I believe this book is a standalone and I'm all for it - the story ends in a great place. But I also wouldn't hate seeing another book to follow, though it would be cool for this book to remain as it is. I loved the story and will probably being saying this a lot in the future!

There isn't anything specific that I didn't like. However, I would have loved to understand a little better what happened to Angie at the very end, in terms of this one thing. I didn't have a great grasp of this one aspect - the story went from one chapter to the next, one scene to the next. I can't say more without being specific and spoilery but there is something about the ending that could have used a little more explanation.

Also, I wouldn't have minded more from Reece and Angie in terms of their relationship! They were incredibly cute and lovely together.

Fans of YA paranormal romance, this is a book for you! I love this kind of story. I love this kind of romance. I would definitely reread this again and I highly recommend it. It is appropriate for younger teens and up, as it is low on "inappropriate" language, sex, and violence. Well, there is violence, but it isn't too graphic or gruesome. In any case, this book would be a great addition to any YA reader's shelf!

4.5 stars. My default is to round down but this is most likely going to end up on at least 2017 favorites list of mine, regardless of the rating. I'll be looking out for more by this author for sure. This book is a one-of-a-kind debut that should be on everyone's radars!