Review: In Some Other Life by Jessica Brody 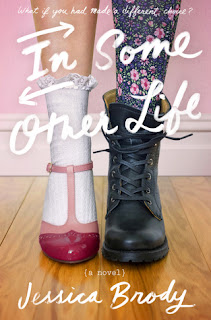 Kennedy Rhodes turns down an acceptance to an elite private school, instead choosing to stay at her high school and jump at the opportunity to date the boy of her dreams. Three years later, Kennedy walks in on that same boyfriend cheating with her best friend—and wishes she had made a different choice. But when Kennedy hits her head and wakes up in the version of her life where she chose to attend the private school, she finds that maybe it’s not as perfect of a world as she once thought.

I've read a number of Jessica Brody's books, including 52 Reasons to Hate My Father and A Week of Mondays. I especially loved 52 Reasons to Hate My Father, and I enjoyed A Week of Mondays. In Some Other Life is just as creative and sweetly romantic as her previous books, but something felt lacking in the story. The book felt all over the place, and not just in terms of the parallel universe jump.

Kennedy Rhodes is a model student at her high school. She is the editor-in-chief of the Southwest Star, a newspaper that she started up at the high school. She always dreamed of going to The Windsor Academy, an elite private school that churns out amazing students that go to Ivy League schools. But her life at the public high school is great. That is, until she walks in on her boyfriend and her best friend kissing... and it doesn't look like it is the first occurrence. When Kennedy falls and hits her head, she wakes up and finds herself in another life, in which she accepted her invite to attend Windsor, and she is now one of the elite students she always dreamed of being. But she quickly discovers that life as a Windsor isn't what she thought it would be, and her life in this parallel universe isn't perfect and happy.

I was nervous about this book because it clearly involves cheating and I hate cheating in a book. The cheating wasn't handled particularly well, in my opinion, and I'll talk about that later. Most of the story around the cheating was okay though. I was not in danger of abandoning the book, and I got really into the story once Kennedy entered the parallel universe.

I liked Kennedy immediately because I was so like her in high school and in college. She is top of her class, a hard worker, a workaholic, in charge of everything, never stopping. She's the girl that does it all, even at the expense of personal relationships. Not that her best friend and her boyfriend hooking up behind her back is excused. That is definitely not Kennedy's fault.

The idea of this book is pretty cool. At first you think it's simply Kennedy hitting her head and waking up in another world. But the author uses physics to explain this occurrence. You see, Kennedy's little brother has a fascination with physics, and while all of the physics talk confuses Kennedy, she remembers him talking about parallel universes. Her life at The Windsor Academy definitely happens in another universe, according to physical theory.

It's so interesting to see Kennedy's two different lives compared to each other. She thinks she has everything she ever wanted when she wakes up and realizes that she is an actual student at Windsor, but she realizes that very little is the same. Her mom is more stressed, her dad doesn't even live at home anymore, her best friend at Windsor might not even be a real friend, and "Other Kennedy" isn't as perfect as Kennedy in her "real" life.

I liked the love interest in the other life, Dylan Parker. He is funny and confident and he loves to antagonize Kennedy. He isn't a preppy student, despite attending a very elite preppy school. He and Kennedy have a lot more chemistry than she and Austin ever did. Although she and Austin were pretty much no longer in a relationship, from the start of the book.

I loved that Kennedy's parents have such a sweet relationship and they are so supportive and normal. I feel like YA parents are either not present or they are crazy. Kennedy's mom and dad are very cool, in the "real" life. In the parallel universe, they are probably going in the direction of divorce. But in Kennedy's real life, they are a wonderful example of married parents with teenagers.

The ending is a happily-ever-after and wraps up well, though it is a little open-ended in terms of one aspect. I wanted that aspect to be expounded upon so I'm kind of hoping that the author writes some sort of epilogue. No sequel, but a few pages of an epilogue would be lovely.

I really hated the cheating part of this story. Austin and Laney, Kennedy's boyfriend of three years and best friend of... forever, are quite possibly the worst people in this book, in any universe. I can get behind the fact that they fall in love. I CANNOT get behind the fact that they sneaked around and hooked up many times for over three months, while Kennedy and Austin were still a couple. Three months! And who knows how far they took things? This bothers me so much! To me, there is never a good excuse for cheating. If Austin was so bored of his relationship with Kennedy, or if he was so in love with Laney, why did he not break things off with Kennedy? If Laney is such a good friend like she is noted to be, how could she betray her best friend like that?

I hated that, in the end, Kennedy forgives Austin and Laney like nothing. It is something that she does like flipping a light switch. Look, guys. I don't care if Austin and Laney were meant to be together like it was fate or destiny or whatever. I don't think they felt guilty enough or suffered enough. Yes I realize that people should practice forgiveness. But I also think that people should acknowledge that they did something wrong and pay the price. Kennedy's forgiveness seemed way too sudden and too easy.

And then of course Kennedy and her romance (with Dylan) is in the other universe. Think on that.

I think I would have LOVED this book if the Austin/Laney thing had not happened. Maybe the author could have done some other catastrophe, like Kennedy getting booted as editor-in-chief, or the newspaper getting cut, or something with her parents. I don't know. The cheating thing was handled so poorly.

While I didn't hate this book, I also didn't love it, and I can't say I'd recommend it. Brody's A Week of Mondays kind of deals with a similar concept (in that book, the protagonist wakes up every day and it's still the same Monday, so she is living that same Monday over and over.). I liked that book. This would have been terrific had it not had the cheating part of the story.

2.5 stars -> rounded up to 3 stars. I'll still be looking forward to reading more books by this author, because my experiences with her YA contemporary novels have been good overall. But here was one bad apple and I didn't totally enjoy the book. It's not a terrible book overall but not really for me.