Review: Lady Claire Is All That by Maya Rodale 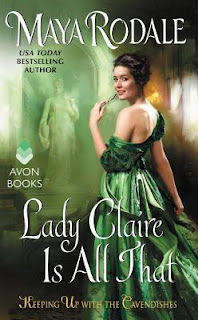 Lady Claire Is All That by Maya Rodale
Book Three of the Keeping Up with the Cavendishes series
Publisher: Avon
Publication Date: December 27, 2016
Rating: 4 stars
Source: eARC from Edelweiss

Claire Cavendish is in search of a duke, but not for the usual reasons. The man she seeks is a mathematician; the man she unwittingly finds is Lord Fox: dynamic, athletic, and as bored by the equations Claire adores as she is by the social whirl upon which he thrives. As attractive as Fox is, he’s of no use to Claire . . . or is he?

Fox’s male pride has been bruised ever since his fiancée jilted him. One way to recover: win a bet that he can transform Lady Claire, Society’s roughest diamond, into its most prized jewel. But Claire has other ideas—shockingly steamy ones . . .

By Claire’s calculations, Fox is the perfect man to satisfy her sensual curiosity. In Fox’s estimation, Claire is the perfect woman to prove his mastery of the ton. But the one thing neither of them counted on is love . . .

What a delightful addition to a wonderful series! I adore Maya Rodale's books, and this series has been so fun to read so far. In addition to the first three books in this Cavendishes series, I've read several books in her Bad Boys & Wallflowers series. A thing I did not realize - this Cavendishes series is like a crossover/continuation of the Bad Boys & Wallflowers series! Ashbrooke and Emma make an appearance in this book. I didn't realize that the Ashbrooke of this series was the same Ashbrooke in The Wicked Wallflower (which I adored). How fun!

This book follows Lady Claire, the eldest Cavendish sister. She's the bluestocking, the glass-wearing, drab-dressing, math-talking American sibling, the one who brings up mathematics and equations to bore potential suitors to tears. Lady Claire wants to meet the Duke of Ashbrooke (newly married) to discuss his inventions and theories. And the person to introduce her? Lord Fox, who has taken an unusual interest in her. Except that it's not unusual for Lord Fox. He's made a secret with a friend, who doesn't like how Fox wins at everything. Turn Lady Claire into a dazzling debutante, or Fox has to give up his prized hunting hound. Fox isn't an intellectual, but he's charming, handsome, competitive, and a notorious rake. On paper, the two are complete opposites. But when they collide?

I loved Lady Bridget's Diary, and liked Chasing Lady Amelia (though not nearly as much as book one), so I was really pleased when I really enjoyed this book. It's definitely my second favorite of the series. And we can talk about the cover? I love the metallic green!

From the start, I really liked Claire. She's so intelligent and clever, and she uses her intelligence to keep suitors away. She wants to write a scientific paper on certain mathematical subjects, but fears putting her name on the paper. She's blunt and logical, and loves to solve equations and puzzles. Claire is all of us intelligent women!

Fox is the complete opposite. He's charming and dashing, rakish and mischievous, and almost carefree in attitude, though he has his own drive and focus. He's not book-smart like Claire, but he is intelligent in his own way. He's very athletic and loves all manner of physical activity and sport. He's also very competitive and likes to win. He is a fighter, and he likes to get his way.

I liked Claire, and rooted for her throughout the story. I adored Fox, and was cheering him on as well, despite the silly and idiotic wager that he made. He made it shortly after his fiancee left him to elope with a lowly actor, so we can forgive him, especially after how he fights for Claire, after she finds out. But I really like how Claire fights for the relationship as well. The ball was solely in her court, and I love how she declares her feelings to Fox and the rest of society.

The romance is swoony and steamy! You might be surprised by how steamy things get between Fox and Claire, despite Claire being a nerdy lady. Fox, on the other hand, is known to sex incarnate, so the two as a pair is pretty fiery. Rodale saves all the sex (which was one scene) for the very end, but the tension is really intense in the book.

I love the humor and light tone in all of Rodale's books! This book was no exception. I laughed, I giggled, I rolled my eyes at some of the silliness of the Cavendish siblings. Rodale has a very distinct voice in historical romance, and I really enjoy reading her books because of this.

Overall, I was really happy with this book. The series has yet to really disappoint me, and I'm hoping book four, James's book, won't!

More Fox and Claire steamy times, thanks. Yes, this book was plenty steamy, but I thought it could use a liiittle more intimacy. You know what I mean. *insert suggestive meme here*

I highly recommend this book, this series, and pretty much anything Rodale has written. She's an auto-buy author for me, right behind Elizabeth Hoyt, Tessa Dare, Caroline Linden, and Katharine Ashe. Rodale's books are sweet, funny, steamy, and so enjoyable! I couldn't read this book fast enough.

4.5 stars -> rounded down to 4 stars (remember, I'm picky with 5 stars). I am so excited to read James's book! I'd be interested in reading a book featuring Lady Francesca too. Rodale redeemed her, in this book!