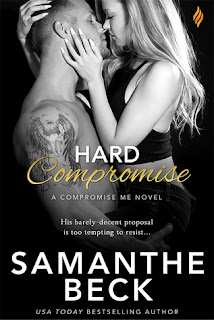 
Laurie Peterson assumes her impulsive one-night stand with sinfully sexy Sheriff Ethan Booker is the biggest surprise of the year…until her bakery burns down while she’s basking in the afterglow. It looks like her dreams are up in smoke, but then Ethan proposes a deal too tempting to resist.

Ethan has no intention of settling for a one-night stand with Laurie. Nor does he want anything to do with the women his wealthy family wants him to meet. Not when he’s waited ten years for his chance to make his move. His deal might have strings—and Laurie may not know the stakes—but nothing will stop this sexy cop from staking a real claim on her body and her heart.

Okay. I was not disappointed, folks. Brazen's recent novels have been rather lackluster, but I had high hopes for this novel. Samanthe Beck's books are so swoony, sexy, steamy, and sweet, and this one was no exception. I adore her books, and this series especially!

Ethan Booker has waited ten years for a chance to be with wild Laurie Peterson, and he isn't letting the chance go to waste. Sure, he comes from a rich family and she comes from a much more "disgraceful" background. But he knows what - who - he wants, and it's Laurie. Laurie is an impulsive commitment-phobe, and she wants Ethan as badly as he wants her. But she knows she's not good enough for him, especially with their different backgrounds. But Ethan isn't a guy to back down, and his deal that he offers her is temporary at first, but hopefully for life.

You'd think I wouldn't enjoy this book, because Laurie, on paper, is not the type of heroine that I like. She's wild and impulsive, slightly irrational and a total commitment-phobe. She avoids commitments like they are rashes, so she has a lot of hook-ups but no real relationships. She is hot and cold with Ethan Booker, pushing and pulling, throwing herself at him and then running away. Theoretically, *I* shouldn't like her.

But I did. I understood her. Sure, she has a lengthy sexual history, a ridiculous outlook on commitment, and more in common with her tramp mother than she wants to admit. But Laurie is also a hard worker, a tough lady, and someone who doesn't like to ask for help. I felt for her, even if I wanted to push her at Ethan and make her stay there.

Ethan... woah. Holy alpha male. He's an alpha male but not a crazy overprotective one. He's sweet and genuine and alpha all at once - it's hard to describe. This is something that I love about Beck's heroes - they're sexy alphas, but they're also sweet, considerate, and decidedly more real than most alpha males in romance novels. Like, I could see Ethan being an actual guy in real life, and not because he's a hot sheriff.

Ethan is a sweetheart as much as he is a sexy guy. I like how he is patient with Laurie, but he's also firm and goes after what he wants. He waits for her, but then he also goes in for what he wants. It's a good balance of letting Laurie be but also satisfying them both. Ethan looks out for Laurie and wants the best for her, but he doesn't try to solve all of her problems.

Have I mentioned how hot the chemistry between these two is? The romance in the book is well-developed and meaningful, but the chemistry, the chemistry is scorching hot. These two have been waiting to paw at each other for ten years (you'll have to read the book to find out why), and when it happens... *fans self* Samanthe Beck always has steamy romance novels, but this one is really really hot. I'm impressed!

The pair strike a deal, in which Ethan will loan her money (her bakery burned down) if she attends his sister's wedding as his date, to keep his mother off his back. I wasn't expecting to like Ethan's mother, but I actually did! She's not overbearing and nosy like I would have expected. I like how Ethan's mother takes to Laurie and really likes her, despite Laurie thinking that she isn't good enough for Ethan. Ethan's mother is a smart lady and one of the reasons why Laurie fights for Ethan.

Which brings me to the climax and end of the story! I despise it when the female screws up and for some reason, it's the male that has to beg and grovel. In this book, Laurie is the one that pushes Ethan away, and he walks away, telling her that she needs to decide even though he'll always love her. The best part about the ending is that Laurie picks herself up and goes to Ethan - and not the opposite. Ethan leaves the ball firmly in her court, and Laurie isn't stupid; she goes after him. I LOVE THIS.

Overall, this is a really great addition to the Compromise Me series, and an awesome book by Samanthe Beck! It pulls me out of the small Brazen funk that I've been in.


Nothing specific from me!

I recommend this one! I feel like it's been a while since I solidly recommended a new Brazen novel - even my regulars Katee Robert and Tessa Bailey have let me down recently. Samanthe Beck hasn't though! I'm excited that this one was really solid.


4.5 stars -> rounded down to 4 stars. I hope the next book follows Rafe's sister Arden! (Rafe is the hero of Compromising Her Position, the equally sexy and enjoyable predecessor of this book.)