Review: My Rogue, My Ruin by Amalie Howard & Angie Morgan 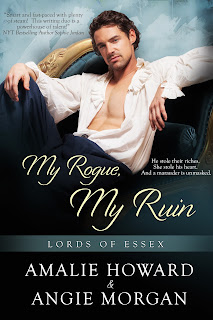 The Marquess of Hawksfield’s lineage is impeccable and his title coveted, but Archer Croft is as far from his indulgent peers as he can get. His loathing for the beau monde has driven him to don a secret identity and risk everything in order to steal their riches and distribute them to the less fortunate.

Lady Briannon Findlay embraces her encounter with the Masked Marauder, a gentleman thief waylaying carriages from London to Essex. The marauder has stirred Brynn’s craving for adventure, and she discovers an attraction deeper than the charming thief’s mask.

Brynn is a revelation, matching Archer in intelligence, wit, and passion. Stubborn and sensuous in equal measure, she astonishes him at every turn, but when someone sinister impersonates Archer’s secret personality, and a murder is committed, Archer begins to think he doesn’t stand a fighting chance without her.

An okay first attempt at historical romance, but not great and definitely not a new favorite. This book came highly recommended to me, and I was looking forward to reading it. I think I had more issues with this book than things that I liked, but I am still giving this book a somewhat favorable rating. I know these two authors are experienced Young Adult writers, so I expect them to grow in their historical romance writing.

Archer, the Marquess of Hawksfield, is a lord by day, and Robin Hood by night. He's not actually Robin Hood, but he has been masquerading as a charming bandit, robbing rich lords and ladies and giving the money from the jewels to orphanages and homeless people. One night, Lady Briannon and her family are robbed by the Masked Marauder, and everything changes. She has an attraction for this charming bandit, but she also finds herself drawn to the surly and cold Lord Archer. She'll soon discover that they are one and the same. But when an impostor is masquerading as the Masked Marauder, and disaster strikes in Archer's family, Archer and Briannon will have to make choices that they may not want to face.

Briannon - Brynn - is a feisty and independent unmarried lady, paraded around in balls and social events by her parents (namely, her mother), who want her to get married. Except she wants to marry for love, and not for title or arrangement. One thing is for certain - she really does not want to marry the cold and handsome Lord Archer, whom she's known since they were younger.

Archer seems cold and distant, but he is brimming with selflessness and a passion for helping the less fortunate. He is the heir to a dukedom in dire straits, so donning the Robin-Hood-esque disguise is how he helps the poor. Archer is noble and honorable, extremely polite and perfectly groomed. He's also wickedly charming and considerate, but few know this side of him. Most think that he is a cold and mysterious man. But he's the heir to a dukedom, so most people don't care about his antisocial behavior.

I do like hate-to-love romances, and the romance in this book was just about that. Granted, I thought a lot of Briannon's hostility towards Archer was unwarranted and uncalled for, but the general dynamic between the two of them was really passionate. They clashed like fire and ice. And there were a few steamy kisses, one (yes, one) sex scene which was okay, nothing special. I liked the development of the relationship, but I definitely thought there could have been more heat to the romance, especially given how passionate both of them are.

Overall, this wasn't bad. But read on for what I didn't necessarily like.

Briannon got on my nerves. I understand that the authors are trying to portray a strong and independent woman, and I'm all for it. But they authors should definitely keep in mind that they're writing in a 1700s/1800s setting. Yes, this is fiction, but it is historical fiction. Briannon was entirely too unconventional and got away with way too many acts and attitudes that were too brash.

And then there was the fact that, even for modern times, Briannon was brash. She was downright hostile towards Archer, and I couldn't quite understand why. Especially since she was attracted to him, started to like him, but was still hostile towards him. It was rude and petty. The authors were going for a strong woman, but she also appeared to be a bit cruel.

I liked Archer, but I thought that he and Briannon were both one-dimensional. There wasn't much character growth, for Briannon, and I was hoping for more from Archer. He showed the most character development, but even he felt flat to me.

I have so many unanswered questions, and this bothered me probably the most, out of anything else. Graham, Briannon's older brother, teaches her swordplay and how to shoot a gun. I wanted to know WHY he was doing that (since it is very rare in this time period). What was the reason? The pair both said over and over how their mother would kill them if she found out. So, why? I support this but it's not quite historically accurate. Especially swordplay - what was the point of introducing swordplay? Shooting comes in handy in the book, but not swordplay.

Another question - why was Archer rumored to have a rakish reputation? He's supposedly cold and unfeeling - oh, and a rake by reputation. Where did that reputation come from? We literally meet NO ex-lovers, And it's clear, after reading from his POV, that he isn't like that. So where did that reputation come from? The authors drop that in there (probably to make him seem like more of a "bad boy/alpha"), but never expounded upon this.

Same with Graham! Graham isn't a huge part of the story, but he also supposedly has a rakish reputation. And yet, Briannon talks as if he is not a rake. But Archer knew him when they were younger, and Archer knew him to be a rake. This inconsistency was never addressed. And I'm still not sure if he actually is a rake, or not. It matters because there are two reputations for Graham (and Archer), and the authors did not make either clear.

And there is the history between the men. They went to school together, or something, and they got along. But Graham hates Archer now, and Archer doesn't love Graham. We get no details as to what happened. Was it a woman? Did Graham think Archer was never good enough to be associated with his family? I'm not sure where the animosity came from, why the men were at odds, but I know for sure that the authors never addressed this. Again, they dropped the detail into the story, and didn't explain it at all.

And can we talk about how Briannon doesn't know Archer or his personal life at all? Archer is not as one-dimensional as Briannon, and he does have a pretty rough past, and his familial life sucks too (past and present). I didn't get the sense that Briannon wanted to ask Archer questions about himself, or wanted to dig deeper. There was a lot of lust on the surface, but did she really care to get to know him? I felt bad for the guy. He gets to know her well, but she's a cold, cruel, and selfish woman.

All of things might seem minor or subjective, so it's best if you form your own opinion (assuming you were previously interested in this book). The little things add up though!

I don't recommend this book. It's not the best example of historical romance, or even close to such. I could recommend so many better authors/series (Elizabeth Hoyt, Tessa Dare, Elizabeth Boyle, Caroline Linden, Katharine Ashe, etc.). This was an okay first attempt by this duo, but it was not great. Not worth rereading. Not worth reading if you'd never heard of this book or weren't already interested.

2.5 stars -> rounded up to 3 stars. I think this book had potential, and I might continue with the series. Maybe. I had high hopes, because of the Robin Hood aspect. I'm somewhat disappointed, though I don't regret giving this book a chance.