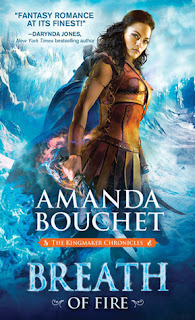 SHE'S DESTINED TO DESTROY THE WORLD...
"Cat" Catalia Fisa has been running from her destiny since she could crawl. But now, her newfound loved ones are caught between the shadow of Cat's tortured past and the threat of her world-shattering future. So what's a girl to do when she knows it's her fate to be the harbinger of doom? Everything in her power.

BUT NOT IF SHE CAN HELP IT
Griffin knows Cat is destined to change the world-for the better. As the realms are descending into all-out war, Cat and Griffin must embrace their fate together. Gods willing, they will emerge side-by-side in the heart of their future kingdom...or not at all.

Only two books into the series and I'm already declaring this trilogy a new favorite. I don't think I've ever read anything quite as unique as this fantasy romance series. I also can't remember the last time I was in love with a sequel novel as much as I was the first book - or almost as much. While A Promise of Fire is still the better of the two (in my opinion), I loved Breath of Fire.

This book is nonstop action from start to finish. Cat and Griffin and the rest of Beta Team are back in the Sinta castle, but there is much to be done, with the Power Bid in full effect. With the Sintan borders unprotected, Cat and Beta team leave home to journey to the Ice Plains, in order to find Centaurs who might be persuaded to defend the Sintan borders. But reaching the Ice Plains is obstacle enough, let alone finding the fabled Chaos Wizard who can help them find the Centaurs. And even if they get the Centaurs to help - Cat and Griffin must find a way to take down the Tarvan royalty. Cat may be the key to Sintan success - or their destruction.

I think the most unique aspect of this series is Cat's voice. She is hilarious and sarcastic and so prickly. This series is written entirely in her first-person perspective - there is no dual perspective - and I actually love this because it's fun to follow the story from her perspective. She's so entertaining! I love how Bouchet writes Cat's voice, and the story.

I adore Cat. I couldn't love her more, to be honest. She's so funny, but she's also tough as nails and very selfless. She doesn't want to be Beta Fisa, or any kind of royal in charge, but she's a natural. She's intelligent and experienced in so many different things, but she isn't a hardened, jaded person. She's got a mean streak and she is fierce, and she has a low opinion of herself at times, but she's a warrior and a fighter, and I love how she keeps going. I especially love how she allows herself to be surrounded by people who care about her. Her relationship with Griffin goes from solid to airtight and cemented in this book, because she really really lets him past her defenses. I am glad to see Cat let the walls down, with Griffin and with his family.

Griffin! My favorite. He's the big bad Beta, an overprotective and loyal warrior, but he's more than that. He is clever and considerate, a gentleman and at the same time, an alpha to the core. His temper is a live wire, so it's fun to see him and Cat bump heads constantly. They are perfect for each other! I love how he looks out for her all the time, but he also backs down a little in terms of dictating orders (when it comes to Cat). He lets her be, and trusts her judgement, which is wonderful to see.

I mentioned this already, but Griffin and Cat's relationship gets even stronger and more unbreakable, in this book. Cat lets Griffin in, and it's amazing how different and how strong their bond becomes, because of that. Emotionally, their relationship strengthens, but also physically. Let me tell you - Bouchet turns the heat up, in this book. Like, woah. The first few chapters? Be prepared to fan yourself. I loved seeing Griffin and Cat lose control! And throughout the book, not just in the beginning.

One thing that I was worried about was Griffin and Cat getting separated, or one of them getting captured and hence the separation. This is a common and annoying trope in sequel novels in trilogies. But I am happy to say that there was no "sequel separation" in this book! Griffin and Cat are almost always together in this book, which was a relief. I was so worried that I'd spend the whole book anxious and worried sick about one of the characters.

I love the secondary characters! I don't consider Griffin a secondary character (he is definitely a protagonist, even if he doesn't get his own perspective), but Kato, Carver, Flynn, and several others definitely are. I love Griffin's family, and Beta Team. We get to see more of Kato in this book, and I adored him and his (brotherly) relationship with Cat. There was a part of this book that broke my heart for him - like I was almost physically sick for him. Hopefully there is some silver lining to that part of the story, because I'm still sad about it. In any case, the secondary characters were almost as entertaining as Griffin and Cat!

The story gets more and more complex, as a good sequel novel will do! We see a lot more Olympian/mythological stuff (creatures, abilities, etc.), and more is revealed, in terms of Cat's past, what she expects from the future, and her family. Griffin (and everyone else) finds out about Cat very early in this book, which was also a relief (that was a huge secret!). Cat and Griffin and the team travel to find the Centaurs in the Ice Plains, but the story isn't finished there. Finding a way inside Tarva isn't easy, but Griffin and Cat are determined to do so.

Overall, I am quite pleased with this book! I especially love the sweet news at the end (though, like Griffin, I suspected certain things early on - there was a lot of foreshadowing). I also like that this book does not end on a cliffhanger - phew! There is a lot that needs to be taken care of and resolved, in Heart on Fire, but I like that Bouchet ends this book without needing a cliffhanger. Artfully done!

But Alyssa, why didn't you give this book five stars? You clearly loved it! I did, but some part of me didn't love it quite as much as I loved A Promise of Fire. There were parts of this book (Breath of Fire) that broke my heart, from Kato, for Carver, even for Cat and Griffin. In adult romance novels, you expect your main couple to be "fine" at the end of the book (or series), so I'm not too worried about Cat and Griffin. It's the secondary characters that I worry for - and in this book, not everyone comes out "fine".

Also, keep in mind that I really really loved A Promise of Fire. Sometimes it's hard to come close to things that I really loved. Additionally, maybe I miss how much simpler things were in that book! Everything is do-or-die in this book (and rightfully so).

4.5 stars -> regrettably rounded down to 4 stars. I can't quite give this 5 stars because for me, it wasn't as good as A Promise of Fire (not by much though). This book lost none of the wow factor that A Promise of Fire held, and it definitely didn't fall under the sequel slump spell. I eagerly await Heart on Fire!


Check out the preorder incentive! 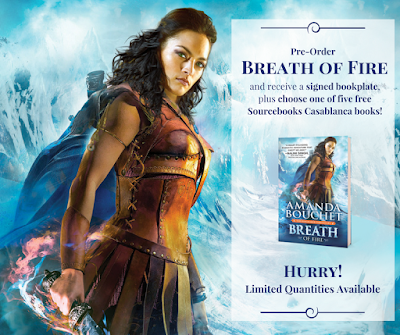 Win A Promise of Fire!