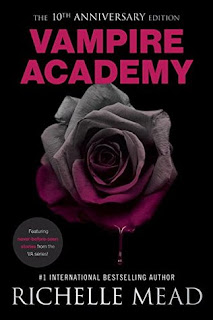 Richelle Mead celebrates 10 years of Vampire Academy with an exclusive, never-before-seen collection of stories that sheds new light on the world and its players:

The Turn and the Flame takes a deeper look into the dark stain on the Ozera dynasty...

The Meeting gives us a glimpse of Rose Hathaway through Dimitri’s eyes...

Hello My Name Is Rose Hathaway tracks the shenanigans that ensue when Rose and Dimitri become unlikely teammates in a high-stakes scavenger hunt...

Lissa Dragomir is a Moroi princess: a mortal vampire with a rare gift for harnessing the earth's magic. She must be protected at all times from Strigoi; the fiercest vampires--the ones who never die. The powerful blend of human and vampire blood that flows through Rose Hathaway, Lissa's best friend, makes her a Dhampir. Rose is dedicated to a dangerous life of protecting Lissa from Strigoi, who are hell-bent on making Lissa one of them.

After two years of freedom, Rose and Lissa are caught and dragged back to St. Vladimir’s Academy, where vampire royalty and their guardians-to-be prepare for a life fraught with danger. Rose and Lissa must navigate their treacherous world and never once let their guard down, lest the evil undead make Lissa one of them forever. But soon Rose finds herself gripped by temptation of forbidden love, leaving Lissa exposed to Strigoi attack. Now she must choose between the best friend she lives for, and the man she can't live without….

Enter for a chance to win one of five (5) paperback copies of Vampire Academy 10th Anniversary Edition by Richelle Mead (ARV = $11.99 each).

NO PURCHASE NECESSARY. Enter between 9:00 AM Eastern Time on November 29, 2016 and 11:59 PM Eastern Time on December 5, 2016.  Open to residents of the fifty United States and the District of Columbia who are 13 and older. Winners will be selected at random on or about December 12, 2016. Odds of winning depend on number of eligible entries received. Void where prohibited or restricted by law.

Have you read this series?

Friends! I have not read any of the books in this series (nor have I read many Mead books in general). Have you read the Vampire Academy books? Do you think I would enjoy them? Convince me in the comments section!
Posted by Alyssa at 12:00 AM