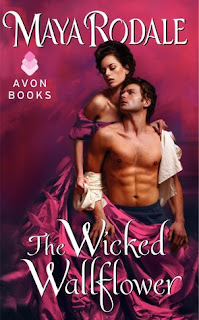 Lady Emma Avery has accidentally announced her engagement—to the most eligible man in England. As soon as it's discovered that Emma has never actually met the infamously attractive Duke of Ashbrooke, she'll no longer be a wallflower; she'll be a laughingstock. And then Ashbrooke does something Emma never expected. He plays along with her charade.

A temporary betrothal to the irreproachable Lady Avery could be just the thing to repair Ashbrooke's tattered reputation. Seducing her is simply a bonus. And then Emma does what he never expected: she refuses his advances. It's unprecedented. Inconceivable. Quite damnably alluring.

London's Least Likely to Misbehave has aroused the curiosity—among other things—of London's most notorious rogue. Now nothing will suffice but to uncover Emma's wanton side and prove there's nothing so satisfying as two perfect strangers…being perfectly scandalous together.

Anyway, this book was the last historical romance book I've read - I haven't read one since! Not because I don't have any to read, or because I'm sick of the genre... but because I've been swamped with deadlines and release dates and COLLEGE. So, this review might seem kind of scant and vague. It's been a while since I read this book, and I do remember enough of why I liked it, and what I didn't like.

So, Emma and her somewhat dimwitted friends have a plan for Emma: send a letter to the post, announcing Emma's engagement to none other than the magnificently eligible Duke of Ashbrooke, the perfect specimen of a male. That will help her reputation - prove that she is more than a wallflower. Right? Foolproof?

Well, maybe... until Ashbrooke totally rolls with it. I thought that was HILARIOUS. He went with the silly plan, without knowing much about Emma, except that she is London's Least Likely to Misbehave. Good girl Emma and yummy Ashbrooke. Nobody believed that they could be a match!

It happened! And this book goes through the consequences of that letter getting to the post, and Ashbrooke playing along. Ashbrooke takes Emma to his aunt's house, to participate in the Fortune Games, in which couples compete to win the aunt's inheritance. It should technically go to Ashbrooke, because of the familial relations, but the aunt is HILARIOUS and makes everyone work for it. That's part of the test - for Emma and Ashbrooke to convince Ashbrooke's aunt that they are in love.

I love the lengths that Ashbrooke went to, to prove to Emma that he truly wanted to marry her, when he came to that decision. It ceased to be about winning the Games and inheritance money, or even convincing society that they are a legitimate match. Ashbrooke is thoughtful and considerate, and I feel like Emma totally does NOT deserve him. She wasn't always nice to him.

Not that I expected her to fall over herself swooning because it's Ashbrooke. Good for her for keeping her composure. But still, she could be a little nicer to the guy that saved her reputation! Because we all know how important reputation and status were in this historical time period.

Anyway, I truly liked the very end of this book - in which Emma had to work hard to get back Ashbrooke. One of the things that I dislike a bit about some historical romance novels is that the male has to be the one that convinces the female to stay together. In this case, Emma had to be the one to go the extra lengths to keep Ashbrooke. Huzzah!

Read this one, if you like historical romance novels. It's a good one!

Ugh, so, the first part of this book, in which Emma's friends write the letter to the post, to announce the match of Ashbrooke and Emma? Ridiculous! Who does that!? I mean, I know this whole book would not have been possible, without that detail, but seriously?! I wanted to conk Emma's friends on their empty heads. That plan made NO SENSE.

Also, Emma is a tad bit *too* passive for me. At the very end, she grows a backbone to get Ashbrooke back. But otherwise? Passive. And mean to Ashbrooke. Bad. Ashbrooke is FANTASTIC.

Yup! I really liked this novel. I feel like one of the problems people have when they read a lot of one type/genre of book is that they find them to be formulaic. I think this book was a refreshing, unique read - definitely not a formulaic historical romance novel. So, I believe that historical romance lovers - seasoned and novices - will like this one.

4 stars. An enjoyable historical romance read! I'm so glad I had the opportunity to read this one.