Review: The Brokenhearted by Amelia Kahaney 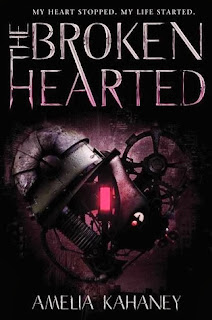 A teenage girl is transformed into a reluctant superhero and must balance her old life with the dark secret of who she has become.

Prima ballerina Anthem Fleet is closely guarded by her parents in their penthouse apartment. But when she meets the handsome Gavin at a party on the wrong side of town, she is immediately drawn into his dangerous world. Then, in a tragic accident, Anthem falls to her death. She awakes in an underground lab, with a bionic heart ticking in her chest. As she navigates her new life, she uncovers the sinister truth behind those she trusted the most, and the chilling secret of her family lineage…and her duty to uphold it.

The Dark Knight meets Cinder in this gripping and cinematic story of heartbreak and revenge. From Alloy Entertainment, this inventive new superhero story is sure to captivate any reader.

Oh, how I wanted to like this book. I was excited to start it! Gorgeous cover, debut author, Harper title, science fiction genre... it sounded perfect for me! I tagged this novel under "dystopia" as well, but I think futuristic is a better word. This novel had the potential to be awesome, but for me, it fell a bit flat.

Anthem gets into the wrong kind of trouble really quickly in this novel. Right away, we can tell that she doesn't like her life as much as she would like to. She is no longer enamored with her boyfriend. She doesn't like the rich life - she feels disconnected from her parents. Things are perfect on the surface, but below the surface is a sad, lonely girl.

Then Anthem meets Gavin, and everything changes. She falls head over heels in love with him... and drama. Weeks pass, and they continue seeing each other. They get hot and heavy, and that same night, Gavin gets captured. And Anthem? Anthem falls to her death in a freezing cold river, but wakes up, alive.

With a new start and a bionic heart that beats ten beats per second, Anthem has a different purpose with her life. All she wants is revenge. Never mind the upcoming ballet, Giselle, and not getting the prima role. Never mind faking a relationship with her recent ex-boyfriend, who is blackmailing. Never mind losing her best friend. Everything, to Anthem, is about revenge. Kill Rose and her gang.

The story is unique, especially with the bionic heart aspect. I wasn't totally drawn into the plot, or the characters, but the story went by pretty quickly. Or maybe I was reading really quickly. But I wasn't all that impressed by the story.

I already said this, but I wasn't impressed by the plot or the story or whatever. It seemed kind of boring and superficial, and weird how all of that happened to Anthem. I mean, did that guy (if you read the book, you'll know what I mean) set her up? HOW? The author never explained, at the end, how that guy set up Anthem, and survived everything, and fabricated everything.

The characters are kind of blah, as well. I don't really care for Anthem. Her logic is pretty poor. I mean, you go out with a guy for a few weeks, and you're TOTALLY in love with him? He is SOOOO worth all that work? Really? NO. Irrational, illogical... stupid. Her decisions are just STUPID.

Oh, and the romance in general? Weird. There is a love triangle of a sort, but it's not an obvious one, with the two males bot actively trying to win over the female. But I didn't really like the romance. The one guy, I really like, but he seemed more of the friend-type. The other guy was on fire, and then, ice-cold. And the heroine was totally set on one guy, but she liked the other guy as well, even though she knew that the guy she really liked wasn't coming back to her.

I already said the plot was predictable, but seriously, the climax was anticlimactic, because you know it's coming, and you know what comes after that. And the ending. It's an ending, but it's not. I don't know if there will be more books to follow, but it seems like there should be more to it.

I just don't think this was the most impressive debut, or book, in general. Maybe I'm not being specific enough, but I really just didn't enjoy this book as much as I hoped I might have.

Not really, no. I'm actually impressed that I finished this one, given all the negative things. It seems heavy on the science fiction, but it really wasn't, which made me sad, because I love science fiction. I think the premise of this book was great, but the execution was not so great. But this could just be me!

2 stars. Definitely not one of Harper's best titles, but I suppose I'm glad I got the chance to read this novel!