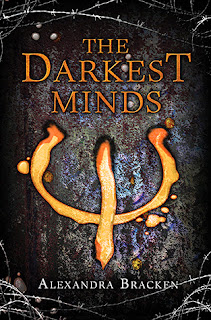 When Ruby woke up on her tenth birthday, something about her had changed. Something alarming enough to make her parents lock her in the garage and call the police. Something that gets her sent to Thurmond, a brutal government “rehabilitation camp.” She might have survived the mysterious disease that’s killed most of America’s children, but she and the others have emerged with something far worse: frightening abilities they cannot control.

Now sixteen, Ruby is one of the dangerous ones.

When the truth comes out, Ruby barely escapes Thurmond with her life. Now she’s on the run, desperate to find the one safe haven left for kids like her—East River. She joins a group of kids who escaped their own camp. Liam, their brave leader, is falling hard for Ruby. But no matter how much she aches for him, Ruby can’t risk getting close. Not after what happened to her parents.

When they arrive at East River, nothing is as it seems, least of all its mysterious leader. But there are other forces at work, people who will stop at nothing to use Ruby in their fight against the government. Ruby will be faced with a terrible choice, one that may mean giving up her only chance at a life worth living.

I literally JUST read this book yesterday, and woah, you all, WOAH. First, I cannot believe I owned this book for so long, and put off reading it. The thing is, there were so many great reviews for this book, and I didn't want to be disappointed. When I requested an ARC of Never Fade (book two) back in May, I did it with the intention of basically forcing myself to read The Darkest Minds. If I requested a physical or electronic ARC from a publisher, then I would make sure that I read it (at some point). Physical ARCs have priority, so I knew that I would have to read The Darkest Minds and Never Fade in good time (around the release date of Never Fade).

Blogging/reviewing tangent aside, the other reason why I was like WOAH after reading this book, is because WOAH, that book is intense! I don't know what I was expecting, but it certainly wasn't what I got (in an excellent way)! I can totally understand why the reviews for this book were so positive - this book is amazing!

In Ruby's world, many children are born with  Idiopathic Adolescent Acute Neurodegeneration (IAAN), in which they have supernatural powers. Ruby was ten when she was taken to a camp with other children around her age. She stayed there for six years - though she had no idea it had been that long. Six years of grueling labor, torture in the form of noise that only the children with IAAN can hear, and fear. Living in fear of what will happen to her, what became of her parents... of what she is.

Ruby is very weak, physically and mentally, when she escapes from the camp with the help of a rogue doctor. She is separated from this doctor and the other person that escaped (Martin), and joins a group of teenagers her age, with IAAN. Zu, a yellow, is about twelve years old, and a mute. Chubs (Charles) and Liam are Blues (I believe Chubs is a Blue). Chubs doesn't want Ruby to join them, but Liam, the super sweet, loyal, and trusting leader of the trio, lets her stay. And thus begins Ruby's journey - to becoming stronger, growing, and fighting back.

I totally simplified the plot of this book. This book was about five hundred pages, and A LOT happened in one book. But trust me, I was never bored or frustrated with this book. The five hundred pages go by quickly. I think I read this one in under three hours (but I'm a fast reader too). I was thoroughly hooked in this book - the story was very engrossing! I wanted to know what Ruby would do, what would happen to Cate,  who the Slip Kid was.

Ruby is a likable character. In the beginning of the book, she is extremely weak. She watches her friend get tortured for standing up for her, and then accidentally uses her powers on that friend. Ruby does nothing to help herself, and cares too much about others. I like this quality about her, because it fits her well, and contributes to the story nicely. By the end of the story, her character develops into a more headstrong, tough heroine. She is afraid of what she is, what she will become, but she isn't afraid to try and help herself, and fight for what she wants.

Liam is another beautifully structured character. He's sort of a static character, meaning that he doesn't change, but that works for this story. He is loyal and kind and thoughtful and sweet and so, so nice. I can't get over how nice he is. But he is also protective and fierce. He has his moments when he gets defensive and almost predatory, and usually, Ruby is involved. I love seeing him get worked up over her!

So... romance? Yes. It's subtle and simple and sweet. Ruby and you know who don't just fall into lust and love the moment they see each other. It takes almost all five hundred pages for them to have much physical contact at all (for good reason though), and then physical contact in a romantic sense.

Remember, Ruby, Liam, Chubs, and Zu were all in camps. The last three were in one in Caledonia (I believe), and Ruby was in Thurmond, so she was in a different camp. BUT, all of them have psychological damage because of their time spent at the camp - especially Ruby. You can tell with Ruby - that is definitely something that Bracken showed very well.

The climax of the book is about when Ruby and the gang are going to meet the Slip Kid. I knew EXACTLY who the Slip Kid was, from basically the mention of the nickname, the "Slip Kid". It's pretty obvious, if you read carefully. I don't like the Slip Kid very much, and you probably won't either (if you haven't read this book yet).

Without giving anything away, the ending is the thing that bothered me a teensy bit. There was this specific part of it that made me slightly sad. I mean, I'm sure things will be explored in Never Fade, but OH MY GOSH!

I'm glad I have Never Fade. It release soon anyway, but I'm glad.

TOTALLY! Science fiction for the win! This book is definitely something that science fiction lovers will enjoy, or dystopia lovers. It didn't have the same feel as the usual dystopia, but it could be classified as one. But the science fiction! Squee!

4.5 stars -> rounded down to 4 stars. I really enjoyed this book! Never Fade, here I come!