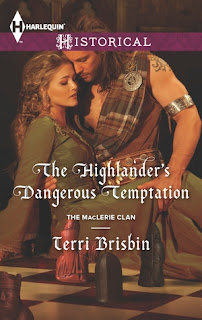 Cursed by past tragedies, notorious Highlander Laird Athdar MacCallum has devoted himself to leading his people - and has vowed never to marry again. Until he is utterly disarmed by the innocent beauty in the eyes of Isobel Ruriksdottir….

Isobel is drawn to the vulnerability she senses behind the fearsome facade of the clan chief. But with his formidable reputation, he is strictly forbidden. Being together can only lead them into danger, yet the temptation to risk all for their perilous passion is impossible to ignore.

Two adult romance reads in a row! Go me, right? I'm on a roll with these adult books. Not that the Young Adult books are getting boring - they so are NOT - but it's refreshing to read something different, something... undiluted. No twisted romance plots or love triangles or anything like that.

This story is no exception - in fact, it was quite different from what I was expecting. The romance did not follow the usual timeline that I have mapped out in my head, when reading historical romance novels (and romance novels in general). But that turned out to be a good thing!

Most romance novels start in the same way. A male and female either meet each other, or already have met, and there is some immediate chemistry between the two of them. In this story, Athdar and Isobel know each other - or at least, they have met before, and their families know each other. Athdar is quite a few years older than Isobel, but Brisbin has a way of weaving the story so that it doesn't seem so strange. Remember, men and women did that all the time in history. Older men married young women.

Anyway, as it turns out, both of them are totally attracted to each other. And one character, Athdar's sister, seizes an opportunity to throw Athdar and Isobel together. Athdar's sister (Jocelyn), Isobel, and Isobel's mother travel to Athdar's keep, to get some herbs from the healer at Athdar's keep. More importantly, Jocelyn wants Isobel and Athdar to become better acquainted.

Well, one thing leads to another, and suddenly, Athdar and Isobel are married. WOAH, right? That's at only 50% of the story! I couldn't believe it! Usually, in historical romance novels, the two protagonists don't get married until the end of the book, or close to the end. Well, halfway throughout this story, Athdar and Isobel get married.

The first part of the story deals with Isobel and Athdar falling in loves. Brisbin does a beautiful job of putting these two together, of making them fall in love, in a progressive but timely manner. Like, the relationship grows steadily, but as readers, we know time passes. That's nice.

Then they get married. Then they adjust to being married - which is a tad bit funny, because both of them feel awkward, for one reason or the other. The final "big" part of the story deals with a condition that Athdar has. He blacks out at times, and doesn't remember this one event in his childhood - one event that changed everything, and affects his immediate future.

Thus, we come to the climax. An interesting climax, especially when the two major plot lines merge. Isobel's father arrives, and Athdar's past catches up to him. Fret not, because the ending is still a great ending. But this book has an actual climax, with danger directed towards the male protagonist AND the female protagonist. Another interesting thing.

I really enjoyed this story, you all. Not just because of its interesting differences, but because it was a genuinely great story! I love historical fiction, and ESPECIALLY medieval fiction, and I think that Brisbin did an excellent job with bringing across the medieval aspect of this story, without drowning readers in historical information or linguistics. All in all, a pretty awesome story!

The only thing that bothered me (and it really didn't bother me *too* much) was how Brisbin brought about Athdar's condition. I could see that she was trying to slip it in progressively, but I feel like the majority of the information about the condition was thrown at readers. Like, subtle hints were made throughout the story, but the condition itself was brought about quickly, sort of rushed, towards the end.

The beginning is all about the chase, the challenge, the chemistry. But the remaining 35% (ish) dealt with Athdar's condition. To me, it could have been more spread out. It would have made the summary more believable - because the entire time, I was trying to figure out what the conflict would be, besides Isobel's father Rurik going crazy about his daughter staying alone at Athdar's keep.

I think yes! Yes, I would. If you're a fan of historical romance novels, then I definitely think you want to read this one! Don't miss it. And even if you're a fan of contemporary romance, this book is easy on the history and information dump. It's not bad, especially for people who don't like history or think that history is boring. This is a good read, for any romance fan!

4 stars. An enjoyable historical romance read! I really liked this book, and its unique plot, and fresh perspective on Highlanders. I really should go back and read the previous books in this series!