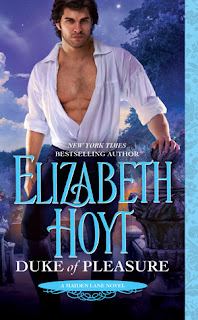 This book is yet another stunning addition to a wonderful and heartwarming historical romance series. Elizabeth Hoyt is one of my favorite authors, and this series is one of my favorites. It's no surprise that I loved this book, because Hoyt has yet to disappoint me. I know I can count on her to deliver a sweeping romance, adventurous plot, and lovable, well-rounded characters.

In previous books of the series, we find out that Alf, the street urchin of St. Giles, is actually a woman. She's disguised as a teenage boy, but she's actually a twenty-one-year-old female, orphaned sixteen years ago. She also happens to be the new Ghost of St. Giles. One night, as the Ghost, she saves the Duke of Kyle from certain death. The next morning, the Duke calls on her services as Alf the urchin to find out who wanted to kill him. The pair work together when they realize that the Lords of Chaos are behind the attempt of the Duke's life, as well as for another crime that never went punished.

I liked Alf as a street urchin, doing odd jobs for the aristocracy. Godric St. John took her under his wing, and has been training her properly as the Ghost. Alf is fierce and brash and loyal, honest and stubborn and a little mischievous too. She comes from nothing, with no secret past. Sixteen years in St. Giles by herself has taught her how to survive, and endure.

Hugh Fitzroy, Duke of Kyle, is quite an interesting man. He seems detached and immovable, but underneath, he is in pain. His wife died months ago, and the gap she left has not grown smaller. Hugh did not love her, but she was a good mother, and his two sons are not the same without her. The older boy, Kit, hates Hugh (Kit is seven), and the younger boy, Peter, has nightmares and terrible tantrums (Peter is five). Hugh is gentle and patient with his sons, but you can tell how much Hugh is hurting, and how badly he needs something bright shining in his life.

Usually I don't love stories that involve children, especially children not from our main couple. But I adored Kit and Peter (especially Peter). Kit is a lot like his father - silent, brooding, admonishing at times, and rather lordly for a seven-year-old. Peter is more rambunctious and playful. Both boys are adorable, even as they are hurting from the loss of their mother.

So, a significant part of this book was about Hugh's relationship with his sons, and how it changes at this point in time. Kit thinks he hates his father, but this changes gradually. Peter's tantrums and nightmares lessen. Hugh makes himself more and more present in his children's lives, and this makes a difference.

I love how, in every book of Hoyt's, she makes her protagonists (and secondary characters!) so unique. There is always something (or things) that sets the pair apart. In this book, Hugh is the son of the King and has two children and he's a widower, and Alf is an untitled street urchin who disguises herself as a boy. Different, I tell you.

I loved watching these two fall in love. The first third of the book (a little more, perhaps) has Alf still known to be a boy, and then before the halfway point, Hugh finds out. Keep in mind, Hugh has kissed the Ghost several times (knowing the Ghost is a woman), but he had no idea that the Ghost was Alf and that Alf was a female. Then he finds out and... things get steamy really quickly. Hugh was taken with the Ghost, and when he realizes that the Ghost and Alf are one and the same, he is all in.

I like how drama-free their relationship was. They wanted, they took, they had. Neither of them is concerned about one being a Duke, the other a poor orphan who is disguised as a boy. These two are really hot together, but they're also really good together. Alf is what Hugh needs, and Hugh is what Alf needs, and they are perfect for each other.

At first I thought it was strange that the author included another perspective in this book - the perspective of Hugh's wife's best friend. Initially, it looked like she and Hugh were unofficially planning to become engaged (because in this society, a widower with children would kind of have to get remarried), but Iris (Lady Jordan) shuts this down really quickly when she realizes that Alf and the Duke have a connection. There are no feelings involved, between Hugh and Iris. Iris is incredibly intelligent and astute, and one of my favorite characters in this book.

Aaaaand, on that note, she's the protagonist of the next book! I am SO intrigued. As soon as this one particular man was introduced in this book, I KNEW he would be her love interest. And goodness! I am so intrigued.

I think I'll wrap this up here! This book was a beautifully written story about a broken man and a lost woman who needed to find each other and find their way. I loved reading about Hugh and Alf. This story had me going through so many emotions, and I loved it.

I can't think of anything specific that I didn't like, though I would have loved to see more cameos from other Maiden Lane couples. We see Godric and Megs, but no one else. I hope the next book features some more pairs!

4.5 stars -> rounded down to 4 stars (simply because it's not a new series favorite, though I do love the book). I am incredibly excited to read Duke of Desire! Iris and Raphael are going to be an extremely unconventional couple, I can feel it.