Review: Destined for a King by Ashlyn Macnamara 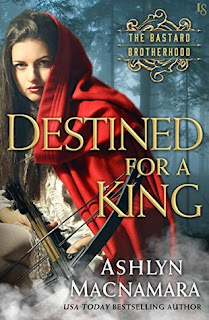 Bestselling author Ashlyn Macnamara, hailed by Jennifer McQuiston as “a born storyteller,” introduces the strapping, audacious outlaws of the Bastard Brotherhood in this enchanting tale of forbidden love between supposedly sworn enemies.

Though she is intended for the king, Calista Thorne picks up a crossbow to defend her ancestral home, Blackbriar Keep, from a gang of landless knights. She even manages to sink a poison-tipped arrow into their commander, who survives long enough to conquer the Keep and claim Calista for his own. Now, with her father’s life at stake, Calista must nurse the brigand back to health, and the strangest thing happens: She finds herself fascinated by his tautly muscled body, and enthralled by his hotly whispered demands.

Ever since his father’s death, the fearsome warrior they call Torch has been consumed by his quest for revenge. Taking Blackbriar Keep is the first step in that plan, and—by the three gods—it won’t be the last. But after taking one look into Calista’s smoldering gray eyes, Torch discovers a passion nobler than retribution. He will fulfill his destiny and take her from the usurper king, even in his weakened state. For with Calista’s love, no man has ever felt more powerful.

I feel like such an early bird reviewer right now! This book publishes in exactly two months, and so I apologize to the publisher for posting a full review so early. I casually started this book in-between the Young Adult novels I was supposed to be reading, and I was sucked in this story. Destined for a King was an extremely well-written fantasy romance story, and just what I needed!

Calista Thorne has been promised to King Magnus Vandal for years, thanks to negotiations between her father and the king. Her father is lord of Blackbriar Keep, a small holding that must rely on the strength of its neighbors for protection. Which is how the warrior Torch of the Bastard Brotherhood is able to claim the Keep easily, with his Brotherhood. Calista manages to shoot Torch while the siege is taking place, but the injury isn't enough to stop Torch. He becomes lord of the keep, and he claims her hand in marriage. Calista doesn't know everything at first, but Torch has a plan, a plan that involves marrying her and taking revenge on King Magnus, who took something from Torch long ago. But Torch will come to earn that his revenge isn't all that he wants - he wants Calista to love him as well.

Have I professed my love for fantasy novels enough on this blog already? Seriously, fantasy is my favorite genre. I love Young Adult fantasy, but I also really love adult fantasy (specifically, adult fantasy romance). Books like Through a Dark Mist by Marsha Canham, The Winter King by C.L. Wilson, and A Promise of Fire by Amanda Bouchet are among my favorites. I think I need to add Destined for a King to that list!

This book is told from Calista and Torch's alternating POVs, in third person. The story starts with the siege of the Keep, and within one or two pages, Calista shoots Torch with a deadly arrow. Torch claims the Keep and Calista as his bride, injury notwithstanding, but then collapses. Calista is charged with nursing him back to health, or her father will never leave the dungeon cell he is placed in. And so the physicking begins. Torch's wound is not bad, but he catches a fever, and the healing processes takes days.

I do like how the author uses the injury and fever to draw the pair closer together. Calista obviously doesn't want to be forced to marry the brute that just took over her home. But she can't help but notice how handsome he is, how much more gentle he is now that he is vulnerable. She's very attracted to him, but she's not stupid. Torch is also very attracted to his healer and future bride, but he's bent on seducing her. She's part of his plan, but he also wants her to want him. He refuses to force her into anything, as he wants a willing bride.

Hate-to-love romances are often my favorite, and you could probably categorize this story's romance as hate-to-love. There is so much banter and barbs and smart talk between Calista and Torch. Calista may be a bit younger and definitely more innocent, but she goes toe-to-toe with Torch. I love it!

Torch has a necklace with a Scrying Stone, that lets him see briefly into the future, or even the present. For a long time, the Stone has been showing him glimpses of Calista, so when he storms the Keep, he knows that they will marry. So he is set on seducing her. Calista, while seduced, wants a choice. I liked seeing this push and pull. Their relationship didn't seem Stockholm-Syndrome-y (or whatever the equivalent is, in this scenario), and I saw them genuinely falling for each other.

These two are seriously fiery together! Calista is a maiden who was supposed to marry King Magnus, and at first she doesn't want to get married to Torch, and doesn't want him to touch her. But the more he reveals, and the more he talks to her, the more convinced she is of who he really is (and who King Magnus isn't - a true king). Calista and Torch share some really steamy moments from the start, and this book has plenty of them throughout the story. But I liked that their relationship wasn't just steamy passion and lust. Calista has insecurities, Torch has mistrust towards her, but they learned and are learning to know each other. I also like that the marriage is about halfway through the book, so the couple really has to spend time getting to know each other even more, as husband and wife.

I adore these two. Calista is innocent yet mouthy and hates taking orders from Torch. Torch is a bit arrogant and wicked and loves issuing orders. He is fiercely protective and sooo alpha, and Calista is one of those quiet kick butt ladies. Such fun characters! And such a great pair.

This is a fantasy novel, and like any good fantasy novel, there is a war coming, and a clash between leaders. King Magnus isn't who he seems, and Torch is determined to have his revenge on King Magnus. Calista, who once might have defended King Magnus, wants to see him removed. The pair have their work cut out for them, with the Brotherhood. I liked the world-building, the setting, and the premise of the story!

This is part of a series, and the ending of this book really shows that! It doesn't end on a cliffhanger, but there are many aspects that are not wrapped up, and I couldn't help but get a little frustrated by the lack of pages at the end! Torch's sister Jerrah has gotten herself into a certain situation, and Torch's commander Kestrel has gone to rescue her. So! The next book is likely to follow Jerrah and Kestrel (Kestrel is a dude, by the way. I love the name!). Which makes me happy (because clearly there is something happening there) but also sad (because I adore Calista and Torch - the premise of this book, in terms of the romance, is what hooked me!).

Nothing specific? This was a wonderful and sometimes adorable and sweet story. And steamy too. I guess the one thing I would have wanted was for this series to be a continual story series and not a companion series. It's a two-edged sword; on the one hand, I love that we'll get to see Jerrah and Kestrel's story. On the other hand, I just do not think that Calista and Torch's story is over. And I also like them a lot. The summary of this book drew me in, with the whole "I'm taking over the Keep and taking you as my bridge" kind of thing. I'll miss Calista and Torch, even if they make cameo appearances in the next book!

If you like adult fantasy romance, I highly recommend this book! I was a tiny bit surprised when I liked it, simply because I've read one of the author's historical romance novels (I love HR novels), but didn't totally love it (it was okay). I had a better feeling about this book - and I was right! It's a wonderful fantasy story with a steamy and passionate romance. Win!

4.5 stars. I hesitate to round down to 4 stars, and I may change my rating in the future. For now, this book gets 4 stars. But I absolutely loved it, and it's going to end up in my favorites of 2016 list!