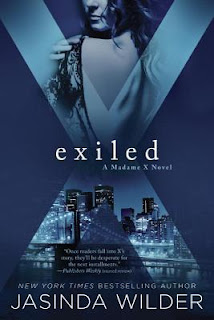 My name is Madame X.

My heart is torn in two.

And now I have to choose...

Caleb is everything to her: lover, caretaker, the man who gave her life meaning when she had none. But as she seeks the truth about herself and her past, she discovers that unravelling Caleb’s web of lies might very well be impossible.

Logan is everything she never knew she wanted: freedom, joy, and a passion she couldn’t anticipate. But is Logan’s love enough to save her from herself, from Caleb, and from the tumultuous truth of her past?

Caught between two equally compelling and seductive men, X must make the ultimate choice. But there’s more at stake than just her heart...

Seriously, I held nothing back.

Honestly I never should have read this series. I knew there was a love triangle before reading Madame X (book one), but I never would have read the series if I had known how bad it was. I have really enjoyed Wilder's books in the past, and I love Berkley's romance novels, so that I thought this series wouldn't be too bad.

If that makes sense.

Spoilers ahead, just so you're aware. Throughout this whole series, X (or Isabel, her real name), has been having sex with both Caleb (the man who rescued her years ago when she was in an accident that left her physically harmed and with no memory) and Logan (the man she meets in Madame X and falls in love with). This bothered me but not too much, because her and Caleb having sex seemed mechanical, detached, like a chore. It didn't seem real for either of them... until this book.

Several things here that I'm mad about: 1) that Isabel had sex with Caleb at all IN THIS BOOK. She made a choice, in book two! She chose Logan! But in this book, in the first chapter, she "falls back under Caleb's spell", and they have sex. Wrong. Wrong wrong wrong. Even she knows it's wrong, after the fact. During, she's loving it.

What's worse is that that time is different - Caleb just opened up to her about his past... and then they have sex. Uuuuuuugggghhhhh. Seriously, Isabel?

What's even MORE worse is how understanding Logan is, when Isabel tells him. He makes excuses for her, and tells her that it's okay and it doesn't matter and it's not her fault. Um, what? She wasn't raped. She didn't say no. She didn't push Caleb away. HOW are you making excuses for her?

That leads me to my next problem -- Logan seems way too perfect and understanding. He seems one-dimensional and so, so fake. How are you okay with the woman you love having sex with another man WHILE you're in a relationship with her? Making excuses for her too? He seemed way too okay with all of that.

Which leads me to my NEXT problem -- I don't really understand how Logan loves Isabel that much. I don't understand the basis of this powerful love. It didn't really matter to me in books one and two, because it seemed like their relationship was slowly growing, and Logan wasn't really moving heaven and earth for Isabel (not really). But he almost dies FOR HER, and he's totally okay with her having had sex with another man and then returning to him...

Look I'm a fan of monogamy, so I'm sorry if my tastes are getting in the way of my judgment of the book itself. If none of these things bother you, then you'll love the book.

Another thing, the big thing, that made me hate this book is that Isabel finds out that she's pregnant in this book. And of course, there is no way to know whose baby it is - it could be either man's. And guess freaking what -- Logan doesn't care if it's Caleb's or Logan's. I... I do not understand adults. If I knew that the baby my girlfriend is having (or had) is another man's, especially a man who took advantage of her, seduced her, practically raped her, I would not be able to look at the kid. No child asks to come in this world, but at the same time, Logan seems way too selfless in being totally okay with taking care of a child that could be that monster's.

Here's the icing on the cake -- Isabel finds out that she is having twins. And yup, you probably can guess what happens next: one of the babies is Logan's (with pale blond hair), and one is Caleb's (with dark hair and brown eyes). SERIOUSLY?! Jasinda Wilder, really?? Do you all know the statistical probability of that happening? It's almost zero. I wanted to burn the book when I read that. I get it, babies are human beings and deserve to be loved, blah blah blah. If I were Logan, I wouldn't be that understanding, and I wouldn't be able to look at the kid with love in my eyes. Maybe I'm selfish? But I wouldn't want to see the kid of that rapist/monster.

In a way, I understand why Wilder wrote that into the story. She wants Isabel to have something to remember Caleb by, to show how far Isabel has come from meeting Caleb, or something. But statistically speaking, you really can't just drop heteropaternal superfecundation into a book. Especially after magically dropping in twins. That's so similar to deus ex machina and that phenomena is a poorly literary tool.

Caleb turns into a crazy person in this book too - he kidnaps Isabel, almost shoots Logan again, fakes a car bomb. I don't know how Isabel still harbors some kind of positive feeling toward Caleb. Stockholm Syndrome or whatever. HOW was Caleb a love interest? Was anyone ACTUALLY #TeamCaleb? He is abusive, manipulative, disgusting, not to mention a pimp and a whore who sleeps with hundreds of women within a month. *vomits* Why did I read this series. Why.

I hate love triangles, but against my better judgment, I read Madame X. And I thought I liked it. I thought I liked Exposed, it seemed like love-triangle-y things were disappearing (plus the Caleb-Isabel sex decreased significantly and seemed more rape-y. NOT that rape is good, but it showed that Isabel started to see Caleb for who he was and what a monster he was). This book? This book showed that Isabel loved a rapist, a john, a pimp, a monster, for some dumba** reason. And Logan loved her for it. Someone explain to me how his fake a** was okay with everything, like it took him ZERO time to get used to Isabel going back to Caleb and having sex with him (again... and again...), and Isabel giving birth to a Caleb baby and a Logan baby. Yikes.

Finally, this book could have been condensed into, like, 50 pages. Not much happens. The author should have skipped all the fluff and the panic attacks and the coddling and just jumped to the "choose me or me!" scene. She should have skipped the babies, too. Or made them both Logan's. Or made both Caleb's (somehow, I might have preferred that to one and one. Actually, I would have preferred no babies at all).

In hindsight, I was a dumba** for ever thinking I would like this series. Book one hooked me, book two was good because Isabel seemed to finally hate Caleb, but book three ruined everything (including books one and two).

Nope. I recommend absolutely none of these books in this series. I didn't even want to write this review because I was so irritated with this book. If you have no issues with polygamy and heteropaternal superfecundation, go for it. No judgment from me.

1 star. This is the third book in a row that has received two stars or less from me... someone please point me in the direction of something good. This book was sickening and just awful. I have a paperback copy of each of the books in this series, so if anyone is interested, please let me know. I want them out of my house!