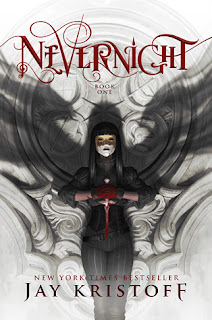 In a land where three suns almost never set, a fledgling killer joins a school of assassins, seeking vengeance against the powers who destroyed her family.

Daughter of an executed traitor, Mia Corvere is barely able to escape her father’s failed rebellion with her life. Alone and friendless, she hides in a city built from the bones of a dead god, hunted by the Senate and her father’s former comrades. But her gift for speaking with the shadows leads her to the door of a retired killer, and a future she never imagined.

Now, Mia is apprenticed to the deadliest flock of assassins in the entire Republic—the Red Church. If she bests her fellow students in contests of steel, poison and the subtle arts, she’ll be inducted among the Blades of the Lady of Blessed Murder, and one step closer to the vengeance she desires. But a killer is loose within the Church’s halls, the bloody secrets of Mia’s past return to haunt her, and a plot to bring down the entire congregation is unfolding in the shadows she so loves.

Will she even survive to initiation, let alone have her revenge?

I'm going to be completely honest - when I first started reading this book, I struggled with it. I had been so excited to read it for months, and I'd finally gotten a review copy earlier in the year, and I'd been tearing through my summer review books in eagerness to get to this one. And then the time came, and I started reading... and barely made it past chapter one. I don't know what it was. The story was okay, but not boring (at least from the first chapter). I still desperately wanted to read the book. But something was off, and I struggled to get past chapter one. I read several adult romance novels in the interim, a few YA books, and finally, I returned to this book, and tried again. And promptly read it from start to finish in a few hours. I don't know what held me back initially (maybe my mood?), but it didn't bother me the second time around!

Mia's family was brutally taken from her by the Senate years ago, and she has been bent on vengeance ever since. She has been trained by a man named Mercurio to become an assassin, and the time has come to join the Red Church, to become a Blade of the Lady of Blessed Murder. She and about thirty other acolytes learn and fight and compete to become a Blade - only four will be granted the title and role. But there is a traitor in the midst, a killer who has no mercy on acolytes. And the killer has a greater motive than killing acolytes, one that goes beyond achieving the title of Blade.

First and foremost: this book is not a YA book, or an NA book. People, PLEASE do not make the mistake of thinking that this is one of Kristoff's YA books. It's not. There are very explicit sex scenes (scenes I'm used to reading in steamy adult romance novels - you know how much I love my romance novels), graphic violence, lots of profanity... none of which surprise me in an adult novel (whether it's adult romance, adult contemporary, adult sci-fi, etc.). I might expect cunnilingus in an adult novel. But not explicitly so, in a YA novel. The author and publisher are marketing this is as an adult novel.

So, ADULT STORY, PEEPS. If you're not comfortable with some very detailed sex scenes, or some graphic violence, or a ton of profanity, maybe this isn't for you. Yes, Mia is sixteen. That does NOT make this book a "YA" novel or an "NA". No way. Check out the price of the hardcover - it's $25.99 (USD). No Young Adult novel in the history of Young Adult novels has ever been that expensive (usually a YA hardcover is $17.99-$18.99). ADULT BOOK, EVERYONE.

Phew. Now that we have that out of the way... I really liked this book! It's my first solo Kristoff read, and I was quite pleased. I already talked about how I struggled to read past chapter one, but I don't think that was any fault of Kristoff's. When I tried again, I couldn't stop reading. Each chapter got more twisted and intriguing, especially once Mia (and Tric) arrive at the Red Church.

The brutal training school setting is nothing new to fiction, but I absolutely love these types of stories. This one reminded me a little of An Ember in the Ashes (yes, I know, that one is a YA book). The training at Red Church is murderous (not even exaggerating), brutal, physically and mentally demanding. Imagine all of your instructors trying to kill you, whether by sword, or poison, or ingestion or inhalation of vapors... yup, these assassins are no joke.

Mia has been hardened by a terrible and heartbreaking past. Her father was hanged as a traitor when she was ten. Her mother and baby brother were taken from her shortly after. She was facing the end of her life then, when she struck back and found a way to survive. Mercurio found her, took her in, and began to train her to become an assassin, to join Red Church.

Mia is so strong and so fierce, in an intense way. She has a gift/curse that few have - she can control and speak with shadows. At Red Church, she gets no special treatment though. Mia wields her power (the shadow power and her physical power) well. She's sixteen and sometimes makes not-so-great decisions, but Mia is very smart. In fact, by the end of the book, she seemed to have gotten cleverer and cleverer. Though not as cold and bloodthirsty as she thought herself to be. I like her a lot!

The secondary protagonist is Tric, another acolyte whom Mia meets before finding Red Church. Both of them were trying to find the Maw, and so they wander in a ghost town to find it, together. At the Church, their kinship remains, and they watch each other's back. I underestimated Tric; I thought he seemed a little goofy and weak, but he isn't. He is a very good acolyte and assassin-in-training. He wrestles with his own demons from the past, and I felt for him all the time. I liked him too!

I like how Kristoff tells the story. We do not get everything from Mia's past all at once. The reveal is slow, throughout the book, which may be a bit confusing at first. We don't get Tric's whole story all at once either. Kristoff subtly weaves in backstory, present story, and foreshadowing, and it is masterful.

I've already mentioned the setting of Red Church (the training school type of setting), and I should mention that this is an adult fantasy novel. You could guess the fantasy part, since we're talking about assassins and a Republic and Senate and whatnot. Oh, and Mia being able to command shadows. I love the world that Kristoff has created, though I'm terrified of it!

There are plenty of secondary characters besides Tric that I really liked (and some I hated, with good reason), though I won't bore you with the details. I must say, I never underestimated Hush, and with good reason. Same with one of the girls. Nope, I saw that coming.

The climax of the book was something I saw coming, and that's either because of slightly too-good foreshadowing, or reader astuteness. I like how Kristoff brought it about, like a puzzle coming together. It was exciting and terrifying and one part shocked me, because it seemed to come out of nowhere.

Now would be a good time to mention the romance... I liked Mia and Tric together. When they first meet, there is a lot of sarcasm exchanged, and some banter. As their friendship continues, they get to know each other better, and rely on each other more. And then their relationship turns into more. Did I already mention the explicit sex in this book? Good. I'll have you know that there is no love triangle in this book. I'm not sure what to expect in book two, because Mia and Tric's relationship isn't all rainbows and sunshine. But I'm hoping for certain things to happen. Or one certain thing, specifically.

Overall, I liked this book. It's intense, intriguing, sexy, and a little horrifying at times, but without doubt extremely enjoyable. Oh, and Kristoff leaves us with a nice big cliffhanger at the end, so I guess I should compliment him for making me crave book two right this very moment... sigh.

A few things. Maybe it was the book/Kristoff, maybe it was me, but I already mentioned how I struggled to get into this book, the first time I tried to read it. I was supposed to review this book in mid-June (and I picked it up and tried reading at that time), and it's now almost mid-July. So.

There is a part of the romance's plot that makes me a little anxious! Those who have read the book know what I'm talking about. I don't want to say anything more, for fear of spoilers, but know that it's nothing love-triangle-y. I'm not sure how to feel about the aspect though!

For those who like ADULT fantasy novels... yes! I would recommend this book. There is nothing controversial or debate-sparking about this book, if you know that it's an adult novel. It's adult, people. Nothing controversial about explicit sex and violence and profanity in an adult book (trust me, I know). Ever read Game of Thrones? Or books by Guy Gavriel Kay? Lots of explicit content in those. And they're not considered controversial. Just because Kristoff has written YA books in the past doesn't mean that this book is YA (because it's not!). So, I recommend this book to people who read adult novels and like adult fantasy.

4.5 stars -> rounded down to 4 stars. For reasons I'm not stating specifically in this review. You'll have to find out and decide for yourself. But I really liked the book and cannot wait to read the next one! It needs to be here now. Perhaps binge-reading this series might have been a good idea! No regrets though.