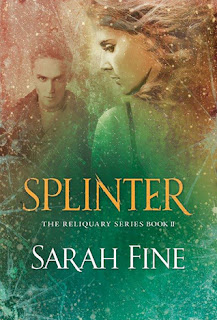 Mattie Carver has relinquished the world of magic, with all its dark temptations. In six weeks, she’ll marry Ben Ward and claim the safe, small-town life she craves. But Mattie’s talents as a reliquary—someone able to smuggle magic within her body—make her a valuable commodity, even to those she trusts the most. Forced out of retirement by a painful betrayal, she must seek the help of the man she’s tried desperately to stay away from: Ben’s estranged brother, Asa.

Asa, a sensor and magic dealer, may have saved Ben months ago, but he’s complicated Mattie’s life beyond imagining. Trailed by lethal mobsters through Chicago’s seamy magical underbelly and an eerie traveling carnival, Mattie struggles to endure the priceless magic she’s holding and her feelings for Asa. Once, she thought she’d chosen her path. Now the only option may be to succumb to the destiny that’s choosing her, and hope she’s strong enough to survive.

I didn't like Reliquary as much as I'd hoped, which is pretty surprising, if you know me and/or have followed my blog for some time. I've read twelve of Fine's thirteen published books (the only one not read being Burn - which I have!). I'm a huge fan of Sarah Fine and her books, so I was so disappointed when I read Reliquary - more so because I didn't like the book (not just that the book wasn't good).

That being said, I am pleased to let you all know that I liked Splinter A LOT more than I liked Reliquary. The issues I had in book one were present but no longer issues to me. I liked Mattie more, I hated Ben more (which is good!), and I liked the direction and progression of the romance more. I am NOT giving Splinter a more positive rating because I felt bad about giving Reliquary a not-so-great rating. Absolutely not - I refuse to feel bad for not liking that book as much as I usually like Fine's books. Splinter was better than Reliquary, and much nicer to read.

Splinter begins months after the end of Reliquary. Mattie and Asa parted ways, in which Asa disappeared, and Mattie went back to Ben. But it's been months since Mattie's been healthy. She's been sick, physically and emotionally, and no one can figure out what is wrong with her. Is it magic? Is it her heart, trying to tell her something? Her relationship with Ben just isn't the same, despite continuing to plan a wedding that will happen in six weeks. But when Ben makes a dangerous decision that forces Mattie back into the magic world - back to Asa - Mattie will have to open her eyes and decide for herself what she wants to do with her future.

I have to look at Mattie in a different light, after reading this book. She seemed a little... weak? In book one. I didn't like that she hid when things got too difficult, and that she refused to make big decisions. She's not a control freak but she does like to have control, and yet, she proved herself incapable of making certain decisions, in book one. I like that, in this book, Mattie fully realizes and recognizes this flaw of hers. She begins to really understand just how much she hides, takes cover, pretends, avoids, and ignores. In this regard, Sarah Fine wrote Mattie's character development beautifully. Yes, Mattie likes to pretend that everything is okay. Yes, it's annoying and painful to read. But yes, it's something human and very real. I dislike Mattie's indecision (on SO many things), but I understand her better.

That being said, this book dealt less with a Mattie/Asa connection dynamic, and more with a Mattie-discovering-herself type of angle. Don't get me wrong, Mattie/Asa is a huge part of this book, their relationship ever shifting and developing, pushing and pulling. But I like that the author writes this story in a way that Mattie really sees herself and her current state of affairs. By the end of the book, I was finally on board with Mattie and her life choices.

Asa, oh Asa. If I wanted to give him a hug after Reliquary, I really wanted to hug him after this book. My heart broke for him in so many scenes. Ben is with Mattie in this book, as they run from various mobsters in the magic world, and so Asa has to see Ben with Mattie. I mentioned that Mattie and Ben's relationship is not in good shape - but Ben is constantly trying to get Mattie to forgive him, and Mattie is indecisive and too trusting, as always. So I felt so bad for Asa, even if Mattie and Ben weren't being physical or lovey-dovey with each other. Asa is so selfless and never makes demands of Mattie. He's moody at times, but he always wants to what he can to make her happy, even if it's walking away or shutting her out. That is so selfless, as Asa is throughout the whole book.

I might as well talk about the romance... I'm more happy with it, in this book. Fine kind of turns Ben into a crazy person, though a sane crazy person. Ben thinks he is doing the right thing for him/Mattie, but he ends up doing one terrible thing after the other. Good intentions, bad results. Mattie is so in denial for a good 75% of this book, not wanting to believe that Ben has hurt her. Ben created so much pain in her life... he needed to go.

Asa, on the other hand, is stubborn, angry at times, grumpy, and charming, and selfless. You can tell at the beginning of this book that he doesn't want to want Mattie like he does, but he never stopped. He lets Mattie be, despite hating that she is with Ben. I like that Asa doesn't force Mattie to make a decision about anything, despite how much it frustrates him (I'm talking about the magic world, relics, and yes, their relationship).

Mattie and Asa are the better couple, especially after how toxic Ben was, in this book. The steamy scenes are pretty much at a minimum in this book, but I suppose that's good, because Mattie and Ben are still planning a wedding in this book. A somewhat spoilery note - the pair really lose their way. They're planning a wedding but haven't had sex since Reliquary (i.e. for months). I honestly could not wait to see Ben get shot or fall off a cliff (neither of those two things happen).

In terms of the story, I could not read fast enough! Seriously, I finished this book really quickly. There was a lot of action and high stakes, with Asa being a constantly wanted guy, and Mattie on the move with dangerous things. Mattie was sick for most of the book and you'd think that would slow down the story, but it didn't!

Overall, I'm very, very pleased with this book. It was much better than Reliquary for me, and I'm glad I decided to keep going with the series.

I think this is a huge part of the series, part of the story, part of Mattie's journey, but I still hate it: I hate that certain things are done to certain characters that they have no control over. This story's world deals with four types of magic, and having or wielding that magic gives you control over a person in a certain way (like pain, or lust). In Reliquary, Ben used a lust stone to get himself off, and get Mattie aroused (how. is. this. OKAY WITH HER. See? She's pretending. She's avoiding. It's not okay!). The loss of control happens in this book, though it's not too bad... still it, made me uncomfortable.

If you were like me, and didn't really enjoy Reliquary, I still recommend giving Splinter a chance. Sarah Fine has never let me down and I had a feeling that I would enjoy the rest of the series more than Reliquary by itself. And my gut feeling was right! This is a heavily adult series, despite the lack of steamy times. There is other VERY visualized content. And beware, there is a weird somewhat-love-triangle in this series (which was most of the reason why I hated Reliquary), but it's pretty much gone in this book. Within the first two or three chapters, that was obvious.

4.5 stars -> rounded down to 4 stars. MUCH better. I felt bad for not liking Reliquary, and so I had high expectations before reading Splinter. Even with those high expectations, I really enjoyed this book! This is definitely not a pity rating (I don't do those). I'm hoping for more Mattie/Asa and more steamy times in Mosaic. We shall see!