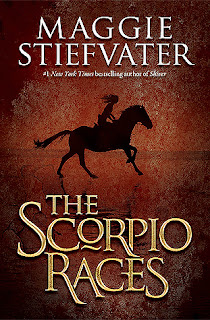 It happens at the start of every November: the Scorpio Races. Riders attempt to keep hold of their water horses long enough to make it to the finish line. Some riders live. Others die.

At age nineteen, Sean Kendrick is the returning champion. He is a young man of few words, and if he has any fears, he keeps them buried deep, where no one else can see them.

Puck Connolly is different. She never meant to ride in the Scorpio Races. But fate hasn’t given her much of a chance. So she enters the competition — the first girl ever to do so. She is in no way prepared for what is going to happen.

I've had this book on my TBR for a long time, but never pushed myself to read it. A loooong time ago, I read Shiver and Linger by this author, but didn't like Linger so I never finished the series. I haven't read her Raven Cycle series either, though I do want to binge-read that series in the future. The Scorpio Races seemed like a good place to try again, since it's a standalone, and my good friend Pili read it recently and liked it a lot. So, I'm counting this as my July Pili-Pushed novel!

The Scorpio Races happen on the island every year. Every year, riders choose a water horse, train for a month, and race. Puck Connolly lives with her older brother and younger brother, getting by meagerly. When Gabe (her older brother) tells them he's leaving the island, Puck decides to enter the Races, something no female has ever done. Sean Kendrick has won the Races four times. But winning isn't what he cares about - he loves the ocean and the horse he rides, Corr. But both he and Corr are owned and have no freedom. Freedom is what Sean wants, and this year's Races might be the way to get it.

This book is told in alternating first-person POVs, so we get to experience both Sean and Puck's thoughts and feelings. I liked both perspectives a lot, which doesn't typically happen with me! Another thing that I liked about the narrative was the length of the chapters - the chapters were fairly short. Usually you find fifteen to twenty page chapters in YA books? These chapters were three or four pages long, most of the time. Which I thought was very different and cool!

I liked Puck - or Kate, though she prefers Puck. She's learned to take care of herself and her brothers long ago, after her parents were killed by the ferocious water horses. When Puck enters herself in the Races, she enters her horse, Dove, who isn't a water horse. There are so many complexities to Puck that I liked discovering and figuring out.

If Puck was complex, then Sean was a maze of intricacies. Sean is a man of few (no) words, and yet his presence is enormous. He's a four-time Champion, but he's also something of a water horse whisperer. No one can train the beasts and keep them under control like Sean. Sean works for Malvern's stables, who practically owns him. Sean seems to only have one weakness - Corr, the blood-red stallion that is Malvern's, that Benjamin Malvern lets Sean ride every year.

The pair meet after Puck decides to ride in the Races. Many people of the island do not want Puck anywhere near the Races. It is Sean that sways the people to let her sign up, and Sean that gives her tips about the Races, and Sean that helps her and her horse train.

In a way, this book was completely about the Races, and yet not about the Races at all. It's about Puck's growth from a directionless girl to a stubborn rider who fights for what she wants. It's about Sean's fight for his freedom and his horse, both of which are more important to him than the Races. Sean's journey was more interesting to me, and more heartbreaking.

Sean is the brooding, mysterious boy that everyone is curious about, that everyone loves and everyone stares at. He's the one that everyone knows and is in awe of. Puck is the girl that no one wants in the Races, the poor girl whose house is about to be taken away. I love this story of two unlikely characters finding their way.

So there is romance, a subtle and barely-there type. This book takes place over the course of a month or so, but it doesn't feel that way (it feels like days). It felt like Puck and Sean barely knew each other, but they trained together a lot, and days blurred together. I liked seeing the subtle romance, though it felt a little too barely-there at times.

The Races themselves happened in the last twenty pages or so, so it felt like it was over before it began. But like I said, the Races were both everything and nothing in this story. The Races were short but heart-stopping, and the outcome was both unsurprising and shocking.

Overall, I liked the book. I do have some complaints, but I can see the appeal of this book. Books centered around horses typically aren't my thing, but I enjoyed this one!

I kept hearing about the beautiful romance in this book, and so I think I had pretty high expectations... the romance is subtle and slow-moving, and it's barely there... I guess I was expecting fireworks? So I was a tiny bit disappointed. But hey, those were my high expectations, not the book/author's fault.

The pacing of this book is soooooooo slow. Like, incredibly so. The first one hundred pages of this book were so so so boring. The writing of this book is great but it really adds to the slowness in the beginning. Once I started getting into the Puck/Sean interactions, I started to get more invested in the story. But this book moves very slowly, in pacing.

In terms of actual time, it's very deceptive. I think at least a month passes, but it honestly felt like a week or two. I don't think the author did the best job of conveying the passing of time. But that could be just me!

If you've been a part of the YA world of literature, I'm sure you've heard of this book, or at the very least, this author. I can see why people love this book, and why there is so much hype surrounding the author. I did like this book and I would recommend the book if you're like me and had been wanting to read it - it's worth it, if you were already curious!

But if you weren't really curious... meh. To me, it was magical and life-changing like I expected. Part of me expected epic action (I saw somewhere that someone compared this book to The Hunger Games? HOW?!), and while I wasn't disappointed that there wasn't any, I wasn't particularly thrilled with the really slow pace of the book. Again, this wasn't magical and life-changing for me. It was good, but not amaaaazing.

3.5 stars -> rounded up to 4 stars. I enjoyed this book and am glad I finally made myself read it! It was worth sating my curiosity. I can't see myself rereading it for any reason, or singing its praises from the rooftops, but I do see why so many people flipped out (in a good way!) over how awesome they thought the book was.