Review: The Beauty of Darkness by Mary E. Pearson 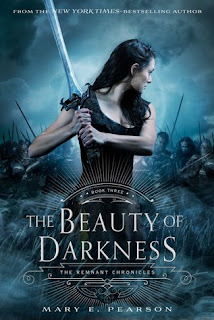 ***NO DIRECT SPOILERS, BUT THERE ARE VAGUE NOTES AND SUCH. READ AT YOUR OWN RISK. POTENTIAL INSINUATION-TYPE SPOILERS.***

Lia and Rafe have escaped Venda and the path before them is winding and dangerous - what will happen now? This third and final book in The Remnant Chronicles is not to be missed.

I'm writing this review in lists, people. Usually I do this in paragraphs but I am too infuriated and frustrated by this book write now. This section is my "What I Liked" section, otherwise known as the reasons-why-I'm-not-giving-this-book-zero-stars, in this case.

- Technically, the ending IS a HEA. You'll see below my full thoughts on the ending. But technically, technically, we have a HEA. Lia, Rafe, Kaden, Pauline, and other major characters get a happy ending. I liked Rafe's ending, though I wished for more for him.

- The love triangle is gone - ish? It is. But then, the romance is pretty much gone in general, so there's that. More on that below.

- Lia is a complete and utter b***h in this book. Honestly, I don't know how I liked her in the previous two books. She certainly wasn't this bad in those books, I can tell you that. Lia turns into this raging crazy person. I think Pearson wanted to make Lia seem "bada**" and commanding and alpha female or whatever. It came across as CRAZY. And rude. And hurtful. For about 75% of the book, Lia is HORRIBLE to Rafe. And then in the last 25% of the book, she's horrible to him in a different way, more subtle. She literally does nothing to fight for their relationship.

Let me stay on this topic for a little bit. Lia treats Rafe so badly in the first 75% of the book. It's like she isn't grateful for him saving her life... over... and over... and over. She uses him, and she makes demands and expects him to do all of these things when SHE KNOWS he has duties in this or that.

Did I mention that she doesn't fight for their relationship? It's like she loves him but doesn't care enough to fight for the relationship, when things get tough. HE fights for them, but not her. You know why, partly? Her "gift" tells her to do this, or do that. The magical book of Venda that she has with her has all of these fancy prophecies, and Lia is trying to follow them down to the T.

Honestly, I have a lot of disdain for prophecies, and protagonists that put so much stock into them. Lia has no regard for her own destiny. For a girl that tried to escape her fate by running away from her wedding, Lia is quick to jump right back into letting someone (i.e. the book of Venda, and her "gift") control her.

- Obviously I hated the romance. The love triangle is gone, thank goodness. But Rafe and Lia still aren't in a good place, and it's mostly Lia's fault. Rafe is under so much pressure and stress, as a new king (yup, he's the king of Dalbreck now), and it's like Lia doesn't care, or doesn't understand, or both. The romance in this book is AWFUL. I do not recommend reading this book if you expect swooooon. Because it never happens. Lia is cruel to Rafe, and Rafe has to do certain things within his duty as king, and honestly he deserves so much better than her. She wants to be Queen of Venda? By all means. But it's too bad that Rafe loves her so blindly.

In that regard, I dislike Rafe. He loves Lia SO blindly. Rafe is my favorite character and I really felt for him in this book - having to step into the role of king so suddenly - but ugh. Love is so blind.

- I didn't like Kaden, but even I thought his end of the romance deal was poor. It's like the author wanted to force a romantic plot for Kaden. It felt fake and totally forced and not genuine. There was potential for a good hate-to-love relationship. But the author doesn't write it well.

- BORING. This book, especially the first, like, 40%, was SO incredibly boring. WHY is this book nearly 700 pages long?! It could easily be like, 400 pages, and still would need cutting down. So many unnecessary pages in the beginning of the book - especially since BARELY ANYTHING HAPPENS, except Lia whining, complaining, and being a super-b***h.

- I got to a certain point where I literally dreaded continuing. That point occurred well before the 60% mark, but I stopped reading the book at the 60% mark and didn't pick it up for almost a week. I dreaded picking it back up. There were so many things that were happening that were especially awful, ridiculous, and stupid. Look, I try to separate my intense emotions from my objective opinion of the book, but when you're feeling dread at the thought of picking up a book, and your stomach hurts just thinking about it... there is something very wrong with the book.

- This brand of "girl power" was so bad. I already touched on this, but I didn't like what Lia evolved into, in this story. She's such a b***h! Making demands to everyone, like she owns everything. Especially in DALBRECK, to the DALBRECK KING -- no. Let me explain something: you want to write a medieval-type fantasy novel? You can't have a Princess of X trying to command people/soldiers/royalty in the Kingdom of Y. That just doesn't happen. Lia needed to learn her place, but she is so tunnel-visioned by her "gift". Suddenly she's infinitely smarter and better than everyone because she has a "gift"? That's what it seemed like, in this book.

I think the author was going for bada**ery but it was an epic fail, at least in my opinion. I hated Lia for, let's see, ALL OF THIS BOOK. I was no longer rooting for after, hmm, chapter one. Look, I'm all for feminism, but in no story would I like a heroine like Lia (at least, what she is, in this third book).

- The ending, in terms of the romance. It is SUPER open-ended. This book is in serious need of an epilogue. It's not open-ended in a triangular way, but it's abrupt and open-ended.

- The ending in general. In terms of kingdoms and wars and whatnot, the ending wraps up. But it's so abrupt. The Great Big Battle occurs after the 90% mark, and it's so abrupt. And cliche/unsurprising... there are no elements of originality in that last battle scene.

- The speech that Lia gave that stopped and saved everything (at the Great Big Battle). You want to know how the fighting stopped? Lia suddenly developed magical oration powers and captured all of the bloodthirsty solders' attention with her speech. "Brothers, sister!" Yeah NO. That would not have worked on me. In the heat of a battle, I would not give one flying f**k who is getting on whatever podium or rock or hill and starts giving some empowering "let's work together" speech. Ummm, no. That b***h would get an arrow straight through her.

- The presence of the supernatural is SO deus ex machina. I feel like the author used the supernatural "gift" that Lia has to explain way too many things. Feelings, visions memories - okay, maybe. But it just did not seem believable. You cannot explain away EVERY single event with the "gift". You can't have the plot moving because Lia heard a whisper that they should do this, or that. Literally every single one of Lia's decisions are made because of her "gift", and she expects everyone to follow her blindly. Look, I'm all for divine/supernatural powers, but you really can't have your main character so dependent on them. Especially those prophecies -- well, you already read my opinion on prophecies.

- The writing was kind of awful. Seriously, what even happened to this book?! The first two books were really intriguing and engrossing and I liked them so much. This book seemed rushed and poorly written, like maybe it was outlined very well but written with difficulty. Or something. I don't know. All I know is that it was a MESS.

I do not recommend this book. Even if you've read books one and two, just stop there. I know that if I were reading this review, I would be like psssshhhh, is it really that bad, I'm going to read it anyway! (I was a HUGE fan of books one and two, despite the love triangle.) And there will be many people that will read this book anyway. But I'm here to say that I do not recommend that decision.

Or, try borrowing this from the library. Maybe don't sink $20 on a book that might end up being 700 pages of agony and fury and irritation. Trust me, I do not know what happened to this book, but the author really dropped the ball here.

And if you haven't started the series at all... maybe don't. Skip it. Overall, it's not THAT good, or original. I can list plenty of better YA medieval fantasy stories, just ask! Honestly, after reading this book, I'm questioning why/how I even liked this series in the first place. My memories of books one and two are replaced by all this rage I have for book three!

1.5 stars. I really wish I hadn't ever read this series. I rarely say that but yup, I'm saying it. I'm sorry to the author, publisher, publicists, etc. I'm grateful for the review copy, as always, but I did not enjoy this book. But I will always be honest. If there is one thing I've learned, it's to never hide your negative opinion of a book behind your initial/previous excitement for it. I wish all readers who attempt this book the very best.