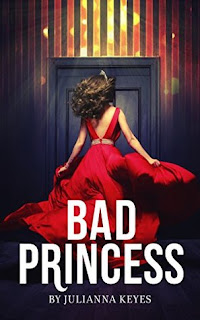 Bad Princess is the seventh story of Julianna Keyes' that I have read. Since reading Time Served (one of her adult romances), I've yet to be disappointed. While I think her best adult and New Adult novels were Time Served and Undecided, Bad Princess is a fun, sexy novella that I enjoyed immensely. It is a departure from her other works but it has the same emotional depth and heat factor that one might begin to expect from her stories.

This novella starts with Princess Brinley's older sister Elle already having abdicated the throne. Rumor has it that she ran off with a sexy lumberjack to an unnamed island in the South Pacific. So, our story starts with Brinley and her parents (king and queen) having a meeting with King Edric of the neighboring country, and his second son Finian. Then comes a compromising set of photos and... Finn and Brinley find themselves married. Brinley has been in love with Finn since she was five years old, but she knew he was meant for her older sister. Now they're married and she wants nothing more than for him to want her for her, and not for duty or treaties or honor. The proper, golden-boy prince and the bad princess - who would have thought?

Brinley is such a fun character to follow and an easy one to like. This entire novella is written from her POV (which at first I found sad, because I sooo wanted Finn's POV too). Brinley likes to live life on her terms, and doesn't care for the stuffy, boring lifestyle that her sister lives - Finn as well. Her sister abdicating the throne is quite possibly the worst thing to happen to Brinley. Now she is confined to being the next queen - and marrying her sister's intended.

Finn is proper and stoic and full of honor and duty, the golden boy and the "good prince", a perfect opposite of Brinley. He seems boring and not lively, but he has so many adoring fans. Everyone loves his perfection and his no-nonsense non-rule-breaking ways, so unlike Brinley. I liked Finn despite his stuffiness, because all of the granite exterior had to crack at some point.

These two have serious chemistry! You would think, with this story being a novella's length, that the chemistry would be rushed and the romance would be clobbered together, or something like that. But no, the chemistry and the tension were built up and made for some very steamy times. His Royal Stuffiness is really not so stuffy in some ways... as Brinley finds out.

The romance was cute too. Finn was always careful and considerate of Brinley, and Brinley, well, she had always loved him, but she wanted him to want her for her. These two navigate life as a married couple with as many obstacles as one might expect from a couple pushed together via arranged marriage. They were cute to watch though.

A note about the setting - this book is set during modern times, but of course it deals heavily with royalty. Think Prince William and Princess Kate, but with the royalty actually being the government, and not figureheads.

All in all, this was a great novella with a very happy ending. Of course, as with all novellas, I wish there was more, but this story felt complete and satisfying on its own.

Nothing specific! This is a quick, fun read. The only thing that might have made this better was dual POV featuring Finn, but the story was just fine with only Brinley's first-person POV.

Usually I'm not one for contemporary stories involving royalty as a protagonist (or both protagonists) - I like fantasy involving royalty just fine though - but Bad Princess was definitely a great read for me! A fun heroine, brooding hero, sweet romance, sexy sexy chemistry... there is a lot to love about this story. And it's a novella so it's a quick, satisfying read!

4 stars. I have yet to be disappointed by Keyes' stories and I hope that won't change! I know this is a standalone novella but it would be so cool to see more from this couple or from this world. In any case, I'm always looking forward to reading more by this author!