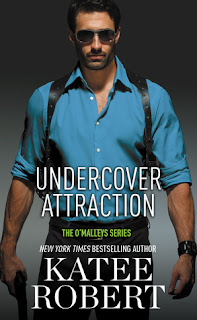 I've read the previous four books in this series, and I've always been curious about Aiden from the start. Who is this cold, hardened man? Is he truly so cold? We discover his limits in Undercover Attraction, the continuation to the series, featuring Aiden and Charlie. I enjoyed this book on its own and I loved it as a sequel to the previous books. Katee Robert has done an excellent job in continuing the series so far, and I'm desperate for The Bastard's Bargain.

In this book, Aiden is tightening his reign as the O'Malley head and simultaneously struggling to hold ground against Dmitri Romanov - and a new family in play, the Eldridges. He needs to keep his friends close and his enemies closer, and that's where Charlotte Finch - now Charlie Moreaux - comes in. The plan: they'll pretend they're engaged, to distract Aiden's enemies. Then, he'll eliminate them. But he doesn't plan on falling for Charlie - or vice versa. Now both Aiden and Charlie have so much more to lose, and with players in this dangerous game, they will stand to lose it all.

I love the fake engagement trope! Especially when it involves two people who clearly do not want to be engaged. Fake engagements are great because the main couple is locked in and must interact - and there are rarely love triangles. (I hate love triangles.)

Aiden has always been somewhat of an enigma, throughout this series. He seems cold and closed-off, like Seamus O'Malley 2.0. But the truth is, he isn't like his father. He puts his family first, and does everything for the good of his family. Sadly, this costs Aiden individual relationships with his siblings, which is heartbreaking to watch. Aiden is isolated within his family, but he is a fair and hardened leader with an iron will. He emanates power and intensity, which I rather liked. He isn't a cold-hearted killer like he has everyone believe him to be, but he is dangerous.

Charlie is a tough woman who knows how to take care of herself. She used to be a cop, and now she is lying low after some rocky events in her past. She agrees to help Aiden and play his fiancee, but she never expects to actually fall for Aiden, or like his family (especially Keira). Charlie has a strong will but she isn't aggressive and "loud" in terms of her personality and will. She is smart and headstrong, and she knows her mind.

I found Aiden and Charlie to be a good match. Aiden is intense and alpha-y, and Charlie is assertive and kind. She isn't the fawning, sweet type, but she is very considerate and cognizant of Aiden's moods. I love how quickly she starts to read him, and he her. They fill each other's spaces and it becomes clear that they needed each other.

It doesn't hurt that they have great chemistry, from the start. Aiden is definitely more on the dominant side and Charlie likes it. There is a little bit of tug-of-war between these two, and that always results in some pretty steamy scenes. Of course, Robert is so good at writing creative steamy scenes, no matter how many books she has written!

The plot thickens, in terms of the O'Malley war with literally everyone else! But one neat thing is that the O'Malleys, Sheridans, Hallorans, and Romanovs are all a significant part of this book. It isn't just about Aiden, and Charlie. All of the O'Malley siblings (except Sloan) come out to play. With that new family coming in as a threat, and no one really knowing where Dmitri Romanov stands, it's all man for himself, except when there are fake alliances. Things really shake down to the sixth book!

I wll say that the ending of this book is a HEA for Aiden and Charlie. The book ends very well in that regard. In terms of the families/mobs/war/marriages/etc.? This series is not over yet. I love that each book can be read as a standalone BUT there is a lot that ties the series together, including the ongoing war between families. But everything is going to explode in book six and I can't wait!

There wasn't anything that I really disliked, per se, but I wouldn't rank this book among my favorites of all time (which is what I save the five-star ratings for). I liked this book a lot but looking at the series as a whole, it wouldn't be among my favorites. Books two, three, and five are somewhat forgettable for me, unfortunately. But I loved books one and four, and likely six!

If you've read any of the books in the series, definitely keep going! Or stop from the beginning. This dark romantic crime series is so, so good. Super hot, very intriguing, and always impressive. I don't usually read a ton of romance novels dealing with crime and mob families and such, but I think Robert is doing a great job with the series so far!