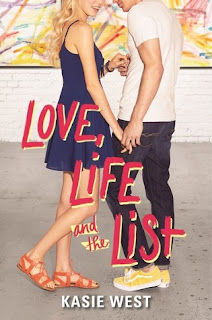 Everyone knows Abby Turner is in love with her best friend, Cooper Wells. Including Cooper Wells. But despite what people tell her, it doesn’t affect their friendship. And she’s practically over it, anyway. What she really can’t get over is when her boss at the local museum tells her that her paintings lack heart.

Art is Abby’s passion and she hopes her future as well. She is determined to change his mind and earn her way into the upcoming exhibit at the gallery. So along with her family’s help, she compiles “The Heart List,” a series of soulstretching experiences that are sure to make her a deeper person and better artist in six weeks or less. When Cooper decides to complete the list along with her, she realizes this list is expanding her heart in more ways than one. Maybe she needs to start another project.

Love, Life, and the List is about a girl who, in an effort to bring more emotional depth to her art, compiles a list of soul-stretching experiences to complete with her best friend—a boy she also happens to be in love with.

This is the first in a set of three standalone books with crossover characters.

I'd seen early reviews of this book and for some reason, I thought I wouldn't enjoy the book. I've read all of West's books. Her latest two books, By Your Side and Lucky in Love, were okay, but not my favorites. I missed the earlier stories like The Distance Between Us and The Fill-In Boyfriend. Personally, I thought Love, Life, and the List, was more like Kasie West's older stuff. It was sweet, thought-provoking, and very shippy.

Abby has the whole summer ahead of her, and she plans to work at the art museum, and hopefully ask the director to feature her paintings in an upcoming exhibit gallery for which she technically doesn't mean the requirements. But Mr. Wallace tells her that while her art is good, it lacks "heart". And so begins the Heart List, which includes ten things that Abby will try to do give her more experiences and depth. With the help of her best friend Cooper, who she has been in love with for years, she hopes to gain new experiences to be able to improve her painting, so she can paint five new paintings for the exhibit - if Mr. Wallace lets her feature her work. But in trying to expand her experiences, she also opens her heart.

This is probably West's longest novel, clocking in at 384 pages. It takes place over a summer between junior and senior year of high school. Abby is one fourth of a friend group, including herself, Cooper, Rachel, and Justin. Rachel is off to Europe with her family, and Justin is doing religious work in South America, and that leaves Abby and Cooper. This sounds great in theory, except a year ago, Abby declared her feelings for Cooper... and that wasn't well-received. So she played it off as a joke and a year later, they are still friends. But the more they hang out, trying to cross things off her Heart List, the more she feels herself falling for him (like she ever stopped to begin with).

Abby is driven by her desire to want her artwork showcased in the exhibit, despite her not meeting the age requirement. I liked seeing this drive in a Kasie West heroine - oftentimes, the heroines are kind of go-with-the-flow, not terrible driven. Not wrong with that, but it was nice to see things shaken up, even if Abby was laid back in various regards. I liked Abby; her determination to improve her painting was really respectable. Her persistence in getting her work showcased was admirable. And her ability to stay friends with the guy she has been in love with for forever - very remarkable.

Abby has the trademark sarcasm and wit that most West heroines have. She is hilarious and definitely someone I would get along with. I love her interactions with Cooper. Both of them are witty and funny, and their senses of humor mesh well. It's so clear that they are meant for each other! They make great friends but they care about each other so much, and they get along so well. I love seeing that kind of friendship but it's even more fun when that kind of friendship becomes more.

I suppose, in terms of the romance, you can kind of infer what happens here. There's unrequited love on Abby's part, as Cooper sort of shut her down a year ago, with everything he could have said but didn't. Abby wants to get over Cooper but he always had a hold on her heart. This was a bit heartbreaking to watch because I've so been there with a former best male friend, and I know how it hurts. Still, I found Cooper and Abby's friendship really fun and sweet, and to me it always seemed like they had great chemistry. I thought Cooper was fairly swoony! Even if he did have his mouth shut during the entire book, in terms of the romance.

I won't say more on the romance but I promise it's cute! It's very slow-burn and definitely worth the wait. I had a feeling things would work out as they did and I'm not complaining.

There isn't a ton of drama in this book, though there were times when I wasn't sure how the romance would end, or how the book would end in general. Trust me when I say that any "drama" in this book is very minimal and doesn't affect the romance.

As with most of West's books, there are some "tough issues" in this story that are important but don't bog down the story. Abby's mother deals with anxiety and it becomes a key point in the book, when Abby's mother does something that ends up making Abby really upset. I thought West wrote about the mental disorder well, and the resolution was good too.

I loved the ending! It's so sweet. Things work out for Abby, for the Heart List, for the paintings, for her relationship with her mother, father, and grandfather, for her friends. I have no complaints about the ending! I love a good HEA.

I really enjoyed this book and I definitely recommend it! I didn't have issues with it like some others might have. It's a sweet, swoony read and I breezed right through it so it's also a quick one. I was so relieved when I liked it because I didn't want to feel meh about yet another West book!

4 stars. My faith is restored! I absolutely cannot wait to read more by West, like Listen to Your Heart. I believe there will be books to follow this one (Love, Life, and the List) that feature crossover characters, so I'm excited about that! Hopefully Rachel, or Justin, or Lacey, or Elliott. Or some combination of them!