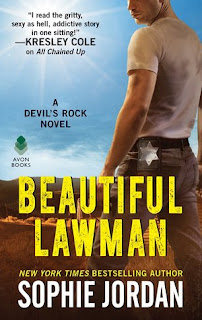 From the wrong side of the tracks and with most of her family in jail or dead, Piper Walsh is used to everyone in town thinking the worst about her. It doesn’t seem to matter that she’s worked hard to build a good life for herself. So she isn’t surprised that when she comes into contact with Sweet Hill’s wildly irresistible, arrogant sheriff, Hale Walters, they’re instant adversaries. Piper has nothing in common with the town golden-boy-turned-lawman—and she refuses to be a notch on his bedpost.

Despite rumors, Hale avoids fooling around with the women of Sweet Hill, many of whom are hoping to get him to the altar. But staying out of Piper’s path is proving near impossible. The infuriating troublemaker clearly has no respect for his badge. As she continues to push his buttons, it becomes clear to Hale that he must either arrest Piper—or claim her as his own.

I've been extremely excited about this book ever since I'd heard that Jordan was contracted to write more books in the series. I'd read the first three books and absolutely loved them, especially the third one, which introduced us to Piper. There is one single interaction between Piper and Hale in Fury on Fire, and it's hilarious because Piper dumps ice water all over Hale's lap at the club she works at. Beautiful Lawman is Hale and Piper's story and it does not disappoint.

Piper Walsh is used to having a certain reputation, thanks to other members of her family. No one will hire her, so she's stuck working the bar at a club - which she hates. She has never had to do anything other than serve drinks, but she needs more money if she is going to continue to support her fifteen-year-old sister and herself. Hale Walters is the town sheriff who seems to have it in for Piper. To him, Piper is a troublemaker who keeps popping up on his radar. Neither of them want to admit it at first, but there is a simmering attraction between. They might dance around each other and infuriate each other, but there's no denying their need for each other.

Friends, this was such a good romance story. Some tropes: enemies to lovers, damsel in distress (kind of?). I personally don't mind the damsel in distress trope at all - sometimes, a girl needs saving and a guy is perfect for the job. We can't always save ourselves, and even if we can, it's nice that someone else is there to do so.

And the enemies to lovers trope - definitely one of my favorites! There's something about the animosity and the bickering and the tension that is so fun to read. All of that negative passion becoming positively charged passion can be exciting. Jordan pulls that off perfectly, in this book!

Hale was kind of a jerk in Fury on Fire, but not in an unforgivable way. He was clearly looking out for his sister Faith, and I can't fault him for that. In this book, he still has his golden-boy, commanding demeanor, but we see a lot more to him than his looks and his authoritative figure. He's a genuinely good guy, even if he completely misjudged Piper.

Piper is a sweetheart! She seems prickly on the outside, but she has a soft, good heart. She would do anything for her little sister, and didn't hesitate to raise her, even though she's almost as young as her sister. Piper hates her job and hates what she might have to do eventually, but she is a hard worker and a tough girl. Slowly, Hale sees the rose behind the thorns.

These two together are incredibly satisfying to watch! They butt heads every time and it seems like they don't get along. What is it about Piper that frustrates Hale? What is it about Hale that Piper can't seem to shake? I love this kind of slow-burn, antagonistic romance. The chemistry is seriously scorching, and this is probably one of the hottest books in the series. Great tension, great build-up.

But I also liked watching them fall for each other. It was sweet, seeing Hale "rescue" Piper time and again. To me it was lovely because Piper was so used to doing everything by herself, and doing everything for her sister. She needed someone to look out for and care for her, and Hale was there. Hale needed someone to push his buttons and rattle him, and that was Piper.

There is very little drama to this book, even at the climax. I was so happy about this because drama can ruin a book. No love triangles, no past boyfriend/girlfriend issues, no cheating, no surprise pregnancies. Definitely my kind of romance novel!

The ending was excellent! Endings of romance novels usually are, but this one was especially so. It kind of hints at the fifth book? Which I'm excited about. I hope the fifth book will be about Cruz, Piper's older brother!

I guess I only wish that the book was longer! I loved Hale and Piper's dynamic.

5 stars. A rare 5 stars from me. Jordan's contemporary romance stories keep getting better and better. She really digs into her characters and brings out their flaws and their good qualities, and she masterfully pieces together the romance between the characters. I am so hoping there will be a fifth book about Cruz and some lucky lady!