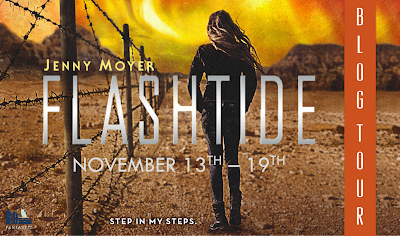 Welcome to the blog tour for Flashtide by Jenny Moyer! Today I've got Jenny herself, talking about writing sequels. Writers, this is good stuff! And for everyone, stick around for the giveaway at the bottom of the post. =)

On Writing a Sequel vs. Writing the First Book in a Series

FLASHTIDE is the sequel (and conclusion) to FLASHFALL, and it was really exciting to get to take these characters to new places—both physically and emotionally. When I first wrote Orion’s character, I was inspired by her resillience, and I think with this book, it was Dram’s capacity to endure so much darkness, and still find the light—that I wanted to explore. I took both characters to the edge in FLASHFALL, and in the sequel, I push them right over it . . .

Another aspect of writing the sequel was getting to explore entirely new settings, characters, and creatures! The book opens in the mountain provinces, where readers get to experience the Conjies—who can manipulate organic matter—and who are also rebels on the run from the Congress of Natural Humanity. Very quickly, the setting shifts (no spoilers) but I’ll just say that Orion finds herself in entirely new and uncertain circumstances. She is a stranger in a strange land, and I had a lot of fun playing with that as a writer.

On one hand, I found writing a sequel easier because I really knew my main characters, and had established the “world” of the book. I felt like I’d had a lot of time to think through the setting (which really motivates the characters in FLASHFALL,) and work out details of the various people groups, like Conjies and Gems, as well as the government. The biggest challenge writing FLASHTIDE was to make everything fresh and unpredictable, and to give Orion and Dram new character arcs. I found this a bit daunting at first, but it turned out being a labor of love. The characters surprised even me! They had depths (and weaknesses and vulnerabilites) and strengths I didn’t know about until I wrote FLASHTIDE.

There are always moments during the writing process when I’m stuck working on a plot problem, and wondering how I’m going to get my characters from one point to another. I came up with some pretty creative solutions for FLASHTIDE, and I think it will lead to some cool surprises for readers! I love how this reviewer puts it:

"Fans of the unique post-apocalyptic story will be riveted by the blistering pacing and unexpected twists. An intriguing follow-up." –Kirkus

I encourage readers who aren’t familiar with FLASHFALL to check out the book trailer. My husband is a filmmaker, and he did an amazing job. It gives people an exciting glimpse into the world and characters. 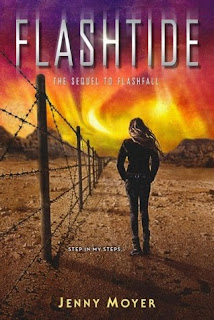 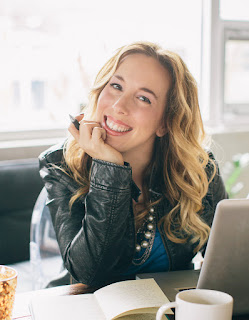 Jenny is the author of the YA sci-fi/fantasy FLASHFALL, and its sequel, FLASHTIDE. (Holt/Macmillan 11-14-17) She lives with her filmmaker husband and their three boys in Iowa. Watch the epic, live action book trailer for the novel that Booklist calls "A cinematic page-turner."