Review: Things I Should Have Known by Claire LaZebnik 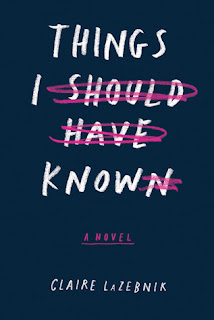 From the author of Epic Fail comes the story of Chloe Mitchell, a Los Angeles girl on a quest to find love for her autistic sister, Ivy. Ethan, from Ivy’s class, seems like the perfect match. It’s unfortunate that his older brother, David, is one of Chloe’s least favorite people, but Chloe can deal, especially when she realizes that David is just as devoted to Ethan as she is to Ivy.

Uncommonly honest and refreshingly funny, this is a story about sisterhood, autism, and first love. Chloe, Ivy, David, and Ethan, who form a quirky and lovable circle, will steal readers’ hearts and remind us all that it’s okay to be a different kind of normal.

Months ago, I received a galley of this book - it was sent unsolicited from Houghton Mifflin (and of course, receiving this galley in no way affected my opinion of the book). So I wasn't sure if I would read it, but recently, a few of my blogger pals read this book, and all of them really enjoyed the book. Throw in the fact that I really enjoyed the one LaZebnik book I've tried - The Last Best Kiss - and I knew I had to squeeze this one into my schedule somehow. I'm so glad I did, because it was a wonderful, thought-provoking, sweet story. With great diversity too!

At a glance, Chloe Mitchell has a great life; she is smart and gets really good grades, her boyfriend is hot, athletic, and a fairly nice guy, and she seems really social and has a great group of friends. But behind closed doors, everything isn't as put-together as it seems. Chloe doesn't have the best relationship with her stepfather, or her mother (since her father died and her mom got remarried). Chloe's older sister is autistic, and Chloe is very protective of and careful with her sister. Chloe's friends don't know much about Ivy, and Chloe sometimes feels as isolated as Ivy. Chloe knows how lonely Ivy is, and so she gets Ivy to start hanging out with Ethan, a boy in Ivy's classes. Ethan is autistic as well, and when Ivy and Ethan hang out, Chloe comes along, as well as Ethan's brother David. David is one of the most annoying jerks that Chloe knows, but as she hangs out with him (and Ivy and Ethan) more, she realizes that he is somewhat antisocial and alone all the time because his devotion to his brother is similar to hers with Ivy. But what if Ethan isn't the right person for Ivy? What is David is the right person for Chloe?

I don't really love or care for most YA contemporary novels that I come across - I'm much more of a fantasy girl, when it comes to YA. But certain YA contemporary authors have produced amazing books that really worked for me - like Kasie West, Emma Mills, Jenny Han, Huntley Fitzpatrick, Julie Buxbaum... I think it's safe for me to add Claire LaZebnik to that list. I'm two for two with books of hers that I've read!

Reading from Chloe's POV was so entertaining and interesting. I love how selfless Chloe is - she sacrifices a lot of time and social opportunities to take care of Ivy or meet Ivy's needs or demands. And yet, Chloe is also good about not giving into to all of Ivy's demands - she does a fairly good job of taking care of herself. Chloe is such a good sister, and a good friend and girlfriend too. I especially liked seeing her stand up for her sister to everyone - even their stepfather, of all people.

Ivy is a lovely character, one that I liked getting to know and learn about. I've had a lot of experience with young adults with autism, but I've never lived with someone with autism or had to spend hours and days with them. I think the author captured Ivy so well - not just Ivy with autism, but Ivy the person, Ivy the older sister, Ivy the lonely almost-twenty-one-year-old. Ivy is a secondary character in this book, but she is so important to the story.

David was a character that surprised me a little. He comes across as an antisocial jerk who gets good grades but is never seen with friends or a girl, so everyone thinks he is weird and unlikable. Even Chloe isn't nice to him at all, in the beginning. But I love how the author changes our minds about him; he stills seems a little antisocial and not a people-person, but we start to understand why. David is always with his autistic brother Ethan when they're not at their respective school, so David doesn't have much of a social life. His father and stepmother have no time or patience for Ethan, and David is all that Ethan has. David is incredibly selfless and such a good person, when you dig deeper. In fact, I'd say Chloe is more of a jerk than David is, in terms of how mean she was to him initially.

Autism is a big part of this book, and I thought LaZebnik handled the condition well, in both characters. Ivy and Ethan, and their fellow classmate Diana, and others in the class - they all have similar tics and mannerisms, but they're also very different, in terms of the spectrum. I appreciated this a lot, because (in my experience) there are so many different behaviors and mannerisms within the spectrum of autism.

The romance - both romances - is not what you'd think! Chloe has a boyfriend for about half of the book. James is cool and there's nothing really wrong with him - he doesn't cheat on Chloe, he's not sleazy, he's not a jerk to her. But he doesn't really get why Chloe is so attentive and devoted to her sister, and about halfway into the story, Chloe and James break up. It seemed fairly natural and with minimal drama, and I actually ended up not minding that Chloe had a boyfriend that wasn't the intended love interest (usually this bothers me because LOVE TRIANGLE).

But this aspect of the romance worked fine for me, because Chloe and David barely knew each other at the time, and they didn't have the best opinions of each other. By the time they both start to develop feelings for each other, Chloe and James break up, and it's a fairly clean break. Chloe and David are great together! They're supportive of each other, and they understand each other. I didn't really swoon over them because there weren't a lot of swoony scenes or magical kisses, but I liked their romance.

Ivy's own romance is great! I had a feeling about it and I think everyone else does too. It was great to see Ivy come out of her shell a little and try new things with Ethan, and explore her feelings about him possibly being more than a friend. Ivy's tentative friendship with Ethan was interesting to see unfold, but her romance is even better.

It was also pretty cool to see the evolution of Chloe's relationship with her stepfather. I hated him initially, and I still don't totally like him, but I liked him more towards the end of the book. Chloe's mom too. David has a strained relationship with his stepmother and his father, and those relationships don't mature like Chloe's do, but they still improve. LaZebnik handled the development of these familial relationships fairly well, in my opinion.

Overall, I have to hand it to LaZebnik - this was a fantastic book. I don't usually like YA contemporary, especially the ones that are heavy with tough issues. This book had "tough issues" (difficult stepparents, struggling find a balance with an autistic sibling, xenophobia exploring relationships), but I like the tone of the book, and how the issues were brought across. This isn't a book that will make you ugly-cry and break your heart - which made me very happy. It is definitely a book that makes you stop and think about xenophobia, and how you view autism, and loved ones of those with autism.

Nothing really! Maybe more kissing from David and Chloe?

If you like YA contemporary, then definitely put this one on your TBR! I'm not a YA contemporary person and I enjoyed it. It's worth the read - if anything, it'll open your mind to the a completely different world that you might never have thought about (isn't that the lovely thing about books!). I've never read a YA book like this (I'm sure they exist, I just haven't read any).

4 stars. I really enjoyed this light yet thought-provoking novel! Especially with the diversity it contains. I'm glad I took the chance and read it. I'm excited to see what else LaZebnik will be publishing!