Waiting on Wednesday (#221): A Poison Dark and Drowning by Jessica Cluess 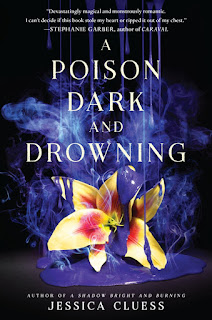 Still, she must play the role in order to keep herself and Rook, her best friend and childhood love, safe. But can she truly save him? The poison in Rook’s system is transforming him into something monstrous as he begins to master dark powers of his own. So when Henrietta finds a clue to the Ancients’ past that could turn the tide of the war, she persuades Blackwood, the mysterious Earl of Sorrow-Fell, to travel up the coast to seek out strange new weapons. And Magnus, the brave, reckless flirt who wants to win back her favor, is assigned to their mission. Together, they will face monsters, meet powerful new allies, and uncover the most devastating weapon of all: the truth.

A Shadow Bright and Burning review

I'm looking forward to reading this sequel! Hopefully it doesn't succumb to Sequel Slump.
Posted by Alyssa at 12:00 AM