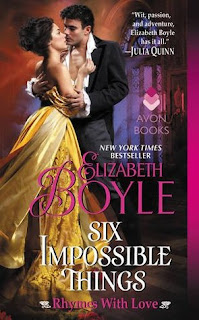 Lord Rimswell is a man of honor and absolutes. If he says something is impossible, it is. Yet his life of right and wrong is turned upside down when he finds himself in a compromising situation with the most unyielding, yet maddeningly beautiful, woman in London. If only he had not given in to the irresistible temptation to kiss her. Now he must marry her.

Miss Roselie Stratton is the very definition of impossible—headstrong, outspoken, and carrying a reticule of secrets that could ruin more than her reputation. Kissing Brody is hardly the most ruinous thing Roselie has ever done as a secret agent for the Home Office…nor will she let a marriage of convenience stop her from continuing her work. Little does Roselie realize that she has underestimated Brody's resolve to keep her safe—for he has hopelessly fallen in love with her and is determined to do the impossible by stealing her heart in return.

I am a huge fan of this series, and the author, and some of my favorite historical romance novels are from this series. But this book was an utter disappointment (for me).

Roselie Stratton has been out for four Seasons and she's still unmarried, but she prefers it that way. She is an unofficial agent of the Home Office, a fact known to very few. Not even Brody, Lord Rimswell, actualy Home Office agent, her childhood friend knows. But he has met Roselie a few times when she was in disguise. When he finds out that it's Roselie under the mask and wig, he is furious. Who knew that the impertinent girl next door grew up to be a meddling, impossible unofficial agent in disguise? When the investigation in Lord Ilford's crimes takes a dangerous turn, Brody tries to stop Roselie from interfering further. Especially when they forced to marry under hasty circumstances. One of them - or both - is going to get hurt, but not if Roselie and Brody can work together to discover the truth about Ilford and his past.

So we have protagonists Brody and Roselie, both of whom were present in the previous books in this series. I adored Brody in the previous books (and I can't really remember what I thought of Roselie - no surprise there). Check the dislikes section for my full discourse on Roselie (spoiler alert: I did not like her). But Brody - well, I adored him.

Brody (or Bradwell, which is very sturdy name) was the second son of a baron, but after his older brother Poldie died in the war, Brody become baron. Brody never really wanted to be Lord Rimswell, especially with his duties with the Home Office. Brody isn't really a rake or a  scoundrel, but he is charming and wicked in his own way. He's rakish without actually being one, which is fun to follow. I love his sense of loyalty and responsibility and duty - as well as his passionate side. Brody is a rare all-around good guy, without being a complete snob.

I loved seeing all of the cameos, from Lavinia, Louisa, Harriet, and their husbands (Tuck, Piers, Roxley). Harriet is one of my favorite heroines of the series, and I love the (small) role she played in this book. Other secondary characters were lovely - Miss Minx (hahahaha), Lady Wakefield, even the dowager Lady Rimswell.

This story was fairly engrossing, though I did struggle at times when it got a little slow and boring. It took me by surprise when, halfway through the book, Brody and Roselie were caught in a compromising situation and immediately got married. Usually the hero and heroine find themselves in a compromising situation but never get caught, so that took me by surprise. But I liked this twist, because it threw off the non-balance between the two, and really forced them to get closer.

I really wish I liked the romance but overall, I didn't, and it circles back to my dislike of Roselie. The romance had its steamy times but nothing remarkable.

Overall, this book wasn't awful, but I'm struggling to come up with more things that I genuinely liked. Brody, most of the secondary characters, the one or two steamy scenes, the story in general. But the female protagonist ruined my overall enjoyment of the book.

Let me first say that sometimes when I find myself not connecting with or liking a female protagonist, I tell myself to put myself in her shoes, and imagine myself in the story as her. Well, I tried that with Roselie. And I failed to agree with a single one of her decisions (except marrying Brody, maybe).

Where do I even start... from the beginning of this book, Roselie rubbed me the wrong way. She is masquerading in super sexy clothing, a mask, and a wig, trying to recover stolen information, or find out information about this or that relating to the nefarious Lord Ilford. This alone is not plausible and and had me calling BS. I already disliked her for putting her name and reputation, and her family's name and reputation, in danger. She is very selfish, and she could have (and should have) gotten caught. Luckily when she did get caught, it was by Brody.

To be honest? One of the things I absolutely hate about this new crop of historical romance heroines is their complete disregard for their reputation and their family's reputation. There are so many new HR books with heroines who are "bada**" and daring and assertive - feminist, I suppose. But it just does not work for me, for several reasons. (1) It's historically inaccurate (well, to the degree that these authors are portraying). (2) It's kind of irritating (again, to the degree that the authors are portraying). (3) The heroines, to me, come across as incredibly stupid?

Take Roselie - she refuses to listen to Brody when he tells her that she should do this or that. Like, she refuses on the principle that he can't tell her what to do. What kind of backwards, dumba** logic is that? You're so proud, but you can't take it down like sixty notches when someone tells you that you are literally a dead woman with a target on her back?

I wanted to strangle Roselie so many times. I mean, if I knew her in real life, I might have. Her "assertiveness" really grated my nerves. Don't get me wrong, I love assertive heroines and I think it's great when they stand up for themselves, but Roselie was so irritating, and pig-headed, and stupid. She's one of those characters that thinks she is so smart, but she came across as incredibly stupid. And selfish. So, so selfish.

I couldn't even connect with her! I thought for sure I'd at least be able to connect with her as she fell for Brody. But I felt nothing towards her. She seemed more of a flat, static character, especially compared to Brody. I don't really see what was so fascinating and interesting about her (other than her sexy, breast-padded alter ego Asteria, whom Brody was super attracted to, without knowing it was Roselie).

I didn't feel anything for Roselie (other than sheer irritation, wrath, and loathing), and it made it hard for me to ship the romance. I adored Brody and I love that he found love, but I really just did not care about the romance. Once you hate the female protagonist, it's really hard to like the book. The romance seemed so flat though, regardless. Besides lust, I really didn't get a lot in terms of emotions or feelings (mostly from Roselie's side). Really it seemed like she was more interested in thwarting him, running from him, defying him, going against his will... yeah, that doesn't make for a very swoony romance. I don't think I swooned once.

Anyway, I'm done. This book pissed me off in several different ways and all of them connect to Roselie and her stupid, stupid stubbornness. The short of it: Roselie had no respect for Brody, on any level, and she was incredibly selfish and stupid.

I most certainly do not recommend this book, which pains me to say, because I love this series. Try If Wishes Were Earls or The Knave of Hearts, or maybe even The Viscount Who Lived Down the Lane (though Louisa bothered me, in that book). Better yet, try an entirely different author. You know who does assertive, "feminist"-type heroines who don't irritate the s**t out of me? Tessa Dare, Elizabeth Hoyt, Caroline Linden. One of the sexiest and most feminist thing a female protagonist can do is treat her man with respect.

Roselie... did not do that with Brody.

2 stars. I almost can't believe I'm giving a historical romance novel such a low rating! Historical romance novels are usually my "guilty pleasures". This one was supposed to lift me out of a small rut I've been in, but it has sunk me further into the rut. Honestly I kind of hope this series is over, because I don't want to be disappointed again!