Review: A Moment of Madness by Brooklyn Skye 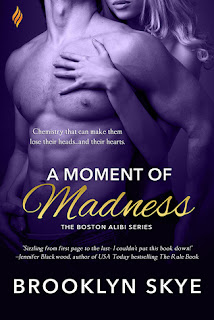 Sailor Carlson comes back to Boston to make amends with her dad, only to find he passed away, and his bar, the Alibi, now belongs to a bearded, grumpy hottie. Mr. Hottie liked her enough for a night of nameless sex on the kitchen counter, but he wants nothing to do with her now he knows who she is.

Ryan Edwards has been running the Alibi for seven years. Being in a bar night after night means he's no stranger to one-night stands. But when the quirky, beautiful blonde he spent a hot night with shows up at his bar claiming it used to belong to her father, his guard goes right up.

Ryan's desperate for a waitress, and Sailor wants a chance to work in the place that meant so much to her dad. If only the tenuous trust they establish were as strong as the pesky attraction simmering between them.

This novel features Ryan, who appeared in A Moment of Weakness. He is the Alibi's owner, and has been for the last seven years (though jointly with Micah, who only recently sold his share to Ryan, after moving to be with Laurel). While checking out a new bar, he helps a woman take her drunk cousin home safely. Sailor Carlson comes back to Boston to fix things with her dad - only to find that he died years ago, and left his bar to someone else. One night, she has to bring a drunk Marissa home... and finds herself bringing home a sexy man from the bar too. Little do they know that he is the Alibi's owner, and she is looking to take the bar from the Alibi's owner. When he finds out the next day, Ryan is furious. But he gives her a job at the bar. After their steamy night together, he doesn't stay mad forever... can he forgive the cute, awkward woman who walked out on her father years ago? Can Sailor find forgiveness in this man who took care of her father for years?

I wasn't expecting to adore both the male and female leads so much. Usually, with romance novels, I like one more than I like the other (and sometimes there are unlikely cases when I hate the female). I usually love the male and this book's male was no exception, but I also loved the female. Sailor is awkward, cute, and so relatable. I don't consider myself nearly as awkward as her, but at the same time, it's refreshing to see such a cute female protagonist in a romance novel. She isn't a bold, brazen, feisty independent woman. Don't get me wrong, she's plenty strong and stands up for herself, but she isn't an alpha female, and I love that about her. She is so sweet.

Ryan, on the other hand, is an alpha but not in an arrogant way. He goes after what he wants (Sailor) and doesn't play any games. When he finds out who she is, he is pissed (and reasonably so). I love how he jumps to her father's defense (she abandoned her father, and Ryan took care of him and the bar). But I was also really happy to see Ryan eventually work through that and help out Sailor. Of course he wasn't going to hand over the bar to her, but he lets her work for him, to let her have the chance to get used to the bar setting.

Ryan is very nice, charming, and selfless in so many ways. Descriptively speaking, the man has it going on. I'm one of those rare women that isn't found of beards, but this guy has a beard and it sounds like he rocks it. I'd love to see the author's inspiration for this guy...

This book actually goes pretty deep and heavy, which was surprising! You don't find a ton of former drug addicts in romance novels. When Sailor abandoned her father, she got married to her high school boyfriend, who was a drug addict. Years later, Sailor finally gets clean and starts to get her life back together. Props to her for that, and props to the author for including this backstory and depth to Sailor's character.

The romance is pretty hot, definitely as hot as the first book or hotter! Well, the first book was okay in terms of heat, but this book was probably a little higher on the heat spectrum. And the progression of the relationship was well-written. These two are sweet together - Sailor with her awkward self, and Ryan with his temperamental, bemused, sometimes grumpy self. They're a good pair together.

Also, it was nice to see both of them put each other in their place, when they deserved it.

The climax of the book involves Ryan jumping to a pretty hefty conclusion (though I understand his reasoning - but he should have talked to Sailor before making that leap). But Ryan is a good guy and a good groveler, and Sailor is a smart girl. It's a great ending, and I'd love to see an epilogue in the future.

Just that one note I made about the climax - Ryan jumps to a conclusion (which isn't a huge leap, to be honest, but he doesn't talk to Sailor before blowing up at her. Communication, people! It really isn't that hard. Sometimes I want to shake couples (both in romance novels and in real life).

This isn't a life-changing, OMG-so-good romance novel, but it's an enjoyable read. If you're looking for something quick, steamy, and sweet, this is a good one. It'll always stick out to me because of how unique the hero and heroine are - you don't see a lot of their types in romance novels (the heroine in particular). This series in general is pretty good. Like I said, the first book (A Moment of Weakness) grew on me, and I like it more than I did previously!

3.5 stars -> rounded up to 4 stars. I'd be interested in seeing more books in this series! Perhaps Marissa's (the drunk cousin's)! Or one featuring Micah's sister (April, I think? I can't remember her name). I'll be looking out for more books by this author in the future!