Review: His Custody by Tamsen Parker 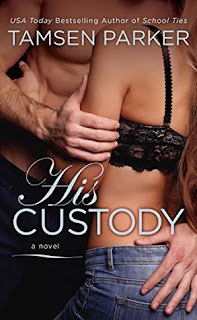 He needs to be a better man for her sake, but she makes him want to be so bad...

Keyne O’Connell leads a charmed life. She has a caring family and a terrific boyfriend. Her senior year is about to begin, and her future looks bright. But one dark summer night robs her of everyone she loves, thrusting her into the care of her boyfriend’s intimidating, much older brother.

Dark and brooding, Jasper Andersson is not a good man. His business dealings are barely legal. He’s a womanizer and a casual drug user. He has no interest in becoming Keyne’s guardian, although given her limited options, he doesn’t have much of a choice. He knows he must protect her at whatever the cost.

But living in close quarters soon stirs up feelings inside them both that are far from platonic. Keyne needs a firm hand to keep her in line, but what she desires could lead Jasper into trouble...

I'm going to begin my review by saying that I really enjoyed this book... until the last fifty pages of the book. Yes, I'm giving the book three stars, despite loving the book (again, until the last fifty pages or so). I'm so disappointed in the last part of the book because it had been so good (for me), until that point. Please be warned - this review will have spoilers (especially in the "What I Did Not Like" section).

I've never read a book by Tamsen Parker, and I don't think I've read a true "guardian/ward" book. I wanted to try one and test my boundaries, and I really enjoyed this book - minus the last fifty pages. I picked this book up on a whim, and while I wish I could say I was glad that I did, I really can't.

Life comes to a halt when Keyne's family - her parents her boyfriend Gavin, and his parents - are killed in an accident while they were on a cruise. She has known Gavin since birth, since their parents were best friends. Which means that she has also known Gavin's older brother Jasper since she was born. Jasper fights for custody of her, knowing that while she has blood family, he is her only real family. He doesn't know anything about being a parent or raising a teenager, but he isn't going to let Keyne go. Living together was never going to be easy, but it gets even harder when the pair recognize their fierce attraction to each other, and how deeply they've fallen for each other.

I loved both of these characters from the start, but especially Jasper. He is fourteen years older than Keyne (thirty-one at the start of the book), a successful and rich businessman with a very kinky dominant side, and a very pleasure-filled life. When his parents, Keyne's parents, and his little brother are killed, he has no time to process his grief. Keyne's grief is overwhelming and very present, and Jasper wants to be there for her before anything else. I love how Jasper puts Keyne first in everything, and takes care of her, from start to finish.

Keyne is incredibly broken after the five deaths, and for months. She doesn't process the grief well. It's good that Jasper is so caring and understanding because Keyne becomes a zombie for a few months, before she begins to be alive again. I liked Keyne and her fragility, but I also liked her quiet, budding strength. She leans on Jasper and learns to live again because of him.

Okay, you probably wondering - he is thirty-one and she is seventeen and HOW is this a romance novel? I assure you, nothing sexual happens between them until she's eighteen. In fact, about half of the book is spent over months (maybe eight months? I can't remember), in which they live together and heal together, but they ignore their attraction as best they can. Nothing happens until she turns eighteen. But even before then, it wasn't really weird. Nothing about the situation struck me as weird.

And even then, Jasper is careful to always give her an out. He gives her so many options, and makes sure that she knows that she is safe with him and can stop him at any time. He is gentle with her in that regard... but nothing about the romance is gentle. He is kinky and a true dominant, and she discovers that she likes some kinky aspects of sex that she didn't fully understand. The two of them together are tough, passionate, and fiery, and a lot of the scenes with them in the second half of the book are scorching hot. There are BDSM-type scenes in this book, though nothing super super erotic or hardcore.

I'm going to be blunt - the last fifty pages made me angry, and disappointed. This is the part of the story in which Keyne goes to college. She goes to Yale, about an hour away. But Jasper, being the noble guy that he is, tells her that she should go and meet boys and have sex and do whatever, even though he also tells her that he loves her and will wait for her, and she clearly tells him that she loves him and only wants him.

You can probably see where this is going.

I'm 100% confident that Keyne didn't have vaginal sex (i.e. penetration) with anyone. But she did get a boyfriend in the first few months at college, and she lets him touch her and do stuff to her, and she does stuff to him. Again, no penetration, but... none of this sat well with me. How can you claim to love someone and be devoted to them, but also go "exploring" with someone else? Jasper was furious about that, but sad nothing, because he wanted her to be happy. Also, we as readers know that Keyne (probably) didn't have sex with that boy, but Jasper never knew that. And of course, I could be wrong, and Keyne most definitely could have had sex with the boy at some point. A lot of time passes.

Look, I'm all about choices and empowerment and whatnot. This really bothers me though, because Keyne loves Jasper, and she always claims she wants to make him happy and doesn't want to hurt him. But in a lot of ways, her "exploration" in college (four years, by the way) makes me feel like she did all of that to spite him for giving her this choice. Which is f***ed up, if you ask me. I get it, he told her to go and live life and have sex with whomever, but that does not mean she had to - especially since she really didn't want to. She didn't even like that boy! She recited her homework and schedule while he put his hands on her. Do you see my frustration?

Friends, while (penetration) sex is regarded as intimate and personal in most instances, I think the "other stuff" that people do is also really intimate and personal... and the fact that Keyne allowed herself to do those things with and to other people, when in fact she only wanted one man, really bothered me. Especially since Jasper was over there with his very celibate self, not letting anyone touch him.

Yup, those last fifty pages though.

I really don't recommend this book and kind of wish I hadn't read it. Which is a shame, because I loved it, up until Keyne goes to college (which is in those dreaded last fifty pages I keep mentioning). I'm so annoyed and also very disappointed and sad. This could have easily been a new favorite romance novel of mine, had the climax/ending not marred it so much for me. So, no, I don't recommend it.

2 stars. This hurts for me to dish out this rating for such a wonderful book that I loved until the climax/ending. I was loving this book, and flying through the heartbreak and the slow-burn romance and the sexy, sexy times! But the last fifty pages really ruined the story for me, and I can't look at this book this same. I might even delete it from my Kindle, because I can't stand to look at it anymore. I think I got too invested and then I got too hurt by this book!