Review: Letters to the Lost by Brigid Kemmerer 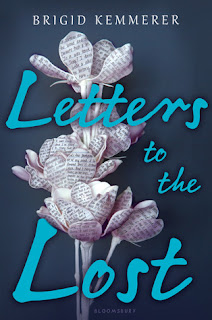 Juliet Young always writes letters to her mother, a world-traveling photojournalist. Even after her mother's death, she leaves letters at her grave. It's the only way Juliet can cope.

Declan Murphy isn't the sort of guy you want to cross. In the midst of his court-ordered community service at the local cemetery, he's trying to escape the demons of his past.

When Declan reads a haunting letter left beside a grave, he can't resist writing back. Soon, he's opening up to a perfect stranger, and their connection is immediate. But neither Declan nor Juliet knows that they're not actually strangers. When life at school interferes with their secret life of letters, sparks will fly as Juliet and Declan discover truths that might tear them apart.

I've read all six of Kemmerer's previous novels (and some of the novellas too), and for the most part, I enjoyed all of what I read. Kemmerer has a way of writing broken teens who are trying to find their way. But I think Kemmerer is at her best, with this book. This, to me, is her best work. This book split me open and made my heart hurt - in the best of ways. I wouldn't say that I get emotional over books, but this one made me feel some feels.

This is Juliet Young's and Declan Murphy's stories, which becomes one story. Juliet's mother died in a hit-and-run car crash, and she has been grieving ever since. Juliet used to write letters to her mom since her mother was often overseas, as a photographer in war zones and such. And so Juliet continues to write letters to her mom, but leaves them at the grave site. Declan Murphy has community service, which involves mowing and lawn of the cemetery. He finds one of the letters at a grave site, reads it, and writes back. An exchange of letters occurs, and then it becomes emails. Juliet and Declan have no idea that they are reaching out to each other and helping each other through their grief and pain. But in real life, Juliet misjudges Declan, and Declan misjudges Juliet. Both are not the other's biggest fans; but when one finds out that the other is the letter writer, will it matter?

I sat down with this book with the intention of reading only half of the book, and saving the other half for the next day. I started reading really late into the night (after 9 PM) and had no intention of finishing. But hours went by, my family went to bed, and I didn't even notice. I was so engrossed in this book, and I couldn't stop reading, and the next thing I know, I've finished it. It was that wonderful, and heartbreaking, and thought-provoking.

Usually when there is a YA book with dual, first-person POVs, I adore one of them, and feel so-so about the other (I don't have this problem with adult books, which is a relief). With this book, I liked both characters a lot. I think I liked Declan more, and I really connected him more (for some reason - it's not like I have a stepparent or a father in prison or a shred of the problems he has).

Declan is so misjudged, and by everyone. Everyone labels him as a thug and a criminal, and when someone says something bad about him, no one comes to his defense. If he is anywhere near a bad situation, it gets blamed on him. He and his stepfather practically hate each other, and his mother is so passive and doesn't even talk to him. His sister is dead, his father is in jail, and he has to work off ninety hours of community service for one very bad decision. But... Declan isn't a bad guy. He has an attitude and he doesn't hide his anger, but he isn't a terrible person. He has a strong sense of morals and he is very intelligent, But again, misjudged. Even - and especially - by our heroine, Juliet.

Juliet is overwhelmed with grief. Her mother's death is still fresh, and even the thought of getting rid of her mother's cameras makes Juliet break down in tears, or panic. Juliet hasn't had an easy year, but she isn't alone. She misjudges Declan badly, and slowly, she starts to realize that. Juliet is a good girl, though at first she is a little judgmental (towards Declan). In general she isn't... but to him, she was. She was to the point where she was afraid of him, which I thought was silly.

To me, it's a testament to Kemmerer's talent as a writer, how she can characterize these two teens so well, and bring about those fears and angers and pain so well, such that the reader is incredibly aware of them. There wasn't a chapter that went by that I didn't distinctly feel Declan's fury and his hurt, or Juliet's panic and grief. Such good writing, in terms of the development of these two characters.

The letter-writing aspect of the story was so wonderful. At first it was odd - Juliet was furious to find out that someone wrote on her private letter to her dead mother. But then the letter-writing turned into something more meaningful and necessary. Both characters had a lot of pain and hurt to work through, and the anonymous letter-writing really helped. Imagine being able to lay out your big problems, your little problems, your crappy day, to someone who knows exactly nothing about you. Someone who knows nothing, and yet everything. Letter-writing isn't new in YA (P.S. I Like You by Kasie West, Tell Me Three Things by Julie Buxbaum...), but it's a concept that I adore so much.

This is YA contemporary with a lot of "tough issues" explored. Declan's relationship with his stepfather, with his mother, Juliet's relationship with her father, Declan's crime and his community service, his anger, Juliet's grief, Juliet's judgment of Declan... there is a lot to unload and handle, in this book. The most meaningful (or one of them) was Kemmerer's message about misjudging people - someone like Declan will get blamed and beat down because people already expect him to be a bad person, a thug and a criminal, but that isn't fair and it isn't right.

There is romance and it's both there and it's not. Letter-writing Declan and letter-writing Juliet definitely fall for each other through letters - their connection is very powerful. In-person Declan and in-person Juliet have more of a slow-burn, hate-to-love romance. They bicker and fight nearly every time they see each other, and they constantly snipe at each other and misjudge each other. But their relationship changes a lot. There is a lot of chemistry between them, but it's often off the page. I liked the romance, despite the "physical" side of the romance not really being there.

There were a lot of wonderful secondary characters in this book! Rev, Declan's best friend, who has a heartbreaking past but a positive outlook on life. He is an amazing friend and I loved their bromance. He's one of my favorites, and I can't wait to read his story next. Rowan, Juliet's best friend, who is so supportive and such a good best friend. Then there is "Melonhead" (his name is Frank), who is Declan's community service supervisor. He actually plays a huge and very positive role in Declan's life, and I'm glad he is in the story. Same with Rev's parents. Positive role models - not like Declan's mother and stepfather. Ugh, to both of them.

The ending is perfect! Things work out well for Declan in many areas of his life. It's not like all of his problems are fixed overnight, but he takes a lot of baby steps in the right direction. Same with Juliet. And of course, same for the two of them, in terms of togetherness. Although, I have to say, we need an epilogue, or a loooooot of cameo appearances in Rev's book. There is a distinct lack of physical swoon that needs to be made up for, in Rev's book!

The only thing I wanted more of was the thing I just mentioned - more physical swoon. I shared a snippet of this book on my latest Swoon Thursday post, and notice how it isn't a kissy swoon! Yeah, there could have been more kissy scenes. A lot more.

YA contemporary fan or not (I'm not one), I recommend this book. It is such a meaningful and thought-provoking book. Also, I can't remember the last time I got that swept up in a story, to the point where I unintentionally finish it or stay up really late without being aware. (I stay up late reading books all the time but it's always intentional). There are a lot of tough topics explored in this book, but it's not overwhelmingly heavy. This is an excellent story that is powerful beyond it being a YA contemporary story about two teens who meet in more than one way.

4.5 stars -> rounded up to 5 stars (a rare 5 stars from me!). I am incredibly excited to read Rev's book next year! So far I'm seven for seven with Kemmerer's books and I have yet to be really disappointed. While I certainly do recommend her Elemental series, I recommend this book even more so!