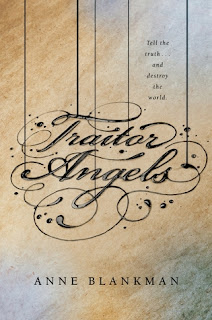 Six years have passed since England’s King Charles II returned from exile to reclaim the throne, ushering in a new era of stability for his subjects.

Except for Elizabeth Milton. The daughter of notorious poet John Milton, Elizabeth has never known her place in this shifting world—except by her father’s side. By day she helps transcribe his latest masterpiece, the epic poem Paradise Lost, and by night she learns languages and sword fighting. Although she does not dare object, she suspects that he’s training her for a mission whose purpose she cannot fathom.

Until one night the reason becomes clear: the king’s man arrive at her family’s country home to arrest her father. Determined to save him, Elizabeth follows his one cryptic clue and journeys to Oxford, accompanied by her father’s mysterious young houseguest, Antonio Vivani, a darkly handsome Italian scientist who surprises her at every turn. Funny, brilliant, and passionate, Antonio seems just as determined to protect her father as she is—but can she trust him with her heart?

When the two discover that Milton has planted an explosive secret in the half-finished Paradise Lost—a secret the king and his aristocratic supporters are desperate to conceal—Elizabeth is faced with a devastating choice: cling to the shelter of her old life or risk cracking the code, unleashing a secret that could save her father…and tear apart the very fabric of society.

I knew little about this book before reading it, but oh how I enjoyed it! I picked it up because I've had success with Blankman's books in the past; Prisoner of Night and Fog and Conspiracy of Blood and Smoke were fascinating historical fiction novels. I knew that this new books was also historical fiction, but for some reason, I had thought it was set during the Civil War! I hadn't read the synopsis, otherwise I would have known better. Clearly Michael Shaara's The Killer Angels was on my mind (great book, by the way). Anyway! Traitor Angels is set in 1667 England, and it deals with John Milton and Galileo Galilei.

Elizabeth Milton is the third of four daughters of John Milton, a now-blind but once-notorious poet of England. Her father has always treated her differently from her sisters; she can speak, read, and write in many different languages, and she was well-taught in swordplay and self-defense. But most differently, her father trusts her to help him write Paradise Lost (she writes what he dictates). One day, all of her father's training comes to good use: her father has been arrested by the king's men. Elizabeth and her father's strange houseguest Antonio Vivani race across England to uncover her father's carefully hidden clues and secrets, in hopes that whatever he hid might be bartered to the king for his freedom. But what Elizabeth and Antonio discover is more dangerous than one man's life - it could mean the end of society as they know it.

What a twisted tale! Well, not "twisted" like one typically means it, but it certainly was tricksy! One of the things I liked the most about this book was the endless clues and puzzles and word games there were in this book. John Milton is known to be a great poet, and his words are his weapon (I think Antonio said something similar, in the book). I love puzzles and games and tricks and clues! Elizabeth and Antonio are clever, and Elizabeth knows her father and his work better than anyone, so it was fun to watch the pair work through the clues.

Elizabeth is so incredibly intelligent. Milton's daughters were known to be uncommonly well-taught, and Elizabeth is no exception. She knows many languages (read/write/speak/understand), and she knows swordplay very well (to the point where she keeps knives strapped to her arms at all times), and she has a keen interest in astronomy. Elizabeth is clever and strong and very brave. She does not hesitate to go after her father, to find some way to free him.

Antonio was sent to meet John Milton by his master (a Duke in Italy), and he is caught up in the search with Elizabeth when John is arrested. Antonio seems like a strange foreigner at first, but it becomes clear that he is noble and determined to help Elizabeth, and not just because his master sent him. Antonio is kind and quietly protective, but he lets Elizabeth be and is not a seventeenth-century sexist pig. I suppose this is anachronistic, but hey, I like Antonio a lot, and I am letting this slide.

Robert Crofts is another very important character in the story. Elizabeth and Antonio meet him on their way to finding her father's clues. Robert is in a position to help them more than they can help themselves, and his assistance is pretty necessary. Robert is exactly what I expected, and I felt for him! I liked his intended, Lady Katherine, very much.

There is so much history in this book! Galileo Galilei's work and theories are discussed in this book, and it is one of his works that is what Elizabeth and Antonio end up seeking. I love how meticulously the author does her research, and interlocks so many historical events! She has all the dates and events lined up really well! This story is set just before the Great Fire of London in 1666 - I love how Blankman leaves nothing out! Such great foresight. Or plotting. Or just pure brilliance. I am in awe!

This book does have a religious theme to it, or perhaps a theme that somewhat discredits or refutes religion. In 1666, Christianity was dominant in England, and people like Galilei were considered heretics for even postulating ideas that seem contrary to the Church's teachings. Antonio is an atheist, it seems, and Elizabeth starts to question her steadfast Puritan beliefs. Religion is pretty important in this book, but then, it can't NOT be, given the time period.

The story was so exciting! It seemed like there was never a dull moment. There were all sorts of action scenes, and balls, and betrayals, and moments of panic, and I enjoyed it all.

The romance is not a huge part of the book, but it is there! No love triangle. Watching Antonio and Elizabeth fall for each other is sweet and subtly swoony, though not slow-burn. These two are cute together! And they're both wonderfully smart, so I think they're a great pair.

Overall, I think you can tell that I was pleased with this book! It's definitely my favorite of Blankman's three novels. It's a great standalone, I recommend it!

Hmm, I don't know that I can think of anything at the moment. I'm not giving the book five stars (I liked it but it's not a new favorite), but I don't have complaints, I think!

You don't have to like historical fiction to like this novel! In fact, you don't need to know anything about the 1600s, or John Milton, or Paradise Lost, or Galileo Galilei. It helps (history nerds unite!), but not necessary, as Blankman does a great job of keeping readers educated on what they need to know to understand what is going on (i.e. the context). This is a great story, and an exciting one! I love stories that deal with clues and puzzles and finding something.

Even if you didn't like Blankman's debut duology (or maybe never read it), I'd recommend this book; it's completely different from her debut duology! Less nail-biting, scary, etc.

4 stars. As I said, definitely my favorite of Blankman's books! I'm excited to see which time period she'll write about next. She's done the 1900s, 1600s... the possibilities are endless!