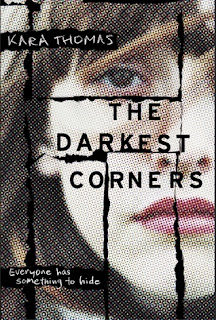 The Darkest Corners is a psychological thriller about the lies little girls tell, and the deadly truths those lies become.

There are ghosts around every corner in Fayette, Pennsylvania. Tessa left when she was nine and has been trying ever since not to think about it after what happened there that last summer. Memories of things so dark will burn themselves into your mind if you let them.

Callie never left. She moved to another house, so she doesn’t have to walk those same halls, but then Callie always was the stronger one. She can handle staring into the faces of her demons—and if she parties hard enough, maybe one day they’ll disappear for good.

Tessa and Callie have never talked about what they saw that night. After the trial, Callie drifted and Tessa moved, and childhood friends just have a way of losing touch.

But ever since she left, Tessa has had questions. Things have never quite added up. And now she has to go back to Fayette—to Wyatt Stokes, sitting on death row; to Lori Cawley, Callie’s dead cousin; and to the one other person who may be hiding the truth.

Only the closer Tessa gets to the truth, the closer she gets to a killer—and this time, it won’t be so easy to run away.

My goodness, this book was chilling! I was thoroughly engrossed but also extremely terrified, from start to finish. I admit, I don't read a ton of YA psychological thrillers, or mystery, so this was a huge change of pace for me. And quite good, too!

Ten years ago, Tessa and Callie testified that they saw the face of the person who killed Callie's cousin, Lori, one night at Callie's house. Tessa left Fayette after the trial and moved to Florida with her grandmother. Callie and her parents remained in Fayette, but Callie has been stuck. Ten years later, Callie relies on alcohol and substances and boys to help her forget. Ten years later, Tessa's father is dying of cancer in Fayette's prison, and Tessa leaves Florida to stay with Callie and her parents. Ten years later, there is a new murder like the ones ten years ago - but the man who Callie and Tessa helped put behind bars is still behind bars. Nothing is adding up, neither past nor present. Tessa and Callie may not have talked to each other since the trial, but they both know something with this recent murder is very wrong.

I can't say I'm an expert on psychological thrillers, or mysteries, but I think this psychological thriller was EXCELLENT! Probably the best I've read (I'm drawing a blank, trying to think of others I've read, but I'm pretty sure none have come close to how great I think this book was). Thomas wrote a completely twisted and jaw-dropping story. Usually I'm one of those readers that figures out the whodunit and the twists fairly early on, but I didn't catch on until the protagonists (Tessa and Callie) caught on.

I am in awe of how intricate and twisted the whole story is! There are several events that Tessa questions, several situations/cases that don't make sense to her, that have never made sense to her, and/or about which she's trying to find out more. For one, the latest murder, of Ari (someone who Tessa new when she was little and living in Fayette). Also, where Tessa's sister is (her sister visited their father when he was dying, but Tessa hasn't seen her in ten years). Furthermore, where Tessa's mother is. Tessa hasn't seen her in years, and neither has anyone else. And finally, who the real Ohio River Monster really is - is it really Stokes, the man that Tessa and Callie helped put behind bars?

Believe it or not, all of these situations are somewhat connected... twisted, yeah? I won't say anything else about the plot and the murders and whatnot, but just know that the author does a really good job of weaving this story. Nothing is obvious, nothing is predictable.

There is a lot of emotional growth in this book, in terms of both Tessa and Callie. This book is written from Tessa's first-person point-of-view; Tessa has a strong, distinct voice, very blunt and almost crude and somewhat pessimistic. Tessa learns to open up and lean on others, throughout this story. Callie is different. She hasn't been handling the trial well over the past ten years, and she pretty much abandoned Tessa when Tessa had to live with her grandmother in Florida. Callie is, in my opinion, a mess, but she grows a lot throughout the story.

There is no romance in this book - which is both good and bad. Good, because not every story needs romance, and I didn't think this one needed it. Bad, because a little romance never hurts (no love triangles though), and there was a boy that I thought would play more of a role, on Tessa's part. But that's okay! He's a sweetie but he's definitely a periphery character.

Like I said, I don't want to go into details, and I definitely don't want to spoil anything, so I'll wrap up here! I'm so impressed with this story and the way it was written and constructed. I was chilled and freaked out and worried and desperate while reading this book - I couldn't read fast enough! Don't read this one at night, people.

This isn't getting five stars from me (it's not a new favorite - as much as I loved this book, I don't think I could see myself reading it again; I'm a scaredy cat!). But it was really good and I think others will enjoy. I mentioned the lack of romance being both good and bad - see my explanation for that above! That's the only thing I think I would complain about specifically.

4.5 stars -> rounded down to 4 stars. I'm glad I decided to give this book a shot! I liked Kara Taylor's books, so I knew I would give Kara Thomas's books a chance (same author, different pseudonyms!). I highly recommend this (chilling) book!

Win a copy of The Darkest Corners! USA only, as per the publisher's rules. Good luck!