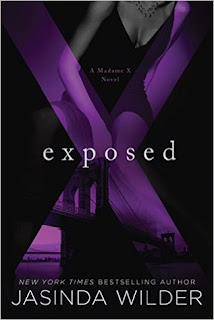 Everything Madame X has ever known is contained within the four walls of the penthouse owned by her lover, her keeper, the man who controls her every move and dominates her desires. While Caleb owns her body, someone else has touched her soul. X’s awakening at the hands of Logan’s raw, honest masculinity has led her down a new path, one that is as exciting as it is terrifying.

But Caleb’s need to own her completely knows no bounds, and he isn’t about to let her go. Not without a fight that could destroy them all…

This series is SO not what I expected. When I picked up Madame X, it was mostly because the publisher sent a copy, and I've enjoyed Jasinda Wilder's books before. This series is heartbreaking to read, and very difficult to read. Your average romance reader (like myself) may not necessarily enjoy the books. But the story is so heartbreaking and uplifting at the same time, and I love following X's story, no matter how shocking and terrible it can be.

X is still in Caleb's clutches, though she no longer wants to be owned and controlled by him. She can tell that he doesn't care about her, and that he keeps her around because she's beautiful and he wants sex from her whenever he wants. But she hates it. She has nowhere to go, so she stays. He has all the answers about her past (which she can't remember, due to amnesia), so she stays. But she can't forget Logan, from whom she walked away. But as X continues to question her life at Caleb's building, she'll become less and less convinced that she is where she needs - and wants - to be.

This series is so emotionally charged, and in so many ways. It's heartbreaking to follow X's thoughts, her feelings and doubts and insecurities. I wanted to scream at her and shake her so many times - especially when she kept going back to Caleb. She kept letting him use her (you know what I mean), but she was starting to see how wrong it was. Here's the thing - while this was difficult to read, it was SO well-written by the author. X's conflicting thoughts, her indecision, her struggle against Caleb... all of these internal and external issues are really explored. X is weak, but she is becoming stronger. Caleb is a drug she doesn't want to depend on, and she is now seeing how much she wants to be free of him, and find her own way.

Like I said, I wanted to shake X at times. There were times in this book when I thought she was pathetic. But what stops me from hating this book is that she knows it too. She feels just as pathetic and weak and disgusting. Every time he touches her, she can't stand it. And at the very end of this book, I wanted to give her a hug and a fist-bump. While I don't agree with X's lifestyle and choices she made earlier in this book and the series, I LOVE how far she's come.

We learn a great deal about X and her past, including her name, her family story, and what really happened that brought her to Caleb (or vice versa). Everything is unraveling, bit by bit, and while secrets unravel, X begins to want more.

Logan is a huge player in the plot of this book. He shows up quicker than I thought he would, and I love his interactions with X. I'm a little surprised by how much he cares about X, but perhaps I'd forgotten the depth of his feelings from Madame X. Logan is a sweetheart and totally understand and caring. I like that he puts his foot down in one aspect with X, and tells her that she needs to choose and be 100% sure of her decision, and never turn back. He knows that she can't choose him yet, that she's not ready, but he hates it. And it bothers him just as much (and more) as it bothers us readers, that X is not his and won't stay with him. BUT you just can't seem to hate X (believe me).

Caleb, on the other hand, can be freely hated. He is an awful person, and I commend the author for making him such an interesting villain (NOT a good villain). He seems human like the rest of us, but he isn't. He's a sick monster and I hope he gets what's coming for him, in book three. But like I said, I think it's interesting how the author creates his character arc.

There are some really steamy scenes in this book. X and Logan get really heated, and I love the progression. This book is much steamier than Madame X, and for several good reasons that I won't mention. Just know that X is no longer blind to a certain someone.

Overall I'm pleased with this book. For the most part, anyway. There were some scenes that both broke my heart and disgusted me, but I told myself, X hates it too. So I focus all my rage on Caleb, because he is to blame for EVERYTHING. The ending of this book is actually is meanest ending ever, and I'm totally docking a star for that. I need book three!

Like I said above, there were some scenes that disgusted me (and I'm not talking about the fact that the scenes were super rated r - I didn't find any of the scenes crazily erotic). I hate Caleb, and I wanted to hate X for going back to him, but then I remember that he is all she knows. He made her who she is, after rescuing her and taking care of her through her amnesia (there was no one else to take care of her, so I guess it's nice?). He's not nice though. He's disgusting and everything about him is cool calm collected precise orderly and totally disgusting. Think: pimp.

Lastly, the ending. It was so cruel! I'm sure it won't stick but if it does... well, book three is already starting with four stars (versus the full five-star rating) and I'll dock as I go.

I cannot recommend this book to your average romance reader. You won't like it if you're looking for a fun romance novel, or a clean linear relationship. While the emotional side of things is VERY linear, the physical side is not. And it's heartbreaking, because X is all but forced. Still, I'm highly enjoying watching X grow, and Logan and X's relationship grow (under all the circumstances), and I totally need answers to all the questions left open!

3.5 stars -> rounded up to 4 stars. Don't start this series expecting steamy romance with angst. No, this is a heartbreaking and emotional series, and while it's definitely not something I'd enjoy on a normal basis, I'm glad I'm giving the story a chance.

Nightmares of sirens and flashing lights and a pair of cold cruel dark eyes staring haughty and inscrutable down at me as I am used like a receptacle. Nightmares of a perfect body pinning me to an elevator door. Sorcery, stealing my will, manipulating my desires, cool silk of a tie wiping my face. Rain cold and wet and windblown, shifting shadows and blood and pain.

My dream is pervaded by a voice: “Isabel, you’re okay. It was just a dream.”

The voice is in my ear, soft and tender and warm.

I am Isabel; I have to remind myself that it is true.

I am lifted, cradled. I hear a heartbeat under my ear, feel soft cotton under my cheek. I am lying ontop of him, as if he is my bed. His hands smooth in caressing circles on my back.

“Don’t apologize, sweetheart. Cry if you need to. I’ve got you. I won’t let go.”

I can only cling to him and cry. My whole body shakes with shuddering, wracking sobs, as if a lifetime of pent-up tears are being ripped out of me wholesale.

I don’t know how long it lasts. Minutes? Hours? A measureless time of weeping. I think I have cried more in the last twelve hours than in all my life.
Eventually, I am able to breathe normally and the sobs and shudders fade.
I remain still, barely breathing now.

On top of Logan.

Aware of him, suddenly.

Completely attuned to every inch of him, stretched out beneath me. His arms around me, his chin tucked against the top of my head. His denim-sheathed thighs beneath mine, thick and hard. His breath on my hair. His hips nudging mine. My hands on his pectoral muscles, my breasts crushed against his sternum.

There is a shift then. A charge to the air. Electricity crackling.

And now, between one breath and the next, it is sexual, the way I’m lying on him.

I can’t breathe again, but for a different reason.

I can’t breathe for wanting him.

“I need you to get up,” he says, and it isn’t what I expected. “There are still some people working out there, and in a few more seconds I’m going to forget that.”

“What would happen if you did, Logan?” I ask. I don’t recognize the daring, the boldness, the raw hunger in my voice.

His fingers twine gently into my hair and pulls, tipping my face up to his.

My fingers wrap around the back of his head, clinging to the nape of his neck, pulling him closer, pulling myself higher on his body, needing needing needing to be closer to him, to press my lips more completely against his, to taste him, to feel him. I breathe him. His hand, resting on my back, slides lower. I arch against him, press my body against his. There is no part of me that isn’t touching him. I pause to breathe, gasping against his lips. I want more of me to touch more of him. I want all of him, all of me, all of us.

I crave completion, of a kind only Logan can provide.

He feathers his mouth against mine, a teasing brush of lips against lips, heat of breath on tasting tongue.

“That will happen,” he whispers.

“Yeah, oh.” His fingers are tangled in my hair, applying gentle delicious pressure to my scalp, keeping my face tilted to his. “And now I can’t stop.”

“I want you. I need you. But Isabel, you deserve better—we deserve better—than on a couch in my conference room, with a dozen people on the other side of the wall.”
Posted by Alyssa at 12:00 AM