Review: Dream On by Kerstin Gier 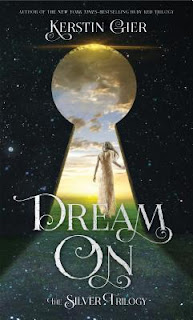 Things seem to be going well for Liv Silver: she's adjusting to her new home (and her new family) in London; she has a burgeoning romance with Henry Harper, one of the cutest boys in school; and the girl who's been turning her dreams into nightmares, Anabel, is now locked up. But serenity doesn't last for long.

It seems that Liv's troubles are far from over--in fact, suddenly they're piling up. School gossip blogger Secrecy knows all of Liv's most intimate secrets, Henry might be hiding something from her, and at night Liv senses a dark presence following her through the corridors of the dream world. Does someone have a score to settle with Liv?

Romance, adventure, and danger abound in Dream On, the second book in the Silver trilogy.

What an excellent sequel! There were so many things about this book that really worked for me. This book is classic Kerstin Gier, with humor and a few awkward situations, realistic teenage speech and actions, and a hilarious and yet deceptively strong and capable heroine. Also swoony boys (and NOT in a triangle/square/pyramid "swoony boys" way). This book was a really great sequel, and an lovely addition to the series, and I can't wait to read book three!

Liv Silver doesn't dislike her life so much; she's adjusted to living with her mother's boyfriend and his twin children, along with her, her sister, and au pair. Florence (one twin) is awful, but Grayson (the other twin) is actually a nice person, a fantastic brother that Liv never had. And Liv has been enjoying her time with Henry, the boy she adores and has been dating for over two months. And the mess with Anabel from book one is over - or is it? Someone is haunting Liv's dreams, and it's not just Liv's dreams - but Mia's too. And someone's been leaking personal information of Liv's to Secrecy, the school's blogging gossip. And what's more, Henry has been even more secretive than usual. Does it have to do with the dream world? Can Liv seek out the danger before someone gets hurt?

I love Liv! She's funny and adorable and sweet - so sweet - and she likes to talk. She's one of those people that talks in a stream-of-consciousness kind of way, and it's hilarious. She's honest and kind and protective of her sister, her au pair, her boyfriend. I like how she seems somewhat absent-minded at times, but she's sharp as a tack. There are so many funny scenes, and also several times when I experienced some second-hand embarrassment. Ha!

Henry is her boyfriend, and he's a pretty important character in both this book and Dream a Little Dream. Henry is really good at dream weaving/walking (however you want to call it), and he and Liv meet in the dream world often. Henry is devoted to Liv, and cares about her a great deal. He's affectionate and kind, and also protective. Did I mention that he's pretty swoony? I like him a lot, secrets and all. He has many secrets though, and it drives Liv crazy that it seems like everyone knows more about Henry than she does. I don't blame her for getting irritated about his secrets - they are secrets that affect her.

I like the pair together. In this sequel novel, as one would expect, there are some conflicts with their relationship. Most of the conflicts have to do with Henry's secrets and Liv's doubts. I like that there are insecurities that one would find in any budding relationship, and there are also conflicts directly related to the paranormal dream aspect of the book. I like Liv and Henry together. There are plenty of swoony moments in this book, but also some heavy and heartbreaking moments. But the romance overall is good, and there is no love triangle. Also, the ending of the book makes up for some of the conflicts during the book.

The conflicts that have nothing to do with the romance are troubling, and the climax climbs steadily until we reach the great reveal of what is happening. And even then, not everything is revealed. I like that the larger conflict of the overall plot of the book isn't a save-the-world-or-everyone-dies kind of conflict. It's serious and dangerous and crazy, but not on a world scale, which I found refreshing. And the high school gossip is not nearly as bad as the synopsis makes it out to be - it barely bothered me (and Liv, and everyone else)!

I like how close Liv and Grayson become! Being stepsiblings forced to live together wasn't easy in Dream a Little Dream, and so I really liked seeing them get closer. Grayson looks out for Liv on more than one occasion, like a good big brother. Their relationship is purely platonic and sibling-esque!

I've mentioned the characters, relationships, romance, plot, overall plot... I think I've covered it all! I really liked this book, and the ending is not a cruel cliffhanger like most sequels of trilogies are. I repeat: no cliffhanger! I mean, the story is definitely not resolved, and I am dying to read book three, but there is no cliffhanger!

I'm still a tiny bit confused as to what exactly Henry was doing in his dream world (think mermaid scene), but I think this will be better explained in book three. I was hoping we'd get a more solid answer about this in particular, but I think it's one of several things that we'll know more about, in book three! Gier always does a good job of answering questions and wrapping up series.

I love this series and highly recommend it! I know there were a number of people that didn't enjoy Dream a Little Dream, but I am enjoying this series. Gier's books are so lighthearted and fun, and realistic and relate-able. If you like paranormal books about dreams (the dream door concept is new!), this is definitely a series to try!