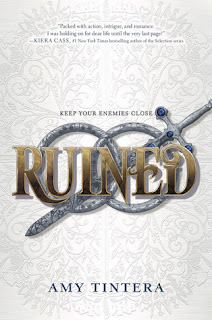 Emelina Flores has nothing. Her home in Ruina has been ravaged by war. She lacks the powers of her fellow Ruined. Worst of all, she witnessed her parents’ brutal murders and watched helplessly as her sister, Olivia, was kidnapped.

But because Em has nothing, she has nothing to lose. Driven by a blind desire for revenge, Em sets off on a dangerous journey to the enemy kingdom of Lera. Somewhere within Lera’s borders, Em hopes to find Olivia. But in order to find her, Em must infiltrate the royal family.

In a brilliant, elaborate plan of deception and murder, Em marries Prince Casimir, next in line to take Lera’s throne. If anyone in Lera discovers Em is not Casimir’s true betrothed, Em will be executed on the spot. But it’s the only way to salvage Em’s kingdom and what is left of her family.

Em is determined to succeed, but the closer she gets to the prince, the more she questions her mission. Em’s rage-filled heart begins to soften. But with her life—and her family—on the line, love could be Em’s deadliest mistake.

Ah! I don't even know where to start with this one. I keep going back and forth between five stars and four stars (I generally round down if I'm indecisive). Ruined was excellent! I was not expecting to like this book as much as I did. The story was fast-paced and engaging, and I was so thoroughly invested that I kept trying to read what clearly wasn't there, upon finishing!

Em's parents are dead, her sister kidnapped, her country of Ruina destroyed. As the daughter of the king and queen and the rightful heir of the throne, Em wants revenge, and she wants her sister back. Em has always felt "useless", as she isn't one of the Ruined (she has no power, whereas the Ruined have incredible power). Her plan: kill Princess Mary of Vallos, marry Mary's fiance (the crown prince of Lera, which is Ruina's enemy), and destroy Lera from within, all the while rescuing Olivia. But Em doesn't expect to fall for Prince Casimir ("Cas"), and their mutual feelings for each other will throw everything out of balance for Em. When the time comes to strike, what will Em choose?

This type of story is nothing new - in which a protagonist infiltrates the enemy kingdom in order to win their trust, but ends up falling in love with the crown prince/royalty. But I love the execution! Tintera did a great job of making this type of story into something fresh and unique.

Immediately, as soon as the story started, I could tell how bloodthirsty Em is. And throughout the story, the bloodthirstiness is maintained. You can tell in how she thinks, acts, and feels, just how much of a survivor she is. She's not Ruined - she has no supernatural abilities - but she is beyond tough and strong and can take care of herself. She is intelligent, calculating, and did I already mention bloodthirsty? She is very skilled with weapons and kills easily, though not without remorse or regret.

I like this change of pace in YA heroines: rarely do we get to see some REALLY bloodthirsty women (mostly it's just a bunch of kickbutt ladies who can work a sword but barely kill anyone - not that there is anything wrong with that). I like Em a lot, and I liked how she grew in this story. She grows into her lack of Ruined power (she's used to not having the power, but she isn't used to trying to lead the Ruined, who have no faith in her ability-less self).

This book is written in third person, alternating POV, so we get to know Cas pretty well, and not just through Em's lens. Cas isn't a Ruined sympathizer necessarily, though he has doubts about the treatment and hunting of the Ruined. He marries Mary (who is Em - Em killed the real Mary), and at first he's aloof and uninterested... but he falls for her (and vice versa). His view on the Ruined changes, partly because of "Mary", partly because of how brutally his father treats them. Cas is entirely different from his parents, and of a different opinion on the Ruined. We first see an obedient, aloof Cas, but he grows and develops into a strong, decisive leader who stands up to his father and forms his own (intelligent) opinions. I like this Cas!

The story is fairly fast-paced, which I really liked. Tintera spends enough time with the world-building and construction of characters and the setting, but she also moves the story along quickly. The first scene thrusts you into the story immediately, with Em meeting Mary to, ah, dispose of her. Then Em goes to Lera, she and Cas get married, and from then, we see Cas and Mary's budding romance, as well as an increasing conflict with the Ruined, and Mary's plan slowly happening.

I felt like there were two climaxes in this book, which I also really liked. The first dealt with the reveal of Em to the royal family - this did NOT happen at the end of the book, like I expected. Cas and the royal family find out after the halfway point of the book, and Em's plans are interrupted. The second climax is Em trying to free her sister, but there are even more obstacles now. I'm skipping through a ton of important events, but my point is, where you think the book might end, it doesn't! I like that Tintera did not end the story with Em's true character being revealed. This kind of ending bugs me in trilogies!

I'm being pretty vague about what it means to be "Ruined", but you'll understand entirely when you read the book. Tintera does a good job of revealing information, both all at once and bit by bit. You won't be left in the dark about pretty much anything!

The romance is slow-burn and adorable! Two teenagers falling for each other under grim circumstances - I love it. They're married and they're uncertain around each other. Even though Em came to the castle with the plan of marrying Cas and then killing the entire royal family, she is unsure and nervous around Cas, and she falls for him. Like I said above, this book does NOT end how we think it might/should, in which Em is revealed; no, it ends later, and I like that Cas and Em still have time both not together and together, and truths are revealed. This makes waiting for book two much easier! Especially with such an adorable (and towards the very end - steamy) romance.

The ending isn't an agonizing one, and I hesitate to call it a cliffhanger, but it doesn't end cheerfully and in a hopeful way. But it's not a cruel one, and in some ways, I think I saw it coming (though in other ways, not so much). I was shocked by certain parts of the ending, and so I'm definitely anxious to read book two! There is no doubt in my mind that I will be camping out in wait for the sequel.

Overall, a novel that really took me by surprise! I really did not know much about this book before starting it (I'd had it added to my TBR shelf on Goodreads for years, so I just hit "download" when I saw it on Edelweiss, not even bothering to read the synopsis). In this case, it really worked out for me! I can't wait to read more.

Obviously I'm a bit peeved at the ending, but it is not the worst ending I've read! In fact, it's a decent one, though I'm beginning to question my sanity in starting new trilogies. These endings!

If you're a YA fantasy fan, it's worth it to read this one! I mean, I think anyone who enjoys YA might like this book. It's one of the most bloodthirsty YA books I've read! Bloodthirsty as in the heroine is super bloodthirsty. Good for her, her life has been terrible! Em's controlled rage and temperament is pretty impressive. Anyway! Read this book.

4.5 stars -> rounded down to 4 stars (what can I say, I'm stingy with the 5-star rating). This book was pretty much not on my radar (why has no one made a huge deal about this book to me yet?!), so I'm glad I went overboard with Harper's Summer galley drop and downloaded it! You all should do the same and experience this exciting story.