Review: Because of Miss Bridgerton by Julia Quinn 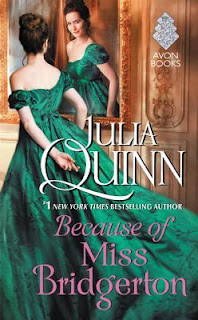 Because of Miss Bridgerton by Julia Quinn
Book One of the Rokesbys series
Publication Date: March 29, 2016
Rating: 4 stars
Source: ARC sent by the publisher

Sometimes you find love in the most unexpected of places...

This is not one of those times.

Everyone expects Billie Bridgerton to marry one of the Rokesby brothers. The two families have been neighbors for centuries, and as a child the tomboyish Billie ran wild with Edward and Andrew. Either one would make a perfect husband... someday.

Sometimes you fall in love with exactly the person you think you should...

There is only one Rokesby Billie absolutely cannot tolerate, and that is George. He may be the eldest and heir to the earldom, but he's arrogant, annoying, and she's absolutely certain he detests her. Which is perfectly convenient, as she can't stand the sight of him, either.

But sometimes fate has a wicked sense of humor...

What a charming and delightful novel! I've not read any of Julia Quinn's books before, but I've always wanted to try her Bridgerton series, at least. I'd like to thank Avon for providing me not only with this ARC, but copies of the Bridgerton books (which I hope to binge-read sometime soon!). This in no way affected my opinion/my review. But I am ever so grateful! I adored this book, which didn't quite surprise me, but I'm glad I did!

Sybilla "Billie" Bridgerton and the Bridgertons have lived like family with the Rokesby family, who lives very close to them. Billie grew up like a sister to Andrew, Edward, and Mary, three of the five Rokesby siblings. But the oldest Rokesby has never liked her, but that's okay, because she's never liked him. George is somewhat stern and quiet and dependable, not free-spirited and fun like Andrew. But after Billie and George collide in a fateful event, both see the other in a completely different light, and neither can stop thinking about the other.

This was the cutest romance story! Most of the novel features Billie and George falling in love (emotionally). This does not happen overnight, despite how the synopsis might seem! The event jolts the awareness, but George and Billie continue their relationship that they've had in the past - bickering, sarcasm, witty statements, barbs, silly insults that aren't quite insulting. So it wasn't an insta-love story!

I don't think I immediately clicked with Billie; she's kind of wild and unmannerly in a way, not at all the proper lady. She never even had a Season or was a debutante. Her family spoils her and lets her run amok. It's strange for the time period, and I didn't quite like her because of her ways. But as I got to know and understand her better, I liked her more! She comes off as wild and irresponsible, but she actually has a good head on her shoulders, and she is quite intelligent and caring. She is loyal to her Rokesby friends, and loves her family and friends dearly.

George, I liked as soon as we meet him (in which he has to rescue Billie from the most ridiculous situation she got herself into). He's always been straight-laced and dignified and dependable and confident in a quiet way, as he is the heir to the earldom. George has always felt the pressure of being heir, and he was never able to do what he wanted - buy a commission and fight for his country. In some ways, he used to be envious of his four younger siblings, who grew up much more carefree than him. THIS aspect is something that is not always expounded upon in historical romance novels - how the heir feels about being the heir, how he grew up feeling, etc. So I like that the author added this extra depth to George. George is not a rogue or a flirt or a charmer, but he is quiet and intelligent and observant and kind.

So as individuals, these two seem so different. But as a pair, they clash in the funniest ways. Every conversation between them is hilarious; each of them trying to one-up the other, or insult the other (in not-mean ways though), or trade barbs. It's great! And so much of the dialogue was so original and so entertaining. I loved their interactions!

What struck me was how little physical interactions there were - you would think that the pair had little chemistry. I think a lot of their compatibility was in how well they matched intellectually and emotionally and mentally, but both of these noticed each other, in a physical way. There was a new-found awareness between them after the beginning scene (the incident). I wouldn't say that this book is sizzling and full of sparks of chemistry. There is also only one sex scene, and it comes within the last thirty pages of the book. BUT the pair is well-matched, physically included.

I like that there is another story going on, while these two characters' story is happening! I'm not sure whose book is next in the series, but besides the love story that we're going to be expecting, we'll get more details on the subplot of this book, which kind of ended on a cliffhanger-y note. Don't misunderstand - George and Billie's story wraps up and ends with this book! But the subplot involving another important character does not. I'd like to know more!

Overall, I was really pleased with this cute story. It was charming! I can't think of a better word to describe it. While there definitely was not enough physical interactions, I liked how well Quinn digs into the characters' emotional relationship! I'm looking forward to reading future books in the series.

Definitely not enough chemistry, and physical interactions (first/second/third base, home run, etc.). I think there was ONE kiss, and ONE sex scene. There were not sparks flying between these two characters, but I didn't quite mind the physical lack of chemistry because the pair has such good compatibility in general. But... this was a very un-steamy historical romance novel! Like if I had to give it a heat rating, one being the lowest and five being the highest, this book might get 0.5 to 1. I don't know if this is a Julia Quinn thing, or specific to this book, but BOOO!

Also, the ending kind of felt... abrupt. Don't get me wrong, I absolutely adored George and Billie's ending. But it felt anticlimactic! Especially with the subplot not being resolved in this book.


I recommend this book to historical romance readers! I can see why Julia Quinn is so popular - she really knows how to write a good love story and capture great characters.

4 stars. I can't wait to read more books from this series! I'd love to read Andrew's book next, or maybe Edward's. But I also really want to know about that subplot! This book didn't feel as resolved as it could have been, so I especially want to read the next books to know what happens to a certain specific character!