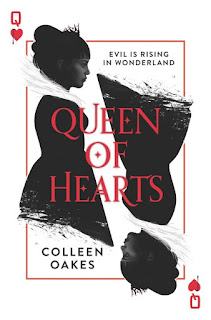 Queen of Hearts by Colleen Oakes
Book One of the Queen of Hearts Saga
Publisher: HarperTeen
Publication Date: May 3, 2016
Rating: 3 stars
Source: eARC from Edelweiss

As Princess of Wonderland Palace and the future Queen of Hearts, Dinah’s days are an endless monotony of tea, tarts, and a stream of vicious humiliations at the hands of her father, the King of Hearts. The only highlight of her days is visiting Wardley, her childhood best friend, the future Knave of Hearts — and the love of her life.

When an enchanting stranger arrives at the Palace, Dinah watches as everything she’s ever wanted threatens to crumble. As her coronation date approaches, a series of suspicious and bloody events suggests that something sinister stirs in the whimsical halls of Wonderland. It’s up to Dinah to unravel the mysteries that lurk both inside and under the Palace before she loses her own head to a clever and faceless foe.

Part epic fantasy, part twisted fairy tale, this dazzling saga will have readers shivering as Dinahs furious nature sweeps Wonderland up in the maelstrom of her wrath.

Familiar characters such as Cheshire, the White Rabbit, and the Mad Hatter make their appearance, enchanting readers with this new, dark take on Alice’s Adventures in Wonderland.

I had no idea this was an actual retelling/story based on Alice's Adventures in Wonderland! For some reason, I thought this was a prequel trilogy to Alice's Adventures in Wonderland. Either way, I was on board with this book. I didn't know much about it beforehand (which isn't a bad thing, in this case). Obviously I didn't like it as much as I'd hoped, but it was worth my time, and I think I may read the next book (and perhaps the third) in the series.

Dinah is the crown princess of Wonderland, the next Queen of Hearts. Her mother died years ago, leaving Dinah and her mad younger brother Charles with the King of Hearts (their father, and King of Wonderland). But the King has never liked Dinah - in fact, he has always hated her. When the King introduces a complete stranger to the palace, and says that she is his daughter and a Duchess of Wonderland, Dinah cannot accept this. Her new half-sister is pretty and fragile and delicate, and not at all like Dinah (or Charles). But there is something afoot in Wonderland, and it's all coming down to Dinah's coronation as Queen.

Dinah was a hot and cold character for me - sometimes I liked her, sometimes I didn't. In the very beginning, she's a bit spoiled and spineless, always afraid of her father but also trying to impress him. This is before he brings her half-sister Vittiore to the palace (fyi, I do not for a second buy this - that Vittiore is his daughter). When this happens, Dinah is pretty enraged. She absolutely hates Vittiore, especially because their father dotes on Vittiore and now openly hates Dinah. To Dinah, it's clear that Vittiore is weaseling her way into Dinah's place as Queen of Hearts. Right?

I liked Dinah more when she was enraged and ready to rip off her sister's head (sorry! It's true!). She seemed less ditsy and naive, and more aware and demanding (like a queen should be). Finally Dinah starts acting more like the queen she hopes to be, with more spine and fire. This Dinah, I liked.

I never read Alice's Adventures in Wonderland, so I really can't draw parallels from the original to this story, with a few exceptions. Cheshire is Dinah's father's chief adviser, and a slimy, deceitful man. The White Rabbit is Harris, Dinah's tutor and guardian. I have no idea who Wardley would be in Alice's Adventures in Wonderland, but Wardley is a boy that Dinah grew up with, whom she is in love with (sadly, I'm pretty sure he thinks of her as a sister). The Mad Hatter is Charles, Dinah's younger brother. He's insane and he makes cool hats.

I think I enjoyed the story, once I got into it (that took a while though). There is an undercurrent of dread woven throughout the story, and we slowly start to see Wonderland's issues as the story goes on. I was pretty invested and rooting for Dinah more towards the end. The end is not entirely shocking, but it's not a safe and "happy" ending. We can't expect the happy ending since this is the first book in a trilogy (I think it's a trilogy?), but the ending is cliffhanger-y. Which is why I'm curious enough to want to read the next book - the cliffhanger has me hooked! Agh!

Things I didn't really like: at first, I didn't like Dinah. She's spoiled and naive and so clearly trying to please her father, a father that does not love or even like her. He wants her off the throne, that's for sure. I wanted to punch him! And Vittiore too - she seems innocent, but I personally think she isn't the King's daughter at all (this is my *opinion*, and not something concrete). I had been hoping that Dinah would have Vittiore meet an untimely (or perhaps timely) end! Whoops?

The beginning of this book, maybe up until fifty percent, was pretty boring. I wasn't interested, I wasn't invested, I was barely paying attention. I'm not sure it has anything to do with my not having read Alice's Adventures in Wonderland, but there is that. Things started to get good when Dinah had a real purpose!

Hopefully we get to see more from the romance? I'd love to see Dinah have SOMETHING positive in her life - she has it bad, from start to finish (especially at the end of this book)!

I think the King, and Vittiore, and Dinah's hatred of them (which was justified) kind of poisoned the story for a while, but once the story grew to be about more than the King and Vittiore, I started to get more invested.

Ehhh. Well. This book was kind of meh for me. I'm giving it three stars, but I'm not sure I'd specifically recommend it. It's not that good, but it's not terrible either. If you weren't already interested, then it really might not be worth the time! The fantasy aspect is cool, and it seems like a good retelling (I can't really comment on that though, since I never read Alice's Adventures in Wonderland), but ehhh. Not a life-changing or must-read book.

3 stars. I actually think I want to read the next book - especially since it's technically already available (the first two books in the series were published by indie/small press before HarperCollins picked it up). I wonder if I could rustle up a copy of book two, somewhere on the Internet...