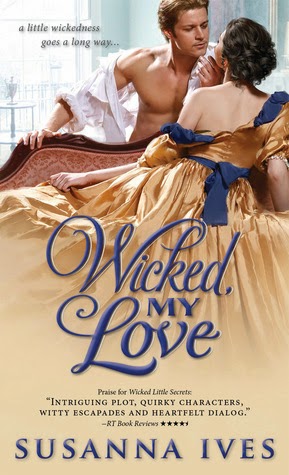 A smooth-talking rogue and a dowdy financial genius...

Handsome, silver-tongued politician Lord Randall doesn't get along with his bank partner, the financially brilliant but hopelessly frumpish Isabella St. Vincent. Ever since she was his childhood nemesis, he's tried—and failed—to get the better of her.

When both Randall's political career and their mutual bank interests are threatened by scandal, he has to admit he needs Isabella's help. They set off on a madcap scheme to set matters right. With her wits and his charm, what could possibly go wrong? Only a volatile mutual attraction that's catching them completely off guard...

I liked this one - don't be fooled by the slightly low rating. I felt like this one was more of a 3.5-star novel, rather than 3-star one, but when rounding, it gets 3 stars (and not 4 stars). I liked it a lot! But probably not enough to give it 4 stars. There were some large things that I didn't really like, but overall, I liked the book. I loved Wicked Little Secrets (book one), and I thought this one was good, so I'll definitely be reading more of Ives' books in the future.

This book (Wicked, My Love) does not have any crossover from the first book (Wicked Little Secrets), which was actually kind of nice. At least, none that I can remember. If it did, I obviously missed it - and none of the characters from Wicked Little Secrets popped up in this book. In any case, I liked that this book didn't have anything to do with its predecessor in the series, for a change.

Randall and Isabella grew up together, bickering and fighting even as grown adults. Randall is a viscount, living a privileged life from birth. Isabella's father was a brilliant merchant, but never seemed to have time for Isabella; Isabella became determined to be something worth impressing her father. Isabella is a brilliant banker, excellent with numbers and problems and solutions and ledgers. She and Randall and a third partner do banking business together - until that third partner messes up, landing Randall in a huge scandal with another noble, who is plenty guilty in the whole scenario. This is a case of Randall and Isabella putting aside their differences to find out the truth, and save their business and good names.

I love the protagonists, Randall and Isabella. Mostly, I like Randall. He is a flirtatious and suave young man, but underneath those layers, he is very serious, devoted, determined, hardworking, loyal. He wants to hold prestige in Parliament, and not because he holds the title of viscount, but because he worked hard to earn the recognition and votes. He's driven, and he cares about things more than he lets on.

Isabella, on the other hand, is a very serious and intelligent woman. She is terrible at picking up jokes, wit, sarcasm, etc. She doesn't really understand dirty jokes or innuendos. Randall teases her all the time and she knows he's teasing her, but not necessarily how. I'm not sure if I really liked Isabella - there were some things about her that pissed me off - but ehh. She's okay.

This book is all about trying to restore the bank and its business - some sold the third partner fraudulent stocks. Isabella and Randall journey across the country (or so it seems) to hunt down person after person. Meanwhile, the line between hate and love seems to grown thinner and thinner.

I love the hate-to-love romance stories - they're usually very passionate and have plenty of banter between them. I liked the chemistry-filled romance, with plenty of sizzle and spark between Randall and Isabella.

The novel is a good read, overall. I had issues with the female protagonist, so that's why this one got a lower rating than you would think. Read on.

I'm not sure if I like Isabella or not. She's an example of a very academic/book-smart individual, with little common sense. She is so thick-headed and slow at times. I get it, we can't all have common sense... but like... a smidgen? She would vastly benefit from a drop of it.

There's a subplot involving women's rights - Isabella wrote a book on business and smart investing or something like that, and it is a revolutionary novel in women's rights, in this book. Don't get me wrong, I'm all for women's rights and whatnot (duh). But I wasn't a huge fan of this additional plot. It didn't do anything for me - if anything, it agitated me, and it definitely agitated Isabella (she hates attention and crowds).

Isabella makes some seriously stupid decisions in this book. She never listens to Randall - and again, I'm all for women's rights, but if someone (anyone, man or woman) has a good/smart idea that will keep everyone safer... you should probably do it. No need to stick up your nose and decide NOW is the time to be throwing women's rights around. I'm thinking of a specific instance in this book, when something like this sort of happened. Honestly, Isabella is both stupid and pig-headed. It's not going to break the world if you listen to a smart idea that happened to be thought up by a man - it won't go against your feminist code.

Anyway. This was kind of a big thing for me. I like Randall, I like Isabella & Randall... but Isabella? Meh. I don't know if I like her or not.

Okay despite the fact that I didn't really like Isabella, I really enjoyed the book, so I WOULD recommend it... just not as much as I might recommend other historical romance novels. This one isn't a must-read, unless you've previously enjoyed Susanna Ives' books (I really liked Wicked Little Secrets).

3.5 stars -> rounded down to 3 stars. I liked this one - though not as much as I had hoped - and I hope there will be more Wicked books (additions to this series).