Review: It Started With A Scandal by Julie Anne Long 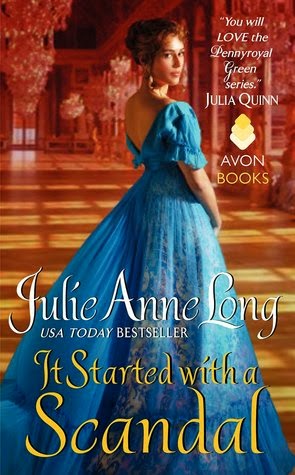 Lord Philippe Lavay once took to the high seas armed with charm as lethal as his sword and a stone-cold conviction: he'll restore his family's fortune and honor, no matter the cost. Victory is at last within reach--when a brutal attack snatches it from his grasp and lands him in Pennyroyal Green.

The bold and gentle Elise sees past his battered body into Philippe's barricaded heart...and her innate sensuality ignites his blood. Now a man who thought he could never love and a woman who thought she would never again trust must fight an incendiary passion that could be the ruin of them both.

This is my first Julie Anne Long read, thanks to the book-pushing of Racquel (thank you, girl!). She and I both love historical romance novels, and recently, we swapped our favorite authors. I consider myself a bit more of a "newer" historical romance reader compared to Racquel, and when she got really excited about all things Julie Anne Long, I knew the author had to be some sort of awesome. So I requested this particular book from Edelweiss - I haven't read the other nine books in the series. But let me tell you: It Started With A Scandal is nothing short of wonderful, heartwarming, steamy, and entertaining.

Elise is a former teacher at an Academy. She was removed from her position for speaking out of turn. Years ago, her own family shunned her, because she got pregnant (unmarried), and the man left her. So Elise is now forced out of a job because she misspoke. She has a fake reference from the prestigious Redmond family (who owned someone a favor, and that someone used the favor for Elise). Elise secures a position as Lord Lavay's much-needed housekeeper.

Lord Philippe Lavay was attacked and is injured. He does not seem to care much about the state of his house, because it's in terrible shape. The few servants are lazy and rarely clean anything. Lord Lavay is tormented by his lack of funds, his injuries, and his dwindling French family honor and name. Elise is determined to turn his house into a home, and in doing so, she finds her way into everyone's heart... including Lord Lavay's.

Gah! I love the love stories that involve a hate-to-love dynamic. Lord Lavay is rather grouchy and unapproachable in the beginning of this book - for most of the book, actually. Personally, I find that quite endearing... and Elise found it intriguing. She didn't hate or dislike him at first - in fact, she's always been curious about him, and wanted to help him.

I love how kind and sweet Elise is - and yet, she is quite fiery and outspoken. She has to filter what she is thinking and says, and sometimes things slip through that filter. She lost her teaching position because she said something that could be taken rudely. But really, she's just very honest and direct. And nice. She has a big heart and a kind spirit.

And then there's Lord Lavay (Philippe), who is quiet and grouchy, irritable and menacing. He really isn't all that bad, but he certainly lets everyone think that he is. He doesn't let anyone in, doesn't communicate with his grandfather or sister anymore, since the attack. It's like he lost a bit of his pride, and not just money or honor.

Philippe and Elise together... fireworks. They dance around each other, clash at times, and keep the dance going. Elise never tries to stop helping Philippe, even if he is a grouch about things, like taking tea with pain relievers in them. I love their interactions. I love their dialogue. It's not love at first sight, and not quite lust at first sight either (Philippe had just thrown something). I love the development of their relationship - it's slow and gradual and beautiful. And the chemistry - the chemistry is sizzling hot in this book. You can feel the tension between Philippe and Elise.

There is so much to this book besides romance! Elise has a son, a "bastard", and the author focuses on Jack's growth sometimes as well. When Philippe finally meets Jack (this isn't until about halfway into the book), the author then has Philippe and Jack spending time together. This could be because the author wants to show that Philippe likes Elise, or because Philippe really likes Jack (or kids in general), or because the author wants to show Jack's growth. Either way, I actually really liked the sub-focus on the little boy. I liked Jack.

In general, overall, I really, really liked this book. It was near-perfect. I loved the story, the romance, the characters.

I soooo saw a certain decision made by Elise at the end of the book. Totally saw it coming - it HAD to happen. However, I felt like the ending in general was a bit quick, and then the final scene was not enough. I wanted a peek into the future, or something like that! I mean, we get a view into the future, but I think I just wanted a little more Philippe/Elise in the end, one-on-one, maybe. But anyway, small thing. I LOVED the ending, in general.

YES! I loved this book! I'll probably be shelving this one in my "Favorite Historical Romances of All Time" category. It's getting four stars (4.5, really), but it's definitely a favorite. If you're a historical romance fan, definitely give this book a chance!

4.5 stars -> rounded down to 4 stars. I definitely want to go back and read the other nine books in the series (or as many as I can)! And I'll be keeping an eye out for future Pennyroyal Green books, and anything else by this author. Thank you for the recommendation, Racquel!