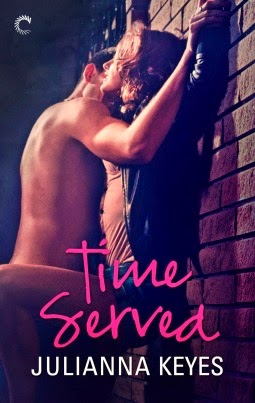 Dean Barclay had nothing to do with my decision to flee my old life, but he is 100 percent of the reason I vowed to never look back.

I've never forgotten how it felt to follow Dean—dangerous, daring, determined—away from the crowd and climb into his beat-up old Trans Am. I was sixteen and gloriously alive for the first time. When I felt his hand cover my leg and move upward, it was over. I was his. Forever.

Until I left. Him, my mom, and the trailer park. Without so much as a goodbye.

Now Dean's back, crashing uninvited into my carefully cultivated, neat little lawyerly life. Eight years behind bars have turned him rougher and bigger—and more sexually demanding than any man I've ever met. I can't deny him anything…and that just might end up costing me everything.

Woah. Woah woah woah. I honestly did not expect to enjoy this novel THAT MUCH. In fact, I would never have even have heard of this book, had it not been for the lovely Dear Author's tweet about it popping up on NetGalley. I took her recommendation and got the book... and boy do I NOT regret that whim. It threw a wrench in my packed March review copies reading schedule, but I could be happier that it did.

Rachel Moser left her trailer park life behind and went to college - and made something of herself. Now a successful and driven lawyer in Chicago, she doesn't expect to ever revisit that life again, or to interact with anyone from the town. But Dean Barclay, the boy she left all those years ago, is now in Rachel's new town. Recently out of prison (on parole), he works in a warehouse and boxes in a gym nearby. Rachel's organized, structured life turns upside down. Dean is a wildfire, and a new case at Rachel's job isn't helping her. She could lose everything all at once if she's not careful.

Rachel is a very hard-working, diligent, driven young woman. She puts her heart and soul into her job, and really cares about her clients. She works seven days a week, and has a schedule of events for every day. She's constantly checking her phone for messages, emails, texts about work. Everything, to her, is about work. She came from such meager and poor ends, and now that she is successful and well-off, she is determined not to lose her comfortable life. She doesn't want anyone to know about her past, before she put herself through college and worked her way up to where she is.

I really liked Rachel. I feel like I could identify with her somewhat (though I'm not a twenty-eight-year-old lawyer). She's worked hard every day of her life, coming from a very poor family and destitute background. She is very intelligent, very caring, very selfless. She is ordered and precise, which I totally understand. I'm pretty OCD myself, and so if a hurricane like Dean Barclay came back into my life and with ten times the force... well, I'd be wary too.

At first, Rachel is adamant against seeing Dean. They meet randomly, but then he singles her out and gives her his address and number. She pleads to him to leave her alone, but in her heart, she knows she doesn't want to leave him alone. She left him all those years ago, and she asks him to forgive her, but it seems like he is out for blood. Or sex. He missed her, all those years in jail. See, he and some of his friends robbed a bank just shortly after Rachel left Dean. He did something incredibly dumb and impulsive. I like how the author doesn't try to make it seem like it was an accident, or it was circumstantial, or that Dean is a good person who got caught in the wrong place at the wrong time. There was not sugar-coating this event, on Rachel's part and on Dean's part.

Eventually, Rachel gives in, and goes to Dean's place. He says he wants to get her out of his head. So they get intimate. She leaves, but she can't stop thinking about him. Apparently it's the same thing for him. So they meet again. And then fight. And meet again. And disagree. The story goes on, showing the progression of their new, tentative non-relationship relationship. Rachel realizes that she really cares about Dean towards the end of the book, but she also realizes how much he's been hurting her, and she him. I like how their relationship isn't a typical progression of "like" to "love", or "lust" to "like" to "love". It goes from irritation to lust to more lust to distrust to trust to like to love. Kind of. It takes forever for them to build trust, because they keep hurting each other (not with other people, but in different ways).

So there is a ton of depth to Rachel and Dean's relationship. There is a ton of depth to both characters, too. I already talked about Rachel, but Dean is also a very well-rounded character. He spent years in prison, and is now on parole. He wanted to make Rachel hurt (emotionally) as much as he did, when she left him. And when he sees her, in the beginning of this book, that is exactly what he plans on doing. Except that nothing goes according to his plan. He's rough, demanding, an alpha, totally macho, but he falls for Rachel all over again.

The progression of feelings and emotions was pretty well-written, in my opinion, and I really REALLY liked the chemistry and sizzling scenes in this novel. There were plenty of them, and guys, this author knows how to write some seriously steamy scenes. There were at least three hoooot scenes that had me staring at the pages. That being said, this novel is NOT for the prude or those that don't like seriously explicit sex or sexual activities. Because, you're in for a lot of it, in this book. Lots of very well-written scenes, lots of good steamy times. Lots of explicit stuff. So. Just so you know.

I loved the chemistry. I loved the romance. I also loved the story. I really liked watching Rachel and Dean pull and push each other. Dean is a bit controlling and demanding, which bothered me initially, but eventually, I liked when Rachel also got control of the non-relationship relationship. I liked the non-romance-related stories too - Rachel's case, which a co-worker is currently giving her a run for her money. Rachel also finally goes back to Riverside, which is a disaster and a blessing in disguise. The romance is huge in this book, but the other stories are really important too.

I loved how Rachel grew as a character. Dean too. I can't say too much without being too specific and giving away the ending in several areas, but Rachel makes some serious decisions in the end of this book, and I was taken by surprise. Except I also wasn't - I knew something had to give, in many different aspects of Rachel's life. I'm really happy with her choices, though I would definitely have been scared out of my mind if I did what she did.

Believe it or not, there were things that I didn't like about this book, but they weren't huge. Actually, it was more like one thing. I didn't like this ONE scenes, when Rachel is panicking, and Dean tries to calm her down... I didn't like what he did to make her panic, and what he tried to do to make her calm down. The whole situation was his fault, and then he handled her panic badly, in my opinion.

Of course, this is ONE scene. And in real life, men do stupid things like this all the time (so do women, but in this particular case, it was Dean who messed up). So. Take this "dislike" as you will.

To romance readers - YES! It's not erotica, so you don't have to be an erotica reader to enjoy this one. I really like romance novels, but mostly historical romance novels. This contemporary romance novel is really, really great. Probably a favorite of the year - so far, it's winning (but we're in early February, so, it's a bit early). But if you love romance novels, definitely give this one a chance. It's really cheap, so you're getting a great deal!