Review: The Distance Between Us by Kasie West 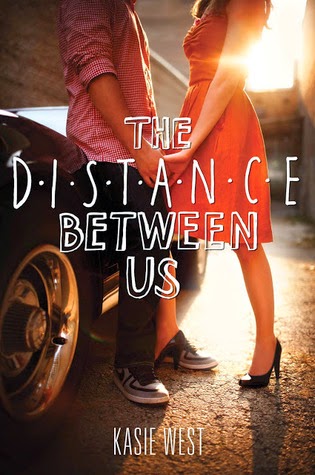 Seventeen-year-old Caymen Meyers studies the rich like her own personal science experiment, and after years of observation she’s pretty sure they’re only good for one thing—spending money on useless stuff, like the porcelain dolls in her mother’s shop.

So when Xander Spence walks into the store to pick up a doll for his grandmother, it only takes one glance for Caymen to figure out he’s oozing rich. Despite his charming ways and that he’s one of the first people who actually gets her, she’s smart enough to know his interest won’t last. Because if there’s one thing she’s learned from her mother’s warnings, it’s that the rich have a short attention span. But Xander keeps coming around, despite her best efforts to scare him off. And much to her dismay, she's beginning to enjoy his company.

She knows her mom can’t find out—she wouldn't approve. She’d much rather Caymen hang out with the local rocker who hasn't been raised by money. But just when Xander’s attention and loyalty are about to convince Caymen that being rich isn't a character flaw, she finds out that money is a much bigger part of their relationship than she’d ever realized. And that Xander’s not the only one she should’ve been worried about.

Well, that's that. I have read all four of West's novels, all within less than five months of the year. You can read my reviews of On the Fence, Pivot Point, and Split Second. I'm happy to say that I am four for four with West's books! And now I really, really can't wait to read The Fill-In Boyfriend.

This counts as my Pili-pushed read of October! Be sure to read all of my Pili-pushed reviews. I'd been meaning to read it anyway, as it has been on my TBR list for quite some time, but Pili really, well, PUSHED me towards it! Especially since I've binge-read West's other three novels this year. So, The Distance Between Us!

Caymen knows all about rich people, and she doesn't have to do much to really avoid them. After rich-boy Xander comes into her mom's doll store for a doll for his grandmother, her perception of rich people changes, because he keeps coming back. He keeps up his interest, and pretty soon, he and Caymen are seeing each other pretty often. But will he stick around? Is Xander the problem?

Let me start by saying that I really like Caymen. She is so incredibly sarcastic - we would get along so well. Some of the things she says, the fact that she lets nothing go... yeah, we'd either love each other or hate each other (I'm going with the former). I totally related to her on many levels, sarcasm included. The not-so-well-off thing as well. Being scared of letting yourself get close to someone. Yes. Yes yes yes.

I really like Xander. He's rich, he's slightly stuck-up because of it, but I think he's a down-to-earth person (despite being slightly stuck-up). If that makes sense. He's incredibly sweet and considerate and thoughtful and good-looking and physically fit and everything I want in a boy and everything that I know can't come in a complete package and AGH WHY DO BOYS IN REAL LIFE NOT COME WITH ALL OF THESE OPTIONS. It's times like these when fiction makes me sad... because it's not real. Waahh.

I love the dynamic of this book. Caymen and her mother run a struggling doll store, and so Caymen spends most of her free time at the store, helping out. Xander, on the other hand, is super rich, has everything at his fingertips. But it's not like his life is easy peasy squeezy. Both teens are extremely different, but both teens are quite similar.

The conflict of this story does not just deal with Caymen struggling with her feelings for rich-boy Xander. The doll shop has not been doing well at all, and Caymen's mother has not been herself lately. Caymen wonders about her unknown father. Throw in Caymen's best friend's boyfriend's band's lead singer hunting for Caymen's attention, and you've got a pretty interesting set of conflicts.

I love the romance in this book. No love triangle, so don't worry about that, no matter how it sounds in the synopsis. Xander and Caymen are sweet and spicy together, very cat-and-mouse-like. I love the way West crafts the romances in her books.

The ending of this novel is very sweet. I know, I've used the word sweet a lot. I liked the ending, despite the fact that it was a little weird. Not in terms of the romance, but in another aspect of Caymen's life. Nevertheless, I was satisfied with the ending, and this book in general!

Like I mentioned above, the ending was a bit strange. Not in terms of the romance, don't worry about that. But in another aspect of Caymen's life, I didn't quite like how West resolved the issue. She threw something new at readers, at the charity benefit, towards the end. I almost saw it coming, but I didn't really like how it fit the story. Sort of.

I liked the ending. I liked how West wrapped things up. But I totally could have seen this book ending differently, in terms of that one aspect. You'll have to have read (or will read) the book to know what I'm talking about. Trying to be vague on purpose!

I love West's books. I love the romance in her books especially. Yes, this is contemporary. On the Fence is contemporary as well. I'm not a contemporary person, but I loved both books. West is definitely a go-to contemporary writer for me, in addition to Jennifer Echols, and Sarah Ockler!

4 stars. I really liked this book! I'm so glad that Pili really pushed this one on me - I really had every intention of reading it, but she made it shoot up my TBR list! And now I have successfully binged on all of West's books - and rated them no lower than four stars each. Impressive!