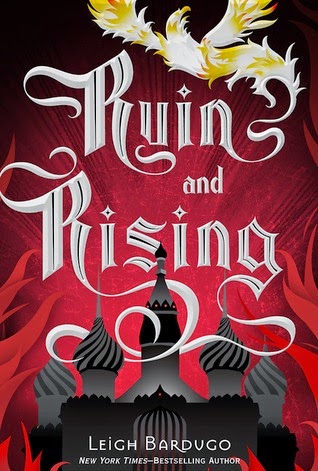 The capital has fallen.

The Darkling rules Ravka from his shadow throne.

Now the nation's fate rests with a broken Sun Summoner, a disgraced tracker, and the shattered remnants of a once-great magical army.

Deep in an ancient network of tunnels and caverns, a weakened Alina must submit to the dubious protection of the Apparat and the zealots who worship her as a Saint. Yet her plans lie elsewhere, with the hunt for the elusive firebird and the hope that an outlaw prince still survives.

Alina will have to forge new alliances and put aside old rivalries as she and Mal race to find the last of Morozova's amplifiers. But as she begins to unravel the Darkling's secrets, she reveals a past that will forever alter her understanding of the bond they share and the power she wields. The firebird is the one thing that stands between Ravka and destruction—and claiming it could cost Alina the very future she’s fighting for.

The end is near. For this trilogy, I mean. In fact, this is the end. And what an ending it was. What a trilogy this was. From the start, I wasn't crazy about the series. Sure, I liked books one and two, and gave each four stars. But I wasn't dying to read each book as they came out. I won an ARC of book one, back when I was just a reader (not a blogger). I read it because Dani at Refracted Light pushed Shadow and Bone on me personally- and I really enjoyed the book, so that was a good thing! At the time, I really, really wanted to read book two. But I read Siege and Storm recently, in January - not immediately upon publication. Even this book - I read it in August, and my review is being posted whenever (probably towards the end of the year).

What I'm trying to say is that I was never entirely invested in this series. Sure, I enjoyed the books. But I wasn't going nuts to read book two or book three, or even book one. I know many people were incredibly disappointed by this book - they were so hoping for one thing or the other. Honestly? Maybe if I were more invested in the series, I would have been part of the one extreme or the other. But it appears that I didn't care as much as most did, so I wasn't too disappointed or too ecstatic.

In this final novel, Alina must find the firebird to retain all three amplifiers and find the power and will to defeat the Darkling. At the moment, she's very weak, after the stunt at the end of book two. But with the help of her ragtag team, Alina journeys to find the firebird, and save Ravka.

I must say, Bardugo's storytelling is AMAZING. This story, across the three books, is stunning. Creative and rich - it's hard not to get swept away. I'll be honest: I got confused a lot and forgot a lot of names and didn't care enough to look them up in the other books, but I found that it was okay. Bardugo has a way of telling the story and describing things and throwing names out there but making sure that her readers won't be completely lost or not able to understand the story. At a bare minimum, you'll know what's going on. I had a little more than the bare minimum to work with, but I'm glad that Bardugo made it easy to read these books.

The world-building is incredible. This series is fantasy, so the world is purely from Bardugo's imagination. This book really showcased Bardugo's brilliance, in my opinion. The world-building, the writing style, the imagery... flawless! I love the Russian influence - Russian, I believe? Eastern European? Whatever it is, I love it!

The plot was so complex and twisty and weird and sad and terrifying and exciting! I feel like it was hard to be happy at any point in this series. There are rare pockets of positive moments in this book, rare moments of humor, and I love those moments. Sometimes, some of the things the characters say are hilarious. But back to the plot. Bardugo keep throwing obstacle after obstacle at Alina, never giving any of her characters a break. Poor Alina. Poor Mal. Poor Nikolai. Those three suffer the most, in my opinion. And maybe Baghra. And the Darkling.

The romance... well, I can see why people hated this book for the romance. But from the start of the series, and the start of this book in particular, I just knew. That's all I'm saying. The ending is a fitting ending, romance and all things Ravka. I liked the ending.

Meh. This book didn't make me cry, or laugh with delight, or give me a feeling of satisfaction. I love the imagery and fantasy world that Bardugo has created, but I didn't necessarily love or hate the plot, the romance, the characters. Like I said in the beginning of the review, I was never completely invested in the series. I needed the push to read book one. I needed a push to read book two. I wanted to read book three because goshdarnit I will finish the series if I've already read the first two books!

I liked Alina, but I wasn't necessarily rooting for her. I never really liked Mal, though I liked him in this book. I LOVED Sturmhond/Nikolai - he didn't get the ending he deserved. That particular character/plotline didn't get justice (or justice wasn't done to them, or however I should put that). I'm not exactly talking about the romance.

I guess I'm just feeling a sense of apathy. But this apathy isn't totally towards this one book - I'm pretty detached from the entire series. I *like* the series, but I don't love it. I enjoyed the books, but I'm not dying over them or fangirling over them or anything. You feel?

And honestly, in my opinion, this is a great series to binge-read! If you haven't read any of the books, I think it would be an excellent idea to set aside some time and just binge the whole series. It's a beautiful fantasy series! I just wish I were more invested. Especially since my blog name appears in both book one and book two's paperback editions.

3 stars. Maybe 3.5 stars? Not that Goodreads, Amazon, and Barnes & Noble do half stars. I liked this book! It was an interesting conclusion novel! Not the epic showdown I expected, but also not what I expected in terms of the twists and turns. Bardugo is a master when it comes to that. I'm really glad that Dani at Refracted Light Reviews pushed me towards this series. It all started with a Facebook post about a book trailer!