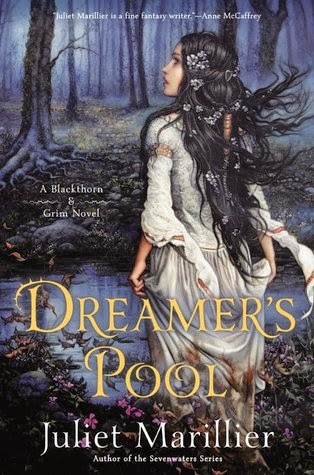 In exchange for help escaping her long and wrongful imprisonment, embittered magical healer Blackthorn has vowed to set aside her bid for vengeance against the man who destroyed all that she once held dear. Followed by a former prison mate, a silent hulk of a man named Grim, she travels north to Dalriada. There she'll live on the fringe of a mysterious forest, duty bound for seven years to assist anyone who asks for her help.

Oran, crown prince of Dalriada, has waited anxiously for the arrival of his future bride, Lady Flidais. He knows her only from a portrait and sweetly poetic correspondence that have convinced him Flidais is his destined true love. But Oran discovers letters can lie. For although his intended exactly resembles her portrait, her brutality upon arrival proves she is nothing like the sensitive woman of the letters.

With the strategic marriage imminent, Oran sees no way out of his dilemma. Word has spread that Blackthorn possesses a remarkable gift for solving knotty problems, so the prince asks her for help. To save Oran from his treacherous nuptials, Blackthorn and Grim will need all their resources: courage, ingenuity, leaps of deduction, and more than a little magic.

I've never read anything by Marillier, but I've heard such wonderful things about her and her books. I love fantasy, and there are some adult fiction writers whose fantasy I've always wanted to read. Marillier is one of those authors. I have no doubt that I will be reading more of her books (pre- or post-published) in the future!

Just so we're clear - this book is NOT Young Adult fiction, it's adult fiction. The protagonists are NOT young adults. Blackthorn is probably in her late twenties, Grim is probably about the same (or older), and the prince is twenty-two and about to be married (so *maybe* he could be considered a young adult. Maybe. But not really).

Blackthorn has been granted escape from prison by exchanging her desire for vengeance for her services to the services of the people of Dariada. There, with a former prison-mate, she will serve as a wise woman (basically, a healer). Meanwhile, the prince of Dalriada is getting ready to become betrothed to a lady Flidais, whom he has fallen in love with through their letters. An accident in Dreamer's Wood causes one of her maids to drown in Dreamer's Pool, and the lady is not the same after the drowning. The prince suspects that there is something wrong with the lady, and enlists Blackthorn and Grim's help in the matter. Something is amiss, and it will take some wit and magic to figure it out.

At first, I thought this book was all about Blackthorn, an angry woman who has spent a year in prison for trying to go after a nobleman who has been raping and impregnating innocent woman. But this book is also about Grim, a quiet and gruff man who has been quietly serving his sentence for an unknown crime. And it is also about a young prince who believes in romance and dreams and does not have a taste for blood sport and other things that princes should love. This book tells the story of all three of these people, and how their paths intersect.

I love this book. I love each character's story. I think the prince was my favorite perspective to follow - which is surprising, because the book starts with Blackthorn's, then Grim's, then Oran's (the prince). Usually, I like the character whose perspective I've seen first the most. But I liked them all!

Blackthorn is bitter over her past, and she has every right to be. She hates that she has to spend seven years in the service of those who need her help, before she can seek her vengeance. But she does a world of good for the people of Dalriada, especially the prince. Without her help, the situation with lady Flidais would not have been solved.

I'm glad that Blackthorn let Grim stick with her, and that Grim stuck around for as long as he did. Don't get the wrong idea - they are NOT lovers, or in love, or anything like that. They are platonic, friends if anything, but not really friends? They trust each other, they work together well, they make an excellent team.

The romance lies in the prince's story, but even that is not really romance... the romance in this book is very subtle and very not-so-important, compared to the other main plots of the book. Oran is totally in love with the lady who wrote him letters, but the lady who appears to him, the lady who went through a traumatic experience when her maid drowned in Dreamer's Pool, is not the same lady. His notions of romance and dreams of love are splintered when he realizes that he will never have that kind of marriage.

So there is a mystery to this book - I could not WAIT to find out how things would end. What is wrong with Lady Flidais - is she an impostor, or did she deceive the prince in her letters by having a scribe write them, or is she just completely traumatized over the entire experience of traveling to Winterfalls and then her maid drowning, etc.? I knew the ending would have to be all sorts of epic, and I was not disappointed.

The fantasy of this book is flawless. Wait - that makes it sound like the fantasy is part of this book, but that's wrong, because the fantasy IS the book. The world-building is beautiful and carefully constructed and excellent. I love the fantasy world that Marillier has created. It isn't explosive and remarkable and epic, but it is intricate and haunting and fascinating.

This book wrapped up really neatly, so I'm interested in seeing how this series continues. Hopefully we get to see how Blackthorn continues to struggle with her seven-year-sentence against vengeance. Maybe she will get a happy ending, at the end of the series. One can hope!

I so would! I loved this book by Marillier, so I definitely want to read more of her books. I always hear about her amazing fantasy and breathtaking romance - I was hoping for more of that romance in this book, but somehow, with the way this story was woven, I wasn't disappointed. Fantasy in adult fiction - for those of you who love this, check out this book!

5 stars. Well deserved, well earned. I'm so glad I decided to give this book (and author) a try. If you're interested, there is a giveaway happening on Goodreads until October 28th!