DEAR READERS: Originally, I gave this book a three-star rating, because of the ending, and the lack of information provided about whether this book was a standalone or part of a series. But, as you can see in the comments, the author has brought to my attention the fact that this book is book one of a series.

That being said, this book will receive four stars - it's unfair for me to rate a book so low when I know now that my biggest problem with the book may be resolved later in the series (because this book is in fact, part of a series). I hope this makes sense to everyone. I hope no one thinks that I am finicky and indecisive. This doesn't happen often. But I always welcome new information that may change my opinion on a book. If I EVER have the wrong idea about something, or lack information about something, someone please let me know! 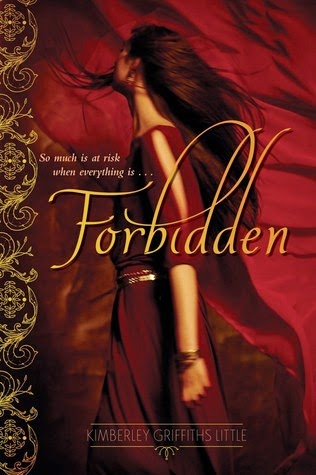 In the unforgiving Mesopotamian desert where Jayden’s tribe lives, betrothal celebrations abound, and tonight it is Jayden’s turn to be honored. But while this union with Horeb, the son of her tribe’s leader, will bring a life of riches and restore her family’s position within the tribe, it will come at the price of Jayden’s heart.

Then a shadowy boy from the Southern Lands appears. Handsome and mysterious, Kadesh fills Jayden’s heart with a passion she never knew possible. But with Horeb’s increasingly violent threats haunting Jayden’s every move, she knows she must find a way to escape—or die trying.

With a forbidden romance blossoming in her heart and her family’s survival on the line, Jayden must embark on a deadly journey to save the ones she loves—and find a true love for herself.

Set against the brilliant backdrop of the sprawling desert, the story of Jayden and Kadesh will leave readers absolutely breathless as they defy the odds and risk it all to be together.

This book should have gotten five stars from me. It was well on its way to doing so, trust me. I had been waiting for this book for months, and then I won an ARC from the author, and then eARCs were uploaded on Edelweiss for bloggers to access and basically, I've been dying to read this one (even though I've had a copy for quite some time now). One thing pissed me off and broke my heart, and that one thing is why this book gets three stars, instead of five. Because it deserved five... until that one thing that happened.

Jayden has been betrothed to Horeb since they were children. When his older brother is killed, Horeb is now the heir to this one tribe, making him like the "crown prince". Jayden will marry him, and the two tribes will be joined. But Jayden doesn't love him, or even like him. She falls in love with a mysterious boy of secrets, who appears in the desert when the tribes are leaving that area of the desert to go to another. But Jayden's tribe is in trouble, as her father is poor, and Jayden must marry Horeb.

I really love the setting of this book. I have a seriously religious background, and I know the Bible very well. I'm not saying you have to be religious to know the places and names and whatnot, but it helped me. This is historical fiction, as it is set in Mesopotamia, 1759 BC. I LOVE this time period. I also LOVE desert-setting novels. Sarah Beth Durst's Vessel is a really great example of awesome desert fantasy.

I really felt for Jayden. At many points in this book, she feels - and is - helpless. She is just a girl, just a female desert-dweller. She has no power over her upcoming marriage, no control over her life. Her father is poor and needs the connections and wealth that will come with the union. Yet Jayden stays strong throughout the novel - through death, despair, growing love, threats, abuse, etc. She is an amazing protagonist, and a strong character.

The story itself was very interesting - I found that I could not put the book down. I love the rich setting, the culture, the world-building, but I especially loved the story Little crafted. It's not just about Jayden's betrothal to Horeb, or her growing feelings for Kadesh. So much more is at stake - cities falling, tribes splintering, Jayden searching for one sister while losing another... this story is definitely engrossing and heartbreaking and fabulous.

The ending is brutal. The ending just isn't fair, for a standalone - but I know now that this book is the first of a series. The ending is so, so heartbreaking, unjust, depressing, and I am not a fan of the ending... but it helps to know that the story will continue.

Yes, I would. I LOVED this book - up until the last fifty pages. So, yes, I would totally recommend this book for the first 350 pages! Once you get to the ending, just be assured that the series will continue. It will be okay. Hopefully.

4 stars. I'm upset about the ending - it's not only that it was heartbreaking, but it was so unfair. I'm not okay with it.  It was too cruel - and then too open-ended - for my tastes. However, knowing that this book will be part of a series has definitely lightened my heart - and changed my opinion and rating.