Review: The Viscount Who Lived Down the Lane by Elizabeth Boyle 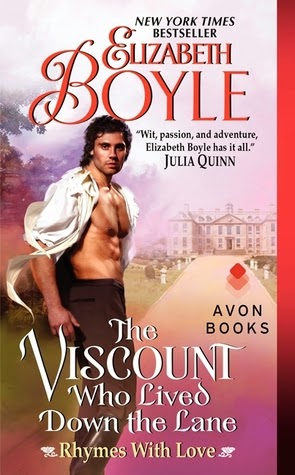 The Viscount Who Lived Down the Lane by Elizabeth Boyle
Book Four of the Rhymes With Love series
Publisher: Avon
Publication Date: October 28, 2014
Rating: 4 stars
Source: eARC from Edelweiss

She has no desire for love...

As she arrives in Mayfair, Louisa Tempest is horrified when her incorrigible cat bolts from the carriage and dashes into a neighbor's house, where she comes face-to-face with the reclusive Viscount Wakefield. But even more dismaying than his foul temper is the disarray in which she finds his home. Convinced his demeanor would improve if his household were in order, Louisa resolves to put everything to rights.

...until she meets the viscount who lives down the lane.

Much to his chagrin, Wakefield finds it impossible to keep the meddling Louisa out of his home, invading his daily life with her "improvements," and his nights with the tempting desires she sparks inside him. Wounded in the war, he's scorned society ever since his return . . . until Louisa opens the door to his heart and convinces him to give love a second chance.

Okay, it's official - Elizabeth Boyle is a go-to historical romance writer for me. She joins Elizabeth Hoyt, Tessa Dare, and Maya Rodale... there are quite a few other authors whose books I have enjoyed, but these four ladies stick out in my mind. Their books are awesome!

By the way, ugh, that cover. I'm not the biggest fan. It's not doing much for me, aesthetically or otherwise. Anyway.

Louisa Tempest and her twin sister Lavinia are moving to London for Lavinia's first Season. The late Lady Charleton wanted them to have a Season, but Louisa isn't interested. Instead, she finds mischief in trying to tidy up her next-door neighbor Wakefield's decrepit home. Wakefield, with a injured leg, broken heart, and possibly PTSD from war, doesn't need a woman messing is home, firing his cook, hiring another, finding servants for him... but sooner or later, he finds himself rejoining society, thanks to one meddling woman.

At first, I really did NOT like Louisa, or her ridiculous cat, Hannibal. Louisa did not seem to have any respect for anyone, and she made no attempt to control her cat. But as the story went on, I decided that I really liked the cat, because he kept escaping to Pierson's home, and it always made things interesting between him and Louisa. Eventually, I grew to like Louisa and her brash nature. She isn't your typical society lady - while she is of gentle birth, her family isn't the most high-regarded.

So eventually, I liked Louisa. I always really, really liked Pierson. He's grumpy most of the time, or that's the way things come across. He was sent home from war, injured, and without his friend (who died to save him), and then his fiancee left him, and things were just really sad for him. Not to mention that war probably traumatized him. He has a lot going on, but he also does a lot of avoiding and hiding and almost wallowing. Someone as strong-willed as Louisa would TOTALLY bring him out of his shenanigans.

The romance is so wonderful and light in this book. This book in general is very witty and funny and lighthearted. The chemistry between the two characters is always sizzling, and it's honestly adorable to see them fall for each other. It happens so gradually and progressively, I love it.

I thought the plot - other than the romance - was a bit lacking, but there was one, I suppose. We never figure out what was so scandalous about Louisa and Lavinia's mother, and why they didn't want whatever secret to get out in public, until the end. Which is an interesting plot twist, and I suppose that IS the leading story - how Louisa and Lavinia will fare in London, with such a secret. Turns out, more people than they thought, know about their mother.

Overall, I really enjoyed this book! Lighthearted, cute, fun, and full of heartwarming romance. I really like how Boyle crafts her historical romance novels!

Like I mentioned above, I thought the plot outside the romance was a bit underdeveloped. Like, I knew there was supposed to be something going on outside of the romance, because that's what the author led us to believe, but it wasn't all there. Louisa and Lavinia's mother's scandal - I think that was the big plot thing, but it felt lacking. And then the ending was anticlimactic, honestly. But it was a nice ending.

If you love historical romance novels, then I have to recommend this one. Or any of the Rhymes With Love books. I love this series, and I'm definitely going to mark Elizabeth Boyle's name down for future books!

4 stars. I can't wait to read Lavinia/Tuck's story! The Knave of Hearts, I believe was mentioned at the end of this book. Spoiler alert!